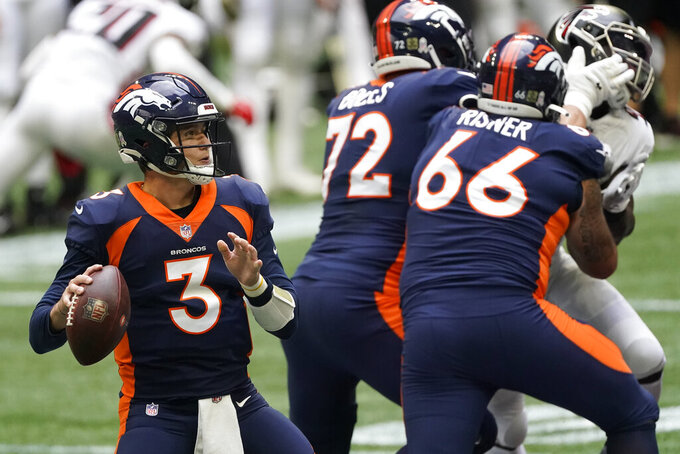 Denver Broncos quarterback Drew Lock (3) works in the pocket against the Atlanta Falcons during the first half of an NFL football game, Sunday, Nov. 8, 2020, in Atlanta. (AP Photo/John Bazemore)

ENGLEWOOD, Colo. (AP) — The Denver Broncos have a knotty path to avoid infamy.

They need a strong second-half surge to avoid becoming the first franchise in NFL history to miss the playoffs for a half decade following a Super Bowl triumph.

Making such a run is a daunting prospect for an injury-riddled team that’s 3-5 with their remaining opponents a combined 36-23. That slate features division leaders Kansas City (8-1), Buffalo (7-2) and New Orleans (6-2).

The Broncos had high hopes of catching the Chiefs in the AFC West this season after adding speed through the draft and muscle through free agency. But they’ve been ravaged by injuries and rattled by COVID-19 opt-outs, exposures and infections.

Von Miller aims to beat the odds and return from ankle surgery next month, but Courtland Sutton (knee), Jurrell Casey (biceps), Mike Purcell (foot) and Ja’Wuan James (opt-out) are all done for 2020 as is rookie Albert Okwuegbunam (ACL).

Coach Vic Fangio admonished his players not to gripe about losing their bye week last month when the NFL juggled the schedule in response to an outbreak of the novel coronavirus in New England.

Fangio suggested it just as easily could have been the Broncos dealing with a COVID-19 cluster.

Soon enough, it was.

In recent weeks, three Broncos players, three assistant coaches, two executives — GM John Elway and CEO Joe Ellis — and numerous staffers at team headquarters have either contracted the virus that causes COVID-19 or been exposed to it.

Infections by O-linemen Graham Glasgow and Darrin Paulo and an exposure to defensive end Shelby Harris forced the Broncos, who are one of 14 NFL teams in intensive COVID-19 protocols, to meet remotely and to cancel a practice in each of the past two weeks.

Those missed reps have caught up to Denver's young roster.

“That’s a real thing, I’m not going to deny it, but it’s also a convenient excuse and we’re not going to use it as an excuse,” Fangio said after the Broncos’ 34-27 loss at Atlanta on Sunday.

The Broncos have won just 30 of 72 games since winning their most recent Super Bowl title in Peyton Manning’s farewell game.

Much of the blame for this five-year funk goes to Denver starting over way too often and starting out slow way too much.

QB Drew Lock has started 11 games but missed 13 with thumb and shoulder injuries, thwarting both his development and Elway’s evaluation of him. Lock went 4-1 last December but Fangio fired offensive coordinator Rich Scangarello in January and replaced him with Pat Shurmur, the Broncos’ fifth OC since Super Bowl 50.

That turnover has made rhythm on offense as elusive as the end zone — which Denver has reached just five times before the half so far.

Denver’s defense isn’t without blame. The Broncos played poorly on both sides in falling behind 27-6 Sunday one week after trailing the Chargers 24-3. They roared back to win that one 31-30, but fell short in Atlanta.

“You’re just not going to be able to do stuff like that week in and week out in the NFL,” safety Justin Simmons said. “So, the point is that we’ve got to be able to play a full game.”

The Broncos have trailed by double digits at halftime the past three weeks and in five of their past seven games.

In the past two weeks, they’ve scored six fourth-quarter touchdowns, but Shurmur is sticking with his system and refusing to transfer the up-tempo approach to the first half.

Lock would love speeding things up from the get-go.

“You’re talking to a biased quarterback here who went up-tempo in I think three of my four years of college,” he said.

Fangio said his faith in Shurmur is unshaken despite the season-long struggles.

“My confidence is good. Pat’s an experienced guy. He’s been through this before,” Fangio said. “You know, the good thing about being experienced, you’ve seen the highs and the lows. Unfortunately, we’re going through the lows right now, but he’s had plenty of highs in his career, and we’re optimistic that we’ll get this thing turned around soon.”

LG Garett Bolles has gone from train wreck (46 flags in his first 48 games) to bullet train on track for a colossal payday.

Tight end depth. The Broncos’ room was the envy of the league two months ago but Jake Butt (hamstring), Austin Fort (knee) and Andrew Beck (hamstring) are on IR and Okwuegbunam is done for the year.

100: Rookie WR Jerry Jeudy had his first 100-yard game, catching seven passes for 125 yards and a TD against Atlanta.

“If we didn’t finish with a dub, it doesn’t mean anything,” said Jeudy, a first-round pick who has already lost more times in Denver (five) than he did in four years at Alabama (four).

“I think we’re all ready to stop the ‘It’s part of the process’ hoopla, whatever you want to call it, the ‘process’ or ‘young guys’ or whatever,” Lock said.

“There’s a lot of football left and we just have to hit our stride earlier in games.”