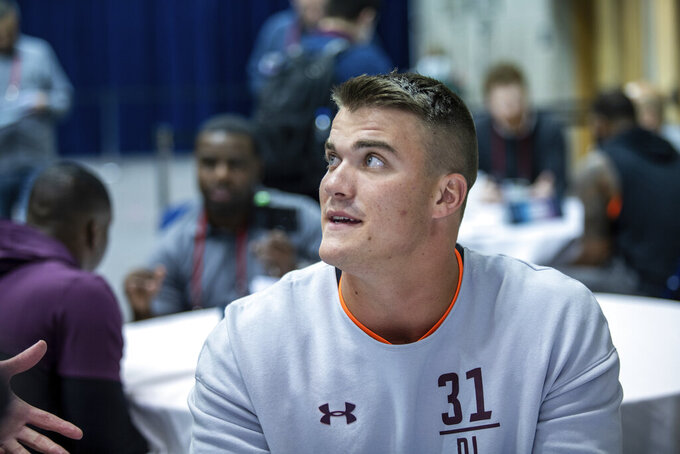 Charleston defensive lineman John Cominsky talks to the media at the NFL Scouting Combine on Saturday, March 2 2019 in Indianapolis. (Detroit Lions via AP) 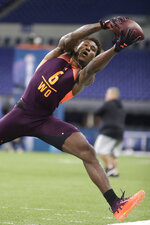 One of his former teammates at North Carolina A&T, running back Tarik Cohen, plays for the Chicago Bears. Another ex-college teammate, offensive lineman Brandon Parker, landed with the Oakland Raiders. Cornerback Tony McRae, a third A&T alum, is with the Cincinnati Bengals and Indianapolis Colts linebacker Darius Leonard, another Mid-Eastern Athletic Conference alum, is the league's newest defensive rookie of the year.

Johnson knows the names, stories and backgrounds and it's convinced him that he can be the next guy on the list.

"He's a guy from an HBCU (Historically Black College and University), who put in a lot of hard work and that's what I do," Johnson said Saturday when asked about Leonard. "He's a relentless effort guy and I'm the same way."

Making it to the NFL's annual scouting combine in Indianapolis could help pro scouts determine if they see the same similarities.

While Johnson is not the biggest name in a crowded class of talented pass-rushing ends and fast linebackers and he's not one of the enormous run stuffers, he certainly presents an intriguing profile.

Johnson recorded 16 1/2 sacks over the past two seasons, earning first-team all-conference honors both years and last year's MEAC defensive player of the year award — which Leonard took in 2016 and 2017.

"Coming from a HBCU, coming out early, I feel like I'm making a statement for all the HBCUs so they won't sleep on black college football," said Johnson, a redshirt junior who gave up his final year of eligibility to enter the draft. "A lot of legends played back college football."

Where exactly Johnson fits into this year's draft is still to be determined.

But his much is clear: Passing on small-school college players comes with its own perils.

This year's draft class should be no exception.

Pass-rushing specialist Oshane Ximines became the first Old Dominion player to make the Senior Bowl, could be the first player drafted from the Virginia school and if things go well between now and April, he could be a first-round pick.

Ximines was a late bloomer. He didn't start playing football until he was a high school freshman then moved from safety to the defensive line after growing six inches and adding 30 pounds between his freshman and sophomore seasons.

"My parents knew nothing about football," Ximines said. "They're from Jamaica so they leaned mostly toward soccer. But when I told my mom I got my first scholarship offer, she was like 'They offer scholarships for that?'"

Ximines didn't just take the scholarship he made the most of his opportunity after redshirting his first year on campus. He finished his career with 33 sacks, 51 1/2 tackles for loss and 11 forced fumbles — all school records — and the kind of moniker coaches and general managers love to hear.

"We say he's the ultimate Monarch," said Old Dominion receiver Travis Fulgham who is also at the combine. "He's a perfect student-athlete. He's always making big plays for us. He's a leader on and off the field."

Then there's defensive lineman John Cominsky, an Ohio native who played quarterback in high school and needed a recommendation just to get a shot at playing for the University of Charleston.

Now, after turning heads there, he's on the verge of becoming the first draftee from that Division II school.

"I think you just have to dominate at your level and make enough noise," Cominsky said. "You can do it wherever you play. You just have to make some plays."

And after hearing the advice of Cohen and Parker and watching McRae and Leonard succeed, Johnson believes this is his chance to make a splash.

"Everybody in the MEAC is fast," Johnson said. "We're not the biggest guys, but we run to the ball and I think that helps us as the league changes."