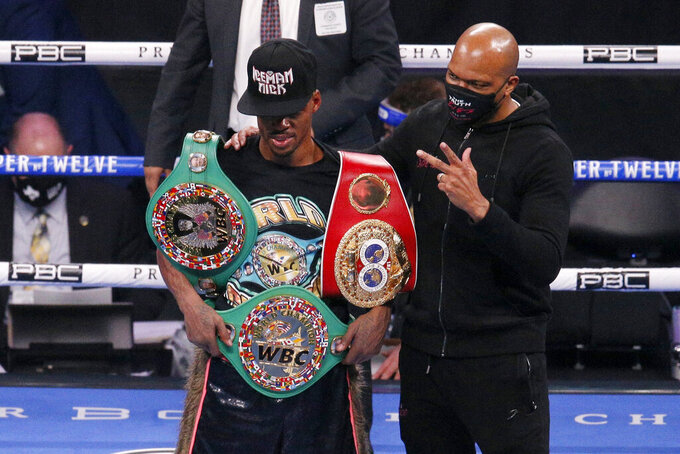 ARLINGTON, Texas (AP) — Errol Spence Jr. skipped a tune-up in his first fight since a car crash that almost derailed his promising career.

Spence defended his WBC and IBF welterweight championships, looking sharp in a unanimous decision over Danny Garcia on Saturday night by controlling the pace almost from the start in another defense on his home turf.

Judges Steve Weisfeld and Barry Lindenman scored it 116-112, with Tim Cheatham giving Spence a decided 117-111 edge at the home of the Dallas Cowboys, the NFL team that has adopted the 2012 U.S. Olympian and rising star.

Spence's third defense in his hometown came 14 months after a high-speed crash near downtown Dallas.

“All training camp I felt good,” Spence said. “I told people I didn’t want a tune-up fight. I proved to everyone that I’m the best 147-pound fighter in the world.”

Spence flipped his Ferrari and was ejected but escaped without serious injuries while getting charged with drunken driving in October 2019. That was about a month after a thrilling split-decision victory over Shawn Porter in Los Angeles that added the WBC belt to his IBF strap.

The 30-year-old changed his lifestyle, moving out of downtown Dallas for a quiet life on a ranch in the suburbs and immersing himself in training once doctors told him it was OK to fight again.

“This was a long, long road to come back,” Spence said. “Just buckling down and staying focused, the trials and tribulations to get to this point tonight. And I got to that point and it paid off. I feel like I’m here for a reason and I basically proved that I’m back and I’m here to stay.”

Spence (27-0, 21 knockouts) went the distance for the third straight time to beat Garcia (36-3, 21 knockouts). Garcia's three losses have come in his last six fights. The Philadelphia fighter was in his first title bout in two years.

“He was the better man tonight,” Garcia said. “No excuses. I fought a hard and tough fight. He had a good jab and that was the key to the fight. He was also a bit busier than me.”

The crowd of 16,102 was considered a sellout in the pandemic. It filled about 20% of AT&T Stadium's 80,000-seat capacity, with fans spread through all four decks and spacing between a few hundred pairs of chairs at ring level.

Garcia tried to surge late, landing a right near the end of the 11th round that sent Spence looking for his corner just as the bell sounded with Garcia closing in for more.

With Garcia's right eye and nose swollen — the latter after a small cut in the early rounds — the 32-year-old tried to keep the momentum in the final round but Spence steadied himself as both fighters tried to land one last big punch before the final bell.

Both landed several punches in the most intense stretch to that point in the middle of the eighth round. Spence pinned Garcia on the ropes with a series of blows before Garcia escaped and steadied himself before the end of the round.

“His jab was rangy and threw my timing off a bit,” Garcia said. “That was the key to the fight. Everything else I feel like I adapted to. The jab was the only thing that was better than expected.”

WBO champion Terence Crawford was in the crowd, drawing a big cheer when he was shown on the giant video board above the ring. Whether that is Spence's next opponent was the obvious question after the fight.

“I’m not thinking about that,” Spence said. “I'm thinking about seeing my kids tomorrow and chilling at my ranch and finally riding my horses after 10 or so weeks and just chilling out and eating some good food. We’ll see what holds the future.”

Sebastian Fundora dominated late replacement Habib Ahmed in a WBA super welterweight title eliminator on the undercard, winning by technical knockout halfway through the second round.

The 22-year-old Californian staggered Ahmed with a left hand in the first round, and Ahmed's corner asked the referee to step in with the Ghanan getting pummeled along the ropes in the second.

The 6-foot-6 Fundora (16-0-1, 11 knockouts) used his six-inch height advantage to control Ahmed (27-2-1) from the opening bell. Ahmed replaced Jorge Cota, who tested positive for COVID-19 days before the fight.