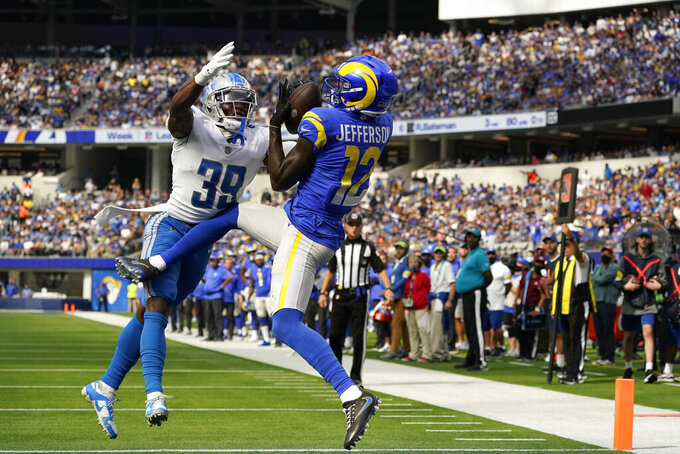 LOS ANGELES (AP) — The Los Angeles Rams were trailing 10-0 midway through the first quarter before Matthew Stafford even got to touch the ball Sunday in his reunion game with the Detroit Lions.

Stafford and the Rams (6-1) then went about demonstrating just how well they can handle unexpected circumstances while keeping their season on an upward trajectory.

Stafford called the Lions' special teams-fueled early surge "as strange of an opening part of a game as I’ve been a part of. But I thought we were even-keeled. I think that started from our head coach all the way down. Everybody did a great job in weathering the storm and knowing that if we went out there and executed what we were supposed to do, we were going to be in a good place.”

The Rams' confidence is grounded in four consecutive winning seasons and compounded by their improvements this year since Stafford replaced Jared Goff behind center.

Between that institutional sturdiness and Stafford's uniform excellence, Los Angeles clearly believes it will be a contender no matter what it encounters in the remaining 10 games of the regular season and beyond.

After holding off the lively but winless Lions for a 28-19 victory, the Rams banked the lessons from a weird afternoon and pledged to use them to get better.

“(There was) a lot of adversity we had to overcome,” coach Sean McVay said. “I thought the guys weathered the storm.”

Stafford made sure the Rams did plenty of good things while surging back into the lead and then holding on. The quarterback passed for 334 yards and three touchdowns, and his offense converted nine of its 13 third down attempts.

Los Angeles also didn't commit a turnover, while the defense intercepted two of Goff's passes, both in the fourth quarter.

More change arrives this week after the Rams traded linebacker Kenny Young to Denver on Monday. Los Angeles abruptly jettisoned its second-leading tackler and a key defensive playmaker in a move driven by the minor salary cap flexibility it created, McVay said.

“It all came together really quickly,” McVay said. “Sometimes you have to make decisions like that that aren't always the easiest, but you feel like with the big picture in mind are the best thing for us. That's what we had to do. ... It gives you the ability to explore possibilities if we feel like it upgrades the roster.”

Filling Young's cleats could be difficult for the Rams, who don't have another inside linebacker with extensive experience. Rookie Ernest Jones will be asked to step up, and Troy Reeder will take on more responsibilities.

The Rams' passing offense is again one of the NFL's best after being confoundingly mediocre for the previous two seasons.

Only Tom Brady and Derek Carr have thrown for more yards this season than Stafford's 2,172, and he has a higher completion percentage than both. Only Brady has more TD throws than Stafford's 19.

The Rams' offensive line has allowed the fewest sacks, and Stafford's passer rating (116.7) is higher than every healthy quarterback except Kyler Murray (116.8).

Even with cornerback Darious Williams returning from injury in November, the secondary still could use some help. Undersized veteran Donte Deayon played 88% of the defensive snaps two weeks removed from the practice squad, stepping up after rookie Robert Rochell got hurt.

Relying on Rochell, David Long or Deayon to play a major role at cornerback still seems like a sketchy idea for a Super Bowl contender.

With yet another strong game, Leonard Floyd continued to show he's not relaxing after getting his big free-agent payday from the Rams. The linebacker made seven tackles and was a constant menace on the pass rush. Along with his team-leading 4 1/2 sacks, he's their sixth-leading tackler overall.

Special teams coordinator Joe DeCamillis' group had a day to forget. The Rams were bamboozled on an onside kickoff and on two fake punts — once with a run and once with a pass when Nick Scott got beaten. The mistakes were even more infuriating because McVay acknowledged the Rams had expected the Lions to use some trickery. McVay also said the Rams blocked ineptly on kickoff returns.

Rochell sat out late with a knee injury, and safety Jordan Fuller also injured his knee. Left tackle Andrew Whitworth finished the game with an injured knee, while defensive tackle Sebastian Joseph-Day strained his pectoral muscle and linebacker Terrell Lewis has a rib injury. All five players are unlikely to practice Wednesday, but McVay is hopeful all will play Sunday.

A trip to Houston (1-6) on Sunday for the third stop in what looked like a soft month of the Rams' schedule before the superb recent play by Tennessee, the following week's opponent.