Staley, Herbert looking to get Chargers back into contention 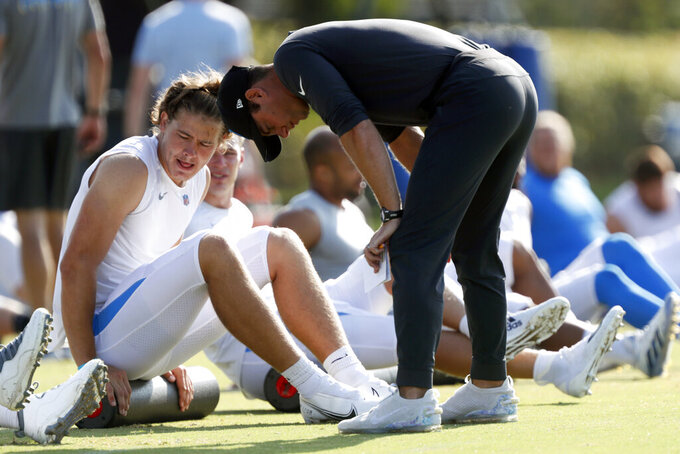 COSTA MESA, Calif. (AP) — A lot has changed in a year for Brandon Staley and Justin Herbert.

Heading into last year's opener, Staley was preparing for his first game as defensive coordinator for the Los Angeles Rams. Herbert was taking second-string snaps and adjusting to life in the NFL.

Now, they're together as the Los Angeles Chargers open against the Washington Football Team on Sunday. Staley is preparing for his head coaching debut, and Herbert is entrenched as the franchise quarterback after a record-setting rookie season.

Staley hopes their experiences from last season make them better going into this year.

“I think when you’re in the NFL, you just learn so much more. One year ago, guys, what he knew and what I knew are totally different,” Staley said. “I look back at my tape last year, I’m like, ‘man, I wasn’t very good,’ You know, compared to where I am now. And I think that that’s how he feels.”

Even though Herbert set rookie records for touchdown passes and 300-yard games in 15 starts, it wasn't enough to keep the Chargers from finishing 7-9. That led to Anthony Lynn's firing after four seasons and the hiring of Staley, who made the Rams' defense the top-rated unit in the league.

Since being hired, Staley has made it a point to build relationships throughout the franchise. He immediately built one with Herbert, calling him less than an hour after getting the Chargers job.

“He builds relationships immediately with all his players. That meant a lot to me for him to reach out shortly after everyone found out (he was hired),” Herbert said.

Staley has got the rest of the roster to buy in with some different approaches during offseason workouts and training camp. The OTAs were conducted at a walkthrough pace during 11-on-11 drills, while training camp practices stressed in-game situations starting the first day.

The 38-year old Staley — who is five years removed from being a defensive coordinator at Division III John Carroll University — also made it a point at the start of installing the offensive and defensive systems of explaining the philosophy, before going through plays.

“By doing that in a general way first, I think that you create more buy-in. Then, what that allows you to do is get to the specifics quicker.”

Staley also isn't afraid to admit to his players when something he planned didn't go right. Last week, he explained during a meeting with the team a scheme he didn't coach well enough with the Rams last season, and how he planned to fix it moving forward so that it doesn't happen with his new team.

"That’s what players want. They just want to be able to see, ‘Yeah, alright, you are right, coach, you jacked that up.’ This is going to help us moving forward. It’s having a breakthrough like that with them,” Staley added.

Herbert, Staley and offensive coordinator Joe Lombardi have spent the past couple months trying to refine an offensive system that is a blend of different schemes, formations and personnel groupings. The philosophies range from Sean Payton's system in New Orleans, where Lombardi was quarterbacks coach, to play-action packages run under Sean McVay and Kyle Shanahan.

Now that Herbert has had training camp and two practices against the San Francisco 49ers to go through everything, he has a better idea of what will work best.

“It has been a tough scheme that we have had to learn, but all the guys here have put in a lot of effort. It's been going pretty well so far,” Herbert said. “I know that we got the guys and the talent here. We just have to go out and execute. That’s ultimately what it comes down to.”

Despite what was considered to be a successful training camp, Staley knows that the relationship with his quarterback and the team is still a work in progress. It also takes on a different level now that the games count for real.

“Now we get to respond to real game competition, and we’ll know where our relationship is as the season goes on. Because once you start playing games and lots is at sake, that’s when you really got to test your relationship,” Staley said.

Notes: Running back Austin Ekeler's status for the opener is in doubt after he did not practice Wednesday due to a hamstring strain. ... Offensive tackle Bryan Bulaga is on track to start after being a full participant in practice. The veteran right tackle had been plagued by a groin injury during most of training camp.