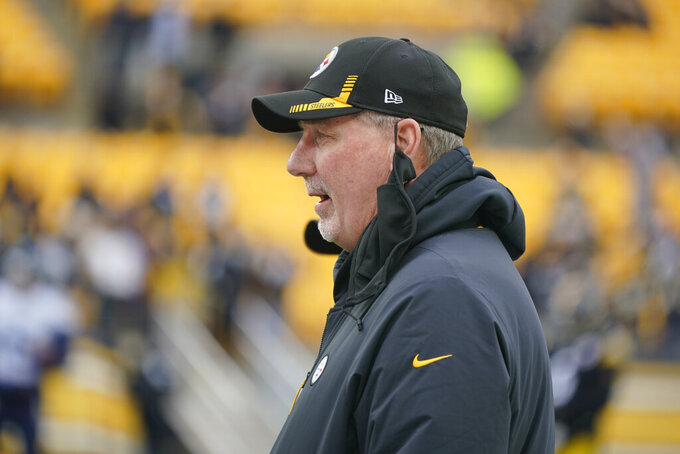 FILE - Pittsburgh Steelers defensive coordinator Keith Butler watches players warm up for an NFL football game against the Tennessee Titans, Dec. 19, 2021, in Pittsburgh. Butler retired on Saturday, Jan. 22, less than a week after his 19th season with the team ended in a blowout playoff loss to Kansas City. The 65-year-old Butler, who spent 10 seasons as a linebacker for the Seattle Seahawks in the 1970s and 80s before getting into coaching, helped the Steelers win two Super Bowls and reach another during his nearly two decades with the team. (AP Photo/Gene J. Puskar, File)

PITTSBURGH (AP) — Pittsburgh Steelers defensive coordinator Keith Butler retired on Saturday, less than a week after his 19th season with the team ended in a blowout playoff loss to Kansas City.

The 65-year-old Butler, who spent 10 seasons as a linebacker for the Seattle Seahawks in the 1970s and 80s before getting into coaching, helped the Steelers win two Super Bowls and reach another during his nearly two decades with the team. He served as the linebackers coach from 2003-14 and was promoted to coordinator in 2015 after Hall of Famer Dick LeBeau's contract was not renewed.

“I have spent every year since 1990 as a coach in the NFL and the NCAA, but the time is right for me to walk away after a successful career both playing and coaching the game I love,” Butler said in a statement.

Coach Mike Tomlin said earlier in the week that Butler had told him informally he was thinking about stepping down. Pittsburgh (9-7-1) made the playoffs this season while enduring its worst statistical season defensively since 1988.

The Steelers finished 24th in yards allowed and were last in the league against the run. Thanks in large part to All-Pro outside linebacker T.J. Watt, Pittsburgh did lead the NFL in sacks for a fifth straight season.

The issues were widespread, starting with a lack of depth along the defensive line after Stephon Tuitt underwent knee surgery over the summer and veteran nose tackle Tyson Alualu went down in Week 2 with a fractured ankle.

Butler, who spoke with a homespun drawl that showed his Alabama roots and was particularly fond of saying “dadgummit,” spent most of the season collaborating with Tomlin searching for answers that never really came. Tomlin made no secret that he was heavily involved in the defensive playcalling, making it a point earlier in the season that he did “more than suggest” calls to Butler.

Despite the uncharacteristically shoddy play, the Steelers snuck into the playoffs but were throttled by the high-powered Chiefs in the first round.

“I look forward to spending more time with my family, whom have been so supportive of me throughout the years,” Butler said. "I wish nothing but the best to the Pittsburgh Steelers, and I will be cheering them on during my retirement.”

Butler's career in the NFL began in 1978 when the Seahawks drafted him in the second round out of Memphis State. He appeared in 146 games across 10 seasons as the Seahawks morphed from expansion team to power while playing in the AFC West. He finished with 11 1/2 sacks and eight interceptions during his decade in Seattle.

Butler broke into coaching at Memphis State in 1990 and spent 1998 as the defensive coordinator and linebacker coach at Arkansas State, where his staff included Tomlin, the defensive backs coach at the time.

Butler reached the NFL in 1999 when he got a job with Cleveland and was lured to Pittsburgh in 2003 to join Bill Cowher's staff. Butler's pupils during his 12 seasons as the linebackers coach included James Farrior and 2009 Defensive Player of the Year James Harrison.

Tomlin promoted Butler in 2015 and gave him the mandate to return the Steelers to the glory of their “Blitzburgh” past. Butler delivered in that department. The Steelers have led the NFL in sacks each season since 2017.

The defense, however, sagged in the playoffs. The Steelers have been lit up in each of their past three postseason appearances, giving up 45, 48 and 42 points in the process.

Pittsburgh has a potential replacement on staff in Teryl Austin. Austin, who has spent the past three seasons as a senior defensive assistant and previously served as the defensive coordinator in Cincinnati and Detroit.

Whoever gets the job inherits a unit that has some serious holes to fill. While Watt, All-Pro defensive lineman Cam Heyward and safety Minkah Fitzpatrick give the Steelers difference-makers at all three levels, there are also depth concerns along the line and at linebacker. The secondary is also in need of help with veteran cornerback Joe Haden and safety Terrell Edmunds entering free agency.