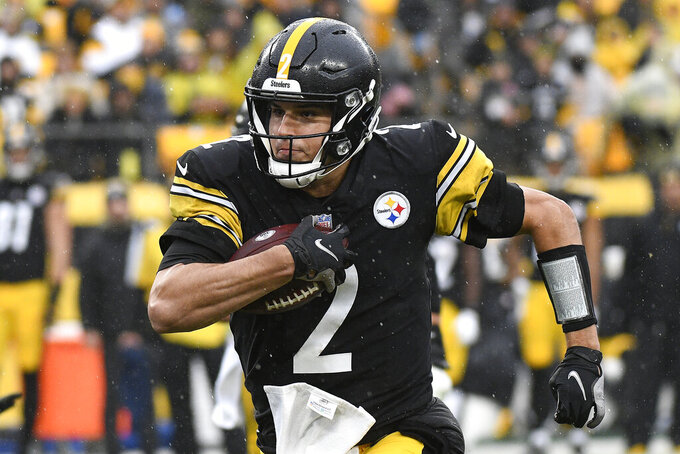 PITTSBURGH (AP) — Mason Rudolph is practicing as if he's going to start on Sunday night when the Pittsburgh Steelers face the Los Angeles Chargers.

Of course, the longtime backup quarterback has no idea if all that preparation will lead to him being under center on the first play. That's just the nature of things during the COVID-19 pandemic.

While Rudolph ran with the starters on Thursday, Ben Roethlisberger continued to participate virtually while the team held out hope their 39-year-old star will be removed from the COVID-19 list in time to head west.

“I’ve talked to (Roethlisberger) every day,” Pittsburgh offensive coordinator Matt Canada said. "Talked about the plan, talked about what we’re thinking. He’s also met with (quarterbacks coach Mike Sullivan) every day and gone through the specifics of those things.”

Roethlisberger tested positive for COVID-19 last Saturday and went onto the COVID-19 list less than 24 hours before Pittsburgh's game against Detroit. Rudolph started instead, playing unevenly during an ugly 16-16 tie against the winless Lions that halted the Steelers' four-game winning streak.

While he passed for 242 yards and a touchdown and ran for another 36, he also threw an interception and missed badly on a handful of what looked like relatively routine plays, including short-hopping what would have been a 9-yard touchdown to Ray-Ray McCloud.

“I thought there were some throws I missed,” Rudolph said. “But I was proud of the way we battled back and put ourselves in a position there to win the game a couple times in their territory.”

The start came at an interesting juncture in Rudolph's career. The team signed him to a one-year extension that carries through 2022, meaning he could be in the mix to take over full time if Roethlisberger decides to retire at the end of this season. Coach Mike Tomlin has repeatedly backed Rudolph, who is a respectable 5-4-1 as a starter, with most of those starts coming while he filled in for an injured Roethlisberger in 2019.

“I don’t think any of us were surprised by the things that he was able to do for us,” Tomlin said of Rudolph. “As a matter of fact, we expected it. I know he expected it. I think that was his 10th start for us now, and so it’s not something that’s troublesome or worrisome. We just expect that guy to play winning football for us.”

Unlike last week, when the Steelers had little time to prep for a quarterback switch, Pittsburgh will have a Rudolph-specific game plan in place if he's the starter, though Tomlin stressed there isn't much difference between the one reserved for Rudolph and the one reserved for Roethlisberger.

“It’s not like Mason Rudolph runs 4.4 (40-yard dash) and all of a sudden, we’re going to start doing some run-pass options and things of that nature,” Tomlin said. “It’s not as significant a discussion as one would imagine. There are probably more likes and dislikes or feel-related things relative to the in-helmet perspective of the position.”

A year ago, Roethlisberger spent four days in COVID-19 protocols ahead of a game against Cincinnati. He did not practice all week but hardly looked rusty, throwing for 333 yards and four touchdowns, so there's little chance he won't play if he's cleared.

“I think anytime you can’t play, every week that I don’t play, I feel a little bit of disappointment, yes,” Rudolph said. “That’s the battle between self and team. We’re all going to feel that way inside, but at the end of the day, what matters is the team and going out and winning the game.”