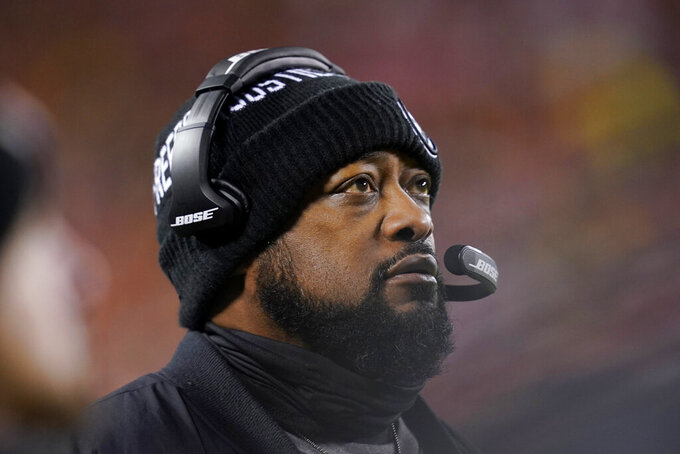 PITTSBURGH (AP) — For the first time in Mike Tomlin's long tenure as the head coach of the Pittsburgh Steelers, he enters the offseason unsure of who his starting quarterback will be in the fall.

The only certainty is that it won't be Ben Roethlisberger, who has given every indication he will retire after an 18-year career.

Maybe it'll be Mason Rudolph, who has spent four years as an understudy with mixed results and is currently the only quarterback on the roster under contract for next season. Maybe it'll be Dwayne Haskins, who flamed out in Washington before being given a lifeline by Tomlin last January. Maybe it'll be a rookie. Or maybe a veteran free agent in need of a job.

To Tomlin, it's a little exciting. And yeah, maybe a little weird.

Rudolph is 5-4-1 in his career as a starter, but struggled in his lone extended appearance this season, throwing a touchdown and an interception i n an ugly tie with Detroit in November after Roethlisberger tested positive for COVID-19. Haskins flamed out in less than two seasons with Washington after being taken with the 15th overall pick in 2019 and served as Pittsburgh's third quarterback in 2021.

“They’re guys that started,” Tomlin said. “I wouldn’t characterize them as everyday starters ... And so they’ll be given an opportunity to establish themselves, and there's going to be competition.”

Tomlin has made no secret that he'd like to find a quarterback who can move, something that hasn't been in Roethlisberger's toolbox for several years.

“Man, quarterback mobility is valued not only by me, but everyone is just a component of today’s game and increasingly so,” Tomlin said.

While the identity of whoever might run the offense in 2022 is a mystery, there appears to be some clarity on who will be calling the plays. Tomlin acknowledged the offense fell short under first-year offensive coordinator Matt Canada while ranking in the bottom half of the league in yards and points, but hinted Canada will be given another shot.

“I’m not expressing satisfied satisfaction with any component of (the offense),” he said. “I’m just acknowledging that, you know, he brings things to the table that are attractive and we need to be better and we will be.”

The situation appears more unsettled elsewhere on the coaching staff and front office. Pittsburgh shook up the staff after playoff losses in 2017 and 2020, and the next few weeks could be no different.

General manager Kevin Colbert, whose contract is up after the draft and just celebrated his 65th birthday, has hinted he may be ready to move into a more advisory role after more than two decades with the club. Longtime defensive coordinator Keith Butler, who turns 66 in May, has indicated in informal conversations that his 19th season with the organization will be his last.

The Steelers have won two Super Bowls and been to three during Butler's long run, but the defense had its worst statistical season in 30 years and finished last against the run. A logical replacement for Butler is already on staff in Teryl Austin, who served as an assistant coach on three teams that reached the Super Bowl and joined the Steelers as a senior defensive assistant and secondary coach in 2019.

Pittsburgh could also look in-house to fill the offensive line coach opening created when Adrian Klemm left last month to take the same job at Oregon. Chris Morgan filled in over the final three games and the Steelers had their best rushing performance in four years in a victory over Cleveland on Jan. 3 in what was likely Roethlisberger's final home game.

For a team built on continuity, there could be considerable roster turnover — at least by Pittsburgh standards — over the next few months. The Steelers have more than $40 million to spend in free agency, a number that could rise with additional roster moves before the league year officially begins.

The status of veterans such as defensive linemen Stephon Tuitt and Tyson Alualu is unknown. Alualu was lost for the season after fracturing his ankle in Week 2 and Tuitt didn't play at all after undergoing knee surgery over the summer. They are on the books for a combined $11.5 million and Tomlin said he has yet to talk to them about 2022.

There will be difficult discussions in the coming weeks. Talks made necessary after going “one and done” in the playoffs for the third time in five years.

“I understand change is a part of our business and, you know, I don’t run away from it,” he said. “I’m not overly resistant to it. I don’t run to it as well. I don’t change for the sake of changing. I’m open to change where appropriate.”