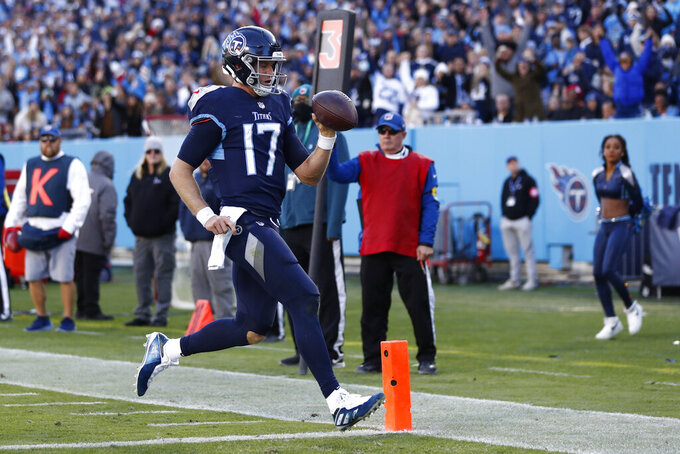 Tennessee Titans quarterback Ryan Tannehill (17) runs into the end zone for a touchdown against the Jacksonville Jaguars during the second half of an NFL football game, Sunday, Dec. 12, 2021, in Nashville, Tenn. (AP Photo/Wade Payne)

PITTSBURGH (AP) — Ben Roethlisberger still believes the Pittsburgh Steelers have what it takes to be a playoff team.

Time is running out, however, to prove it.

“We've got to make a run,” Roethlisberger said.

At this point, one step in the right direction would be considered progress.

The Steelers (6-6-1) have been spinning their wheels for more than a month heading into a visit by AFC South-leading Tennessee (9-4) on Sunday, mired in a five-game funk in which they've won just once and been bullied in a way they haven't been bullied in decades.

A defense that finished third in the league last season is now in danger of finishing in the bottom 10 for the first time in 30 years. While Roethlisberger and the rookie-laden offense have had their fair share of issues, it's what's happening on the other side of the ball that's been far more alarming.

Three times in the last month the Steelers have found themselves trailing by at least 17 points. Twice they put together rallies to make it respectable, but respectable margins don't count in the win column — though it's telling of how wide open the underwhelming AFC North is that Pittsburgh finds itself in the mix as Christmas looms despite just two victories since Halloween.

“You can't spend a lot of time looking at big-picture perspective,” Tomlin said.

Maybe because the smaller picture is so daunting. The Titans are in a position to win their second straight division title even without star running back Derrick Henry, who hasn't played since October due to a foot injury. Tennessee has found a way despite having 50 different players start at least one game. Only New Orleans has had more.

Tennessee's success is a testament to its depth and the steadying presence of coach Mike Vrabel.

“Things haven’t been perfect for us up until this point, but we have ourselves in a good situation,” Tennessee quarterback Ryan Tannehill said. “Coach Vrabel has talked about this last two weeks and that is that we are just getting started. Have a lot of football out in front of us and we want to play our best football here down the stretch.”

HURRY UP OR WAIT?

Pittsburgh's 144 fourth-quarter points are tops in the NFL. Most of those have come out of necessity while the team attempts to play catch-up. They've also come with Roethlisberger running the no-huddle offense in an effort to save time.

First-year offensive coordinator Matt Canada has been reluctant to use it earlier in games because of the burden it places on a still relatively inexperienced offensive line. Still, 13 games in, it might be time to just hand the keys to Roethlisberger in the first half and see if it can jump-start a unit that's been a notoriously slow starter much of the year.

Regardless of what speed Pittsburgh plays at, Roethlisberger believes it's time for the offense to start avoiding the false starts and sloppiness that has dogged it at times.

“I think we just need to play smarter football,” he said.

The Titans have beaten each of the seven 2020 playoff teams they've faced already this season and will go for a full sweep Sunday. If Tennessee beats the Steelers — the defending AFC North champions — it would join the 2007 New England Patriots as the only teams since the 1970 NFL-AFL merger to beat all eight teams that made the playoffs the year before.

The Titans have already used 86 players this season, an NFL record. There's hope that number won't tick much higher with the playoffs looming in a month.

Wide receiver Julio Jones is among three who came off injured reserve before their last win over Jacksonville. Outside linebacker Bud Dupree, who starred at Pittsburgh before signing with the Titans last spring, could have a chance to return off injured reserve himself Sunday against his former team. Tennessee's injury report is at its shortest in weeks with only eight Titans listed.

When outside linebacker T.J. Watt is healthy and available, the Steelers are dangerous. Pittsburgh is 6-2 when Watt plays a full four quarters and 0-4-1 when he is limited or out entirely. Watt left the loss to Minnesota in the first half with a groin injury but there's hope he'll be available on Sunday.

The Titans have been leaky along the line. Tannehill has absorbed 37 sacks and any chance the Steelers have of pulling the upset will rely heavily on if they can get to Tannehill and force him to make mistakes.

The Titans took a big hit losing Derrick Henry, then the NFL's rushing leader, to a broken right foot on Oct. 31. But they have found a way to keep running without the reigning NFL Offensive Player of the Year, settling on D'Onta Foreman and Dontrell Hilliard as a running back by committee approach.

They helped Tennessee run for 270 yards in a loss to New England last month. Tennessee ranks fifth in the NFL averaging 137.8 yards rushing per game. Foreman is averaging 4.4 yards per carry. Hilliard is even better at 7.2 yards per rush. Then there's Tannehill, who has six TDs rushing, one shy of his career high set last season.