Taylor-made day sends Colts past Jags, back into playoffs 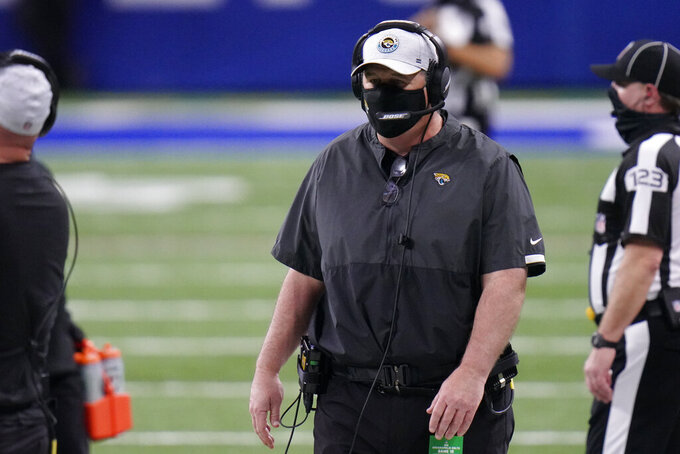 Then he hit the accelerator.

The rookie ran for a franchise-record 253 yards, scored twice and sprinted 45 yards to the end zone with 3:35 to play, powering the Colts to a playoff-clinching 28-14 victory over the Jacksonville Jaguars on Sunday.

“There’s not many times you have (a game like) that,” 39-year-old quarterback Philip Rivers said. “I don’t know that I’ve ever been around that. I know LT (LaDainian Tomlinson) had some big days, so I don’t want to say he didn’t have anything like that. But just an unbelievable day.”

Tomlinson's best was a 243-yard performance against the Raiders in 2003 — one year before Rivers arrived in San Diego and three years before Rivers made his first start.

Taylor's breakout game, given the circumstances, will never be forgotten by Colts fans.

One week after a blown 17-point, third-quarter lead at Pittsburgh put Indy on the cusp of missing the playoffs altogether, Buffalo provided the help the Colts needed with a 56-26 rout of Miami earlier Sunday.

That meant the Colts (11-5) were in the seven-team playoff field with a win. The No. 7 seed heads to Buffalo on Saturday, its first postseason appearance since 2018 and its second since 2015, thanks largely to Taylor.

He got started with a 56-yard burst on Indy's third play, which set up one score. His 1-yard TD run in the second quarter made it 17-0.

Jacksonville (1-15) finally responded with a touchdown in the final minute of the first half and another in the third quarter to close within 20-14 and it looked like Indy might squander another big lead.

Taylor made sure it didn't happen with his late dash to the end zone.

“It just felt like he was running great and we kind of had an idea we were going to do that,” coach Frank Reich said. “This is such a big game and he’s been in beast mode as we’ve said. So he’s earned that right and he certainly looked great today.”

Hall of Famer Edgerrin James was the only other Colts player to top 200 yards. He had a 219-yard game at Seattle in October 2000 then ran for 204 yards four years later at Chicago.

Jacksonville concluded a historically bleak season. The Jags lost their final 15 games after beating the Colts in the season opener. Along the way, they benched their opening-day starting quarterback, fired their general manager and clinched the No. 1 overall draft pick.

More changes could be coming Monday. Coach Doug Marrone is 12-36 since leading Jacksonville to the AFC championship game following the 2017 season and seems resigned to the possibility of losing his job. He said he spoke to team owner Shad Khan before the game about reports that Urban Meyer could replace him.

“I think when the record is what it is, you have to be able to expect those things,” Marrone said. “But like I said before, I asked about it. It was like new news for us. We’ll see what happens.”

Colts: Jared Veldheer started in place of injured LT Anthony Castonzo, and the Colts were without two starters in the secondary — S Khari Willis and CB Rock Ya-Sin. Neither defensive back cleared the concussion protocol. RB Jordan Wilkins went on the COVID-19 reserve list Sunday, too.

Jaguars: Laviska Shenault Jr. caught two TDs in the same game for the first time in his career. ... Chris Conley had seven receptions for a season-high 87 yards. ... Mike Glennon was sacked six times. ... The Jaguars rushed 17 times for 53 yards.

Colts: Rivers' TD pass, No. 421, broke a tie for fifth on the NFL's career list with Dan Marino. Rivers also passed Eli Manning (8,119) for No. 6 in league history in career attempts. He now has (8,134). ... T.Y. Hilton caught his 50th career TD pass, tying the late Jimmy Orr for fourth on the franchise list. ... Rodrigo Blankenship finished with 32 field goals, breaking Raul Allegre's franchise record for a rookie. It was set in 1983.

Jaguars: Face a long offseason and probably a major overhaul. If Trevor Lawrence is on the way, though, it could be worth the wait.

Colts: At Buffalo next Saturday in the first of six wild-card round games.