Telesco says Chargers will be patient with coaching search 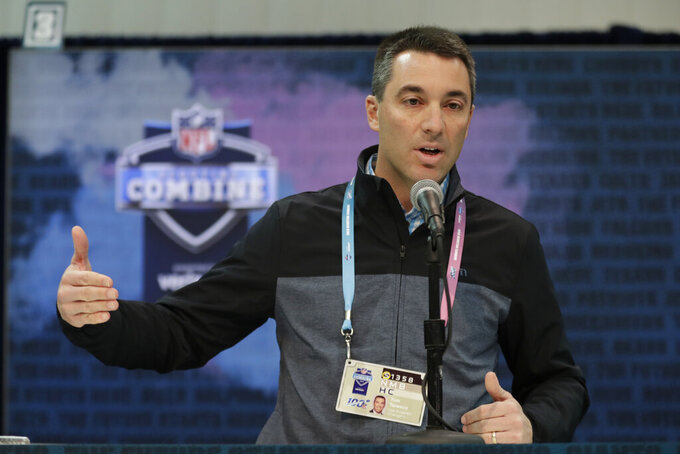 FILE - In this Feb. 28, 2019, file photo, Los Angeles Chargers general manager Tom Telesco speaks during a news conference at the NFL football scouting combine in Indianapolis. Telesco hasn't given a timetable on when he expects to hire a coach, but did say he would be patient if their preferred candidate was on a team that advanced to the Super Bowl. (AP Photo/Michael Conroy, File)

COSTA MESA, Calif. (AP) — Los Angeles Chargers general manager Tom Telesco hasn't given a timetable on when he expects to hire a coach.

However he did say he would be patient if their preferred candidate was on a team that advanced to the Super Bowl.

"If it’s something that we have to wait for. We’ll wait. We’ll wait and we’ll make it work,” Telesco said on Wednesday.

Telesco spoke two days after the Chargers fired Anthony Lynn as coach. Lynn had a 33-31 regular-season mark in four years, including 1-1 in the postseason.

Lynn led the Chargers to the playoffs in 2018, but they were 12-20 the past two seasons. Los Angeles was 3-9 at one point before ending the season on a four-game winning streak.

Telesco lauded Lynn for helping the franchise transition from their move from San Diego in 2017 to his discussions of race issues this past season. However, the team's recent on-field struggles — which included blown double-digit leads and a 7-16 mark in one-possession games — resulted in Lynn's dismissal.

“I really feel like he made me a better GM. So, but, you know, just quite simply, we just didn’t win enough games the last two years,” Telesco said. “Is that all on the head coach? Obviously not. It’s a partnership between myself and the head coach and I need to do a better job getting this team over the hump.”

Telesco said he would cast a wide net during their search and that one of the benefits of the current COVID-19 protocols is that a lot more preliminary interviews can be done via Zoom.

The Chargers have gone with first-time head coaches the past two times, but that doesn't mean they limit their search this time to those with head coaching experience.

After a successful rookie season by quarterback Justin Herbert, Telesco also said a prerequisite wouldn't be that the new coach is a former offensive coordinator or assistant.

Telesco will be charged with making his third head coaching hire. Since being hired as general manger in 2013, the Chargers are 60-68 and have made only two postseason appearances. They also haven't won a division title since 2009.

Telesco did address frustration over the Chargers not being able to win at a sustained level, but thinks there is a solid core of players — such as Herbert, defensive end Joey Bosa and safety Derwin James — to build around.

“We have an opportunity to ascend and ascend quickly,” Telesco said. “We’ve got work to do. Obviously it’s nowhere near a perfect roster, but I think we got a bright future here.”