Titans left tackle Lewan back from concussion, Jones out 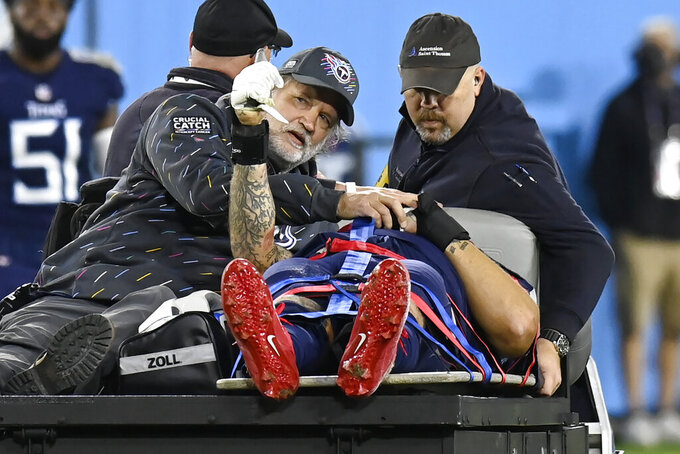 Tennessee Titans offensive tackle Taylor Lewan gives the thumbs up sign as he is taken off the field after being injured against the Buffalo Bills in the first half of an NFL football game Monday, Oct. 18, 2021, in Nashville, Tenn. (AP Photo/Mark Zaleski)

Lewan said Friday that he was knocked out before being carted off the field during a win over Buffalo on Oct. 18. He said he was told he was snoring and couldn't move briefly when he woke up.

“I’m super lucky it was just what it was,” Lewan said. “It was a really surreal experience. Definitely not one I enjoyed.”

Lewan was very aggressive to help his recovery, trying a bunch of “legal” things to help. He began feeling better three or four days in. He credited Titans coach Mike Vrabel and the rest of the franchise for understanding the challenges around concussions and taking them very cautiously.

“If I wasn't feeling like myself, I wouldn't be playing in this game,” said Lewan, the father of two young girls.

Tennessee (5-2) won't have seven-time Pro Bowl wide receiver Julio Jones, who will miss his third game with a hamstring injury. Jones started last week and caught two passes for 38 yards before leaving the Titans' win over the Chiefs.

The Titans also will be without fullback Khari Blasingame (knee).

They initially ruled running back Darrynton Evans out with a knee injury, then put him back on injured reserve soon after issuing an injury report Friday. That ends Evans' season under NFL rules. The third-round pick out of Appalachian State in 2020 just came off injured reserve and played his lone game of the season last week.

Evans has played in six games so far in his career because of injuries.