Titans look like AFC contender off wins over Bills, Chiefs 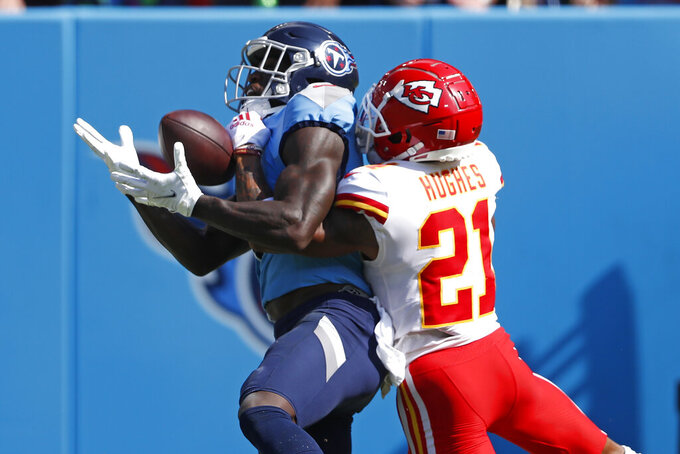 NASHVILLE, Tenn. (AP) — The Tennessee Titans are on quite a roll winning, three straight and five of their last six. Beating Buffalo and thumping the two-time defending AFC champ Kansas City could be a big ego boost.

Luckily, the Titans have a very humbling and recent reminder to stay focused on the next opponent and not what they hope happens in February.

Remember that if not for the Titans stumbling in New Jersey, the New York Jets would be one of the NFL's remaining winless teams.

How much that loss haunts Tennessee remains to be seen. For now, the defending AFC South champs look like contenders tied atop the AFC with Cincinnati, Baltimore and Las Vegas.

Tennessee also has the NFL's leading rusher in Derrick Henry, an offense averaging 32.6 points over the past three games, and a defense that s mothered Patrick Mahomes and the Kansas City Chiefs in a 27-3 rout. Even the kicking woes that plagued this team the past three seasons seem under control.

The Titans' biggest issue for years has been their ability to play up — and down — to the level of their competition.

Whether Tennessee winds up contending for one of the AFC's top seeds this season will be tested starting Sunday with a visit to AFC South rival Indianapolis (3-4). That's the first of seven teams currently with losing records remaining on Tennessee's schedule.

The Titans will get to prove how good they really are if they can stay focused on each week.

The defense. The Titans ranked among the NFL's worst in several defensive categories last season, including 30th in sacks. They sacked Mahomes four times and now rank 10th with 17 sacks. They also forced three turnovers and held the Chiefs without a touchdown for the first time with Mahomes at quarterback.

The Titans turned in the defensive performance with a revamped secondary. Injuries sidelined starting safety Amani Hooker, and cornerback Chris Jackson was scratched, with Kristian Fulton and Caleb Farley on injured reserve.

The rookie class. Farley as the top draft pick is out for the season with a torn ACL as one of three draft picks who've been on injured reserve. Second-round pick Dillon Radunz had 22 snaps against Kansas City for his most work this season. He filled in at both right and left guard spots due to injuries.

Cornerback Elijah Molden, the third-round pick, has started consecutive games due to injuries in the secondary. Safety Brady Breeze finally made his NFL debut against the Chiefs, contributing on special teams.

Harold Landry. The outside linebacker is second in the NFL with 7 1/2 sacks and had one of the Titans' four sacks of Mahomes for his fourth straight game with at least one sack. He's now 1 1/2 sacks off his career best of nine sacks set in 2019.

Radunz. The Titans had to play Bobby Hart, signed off Buffalo's practice squad last week, at left tackle for 42 snaps because of injuries. Radunz was the 53rd overall pick out of North Dakota State, and the Titans picked him to help fill their spot at right tackle. David Quessenberry won the job out of camp, and only injuries have gotten Radunz on the field on offense.

The Titans take one step forward, then it's back they go with injuries. Left guard Rodger Saffold returned after hurting his thigh. Left tackle Kendall Lamm, starting with Taylor Lewan out because of a concussion, hurt an ankle and didn’t return. Right guard Nate Davis also left the game.

869 — yards on the ground for Henry. He snapped a five-game streak of 100-yard rushing performances against Kansas City, yet he still leads the NFL and is 131 yards from 1,000 through seven games. He leads the next closest running back, Jonathan Taylor of the Colts, by 290 yards.

Start a two-game road trip Sunday in Indianapolis with the chance to take a big step toward repeating as division champs. Then the Titans will visit Los Angeles for a prime-time game, and the Rams (6-1) currently are the team with the best record remaining on Tennessee's schedule.