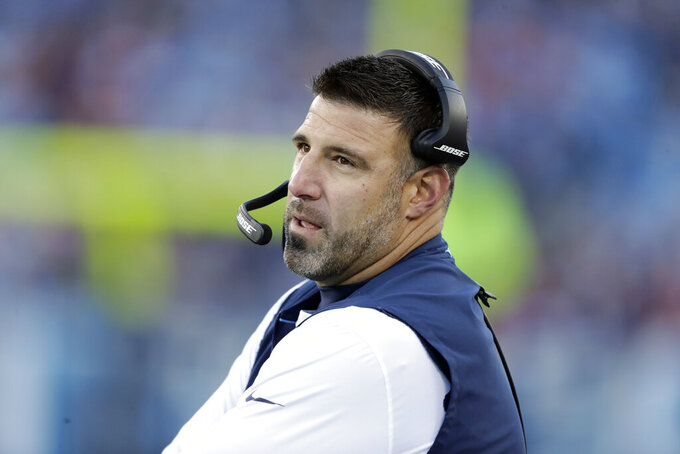 FILE - In this Dec. 22, 2018, file photo, Tennessee Titans head coach Mike Vrabel watches from the sideline during the first half of an NFL football game against the Washington Redskins in Nashville, Tenn. The Tennessee Titans wrapped up their three-day mandatory minicamp not on a football field but with a field trip to hit golf balls. Vrabel says the trip was the result of evaluating where the Titans are at the end of their offseason program and a last attempt to keep everyone healthy for training camp. (AP Photo/James Kenney, File)

NASHVILLE, Tenn. (AP) — The Tennessee Titans wrapped up their three-day mandatory minicamp not on a football field but with a field trip to hit golf balls.

Their last football play? Dean Pees caught a ball punted off a Jugs machine before being swarmed by Titans defenders celebrating with the 69-year-old coordinator on Wednesday.

Coach Mike Vrabel says Thursday's trip to Topgolf was the result of evaluating where the Titans are at the end of their offseason program and a last attempt to keep everyone healthy for training camp.

"I don't think we're going to beat anybody on this last day, but I think that we could certainly lose to some teams by losing guys," Vrabel said Thursday. "I think that's the biggest thing that you want as you come out of spring. You're just trying to improve but stay as healthy as you possibly can."

Vrabel said there's a fine line of preaching effort and finishing with players competing for jobs without pushing too hard, especially with coaches such as himself telling them to keep competing and finishing plays.

Titans' rookies and quarterbacks will report for training camp July 22 with the rest of the team arriving July 25, and Vrabel expects to be close to full strength then.

Players such as rookie defensive lineman Jeffery Simmons, their top draft pick, likely will be among a few Titans starting on the physically unable to perform list. Simmons is recovering after tearing his left ACL in February preparing for the draft.

For Vrabel, this wraps up his second straight offseason program. His mantra to the Titans for this season has been finding ways to go from good to great after three consecutive 9-7 seasons and only one playoff berth. How successful their offseason work was will only be seen once the season kicks off Sept. 8 at Cleveland.

"That's something that has to be evaluated ultimately by wins and losses," Vrabel said. "That's really what this comes down to."

Vrabel already has endured a debut season that featured the NFL's longest game in the opener, injuries to a handful of key starters including quarterback Marcus Mariota, a veteran receiver asking to be released midseason and his defensive coordinator missing a key divisional road game due to illness. So the coach already is expecting a season filled with challenges.

Some questions will only be decided in training camp such as who will start at right guard after the Titans released Josh Kline in March. Vrabel joked that one position already is settled with Pees beating out offensive coordinator Arthur Smith, a former offensive lineman, catching punts Wednesday to wrap up minicamp.

"Dean is our new punt returner," Vrabel said. "Everybody wants to know, we've got one position filled for 2019 and that's Dean Pees at punt returner. Obviously, Dean has caught a few punts in his day. He tried to keep his shoulders square, get his fingertips together. It was impressive. Arthur, not so much. That's what it looks like when offensive linemen try to catch punts."

Notes: The Titans swapped tight ends on the roster Thursday, agreeing to terms with veteran Ryan Hewitt and waiving Keith Towbridge. Hewitt has played 72 games in five seasons with 23 catches for 221 yards. Undrafted out of Stanford, he played four seasons with Cincinnati and was with Indianapolis for 12 games last season.