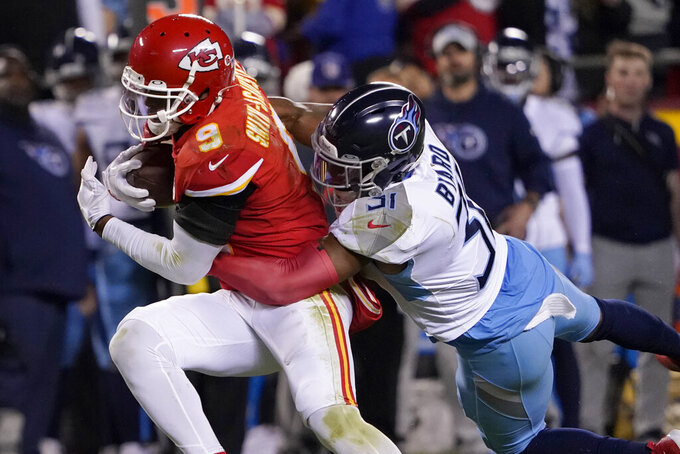 The reigning MVP quarterback hopes his Green Bay Packers can dig themselves out of an even bigger hole than Tennessee.

First, the Packers must find a way to cool off those AFC South-leading Titans at Lambeau Field on Thursday night.

“They lost their first two games, and I think just like happens in this league, there’s probably overreactions and what the hell’s going on and what are we going to do,” Rodgers said. “And I think they rattled off like five or six wins in a row and kind of quieted everybody up.”

The Titans (6-3) bounced back from that 0-2 start by winning six of their next seven, including five in a row. Derrick Henry has rushed for 923 yards, 8 behind NFL leader Saquon Barkley of the New York Giants.

Green Bay (4-6) had lost five straight — its longest skid since 2008 — before rallying from a 14-point, fourth-quarter deficit to beat the Dallas Cowboys 31-28 in overtime on Sunday.

Aaron Jones and A.J. Dillon combined to run for 203 yards of the Packers' 207-yard total. The Packers are winning when running instead of leaning as much on Rodgers' arm.

That’s caught the attention of the Titans, who have the NFL’s second-ranked run defense.

“The biggest thing for us going to this game is going to be our rush defense versus their rush offense,” Titans safety Kevin Byard said. “Three out of four of their wins, they ran for over 200 yards and I feel like their best skill players are in the backfield. A.J. Dillon and Aaron Jones are two top players in this league, so we’re going to have to stop them.”

Each team has a wide receiver coming off a breakthrough performance.

Packers rookie Christian Watson had four catches for 107 yards and three touchdowns against the Cowboys. The second-round pick from North Dakota State had 10 catches for 88 yards all season before that game.

Not only are the Titans second in the NFL in defending the run, they also have the NFL’s best third down defense.

Opponents are converting just 27.9% of their third down opportunities. Tennessee also is coming off a six-sack performance for a league-high 16 over its past four games.

They’re also getting healthier even with safety Amani Hooker ruled out for a third straight game.

Defensive lineman Jeffery Simmons, a 2021 Pro Bowler, sat out the win over Denver resting a sprained left ankle and hopes to play Thursday night. Cornerback Elijah Molden, who left the previous game with an injured groin in his season debut, is questionable.

Titans kicker Randy Bullock apparently hurt his right calf in pregame warmups and still kicked two extra points and a field goal against Denver. The Titans signed veteran Josh Lambo to the practice squad Tuesday as an insurance policy, then added him to the active roster Wednesday with Bullock ruled out.

Lambo last kicked in the NFL last season with Jacksonville, making five of seven extra points and missing all three field goals he attempted. Tennessee used rookie punter Ryan Stonehouse to kick off in the second half last week.

For the Packers, Mason Crosby has been dealing with a back issue, though he still made a game-winning 28-yard field goal in overtime Sunday. Ramiz Ahmed handled kickoffs in Crosby’s place on Thursday.

The previous time the Titans visited Lambeau Field, the Packers romped 40-14 in the snow.

While it snowed Tuesday in Green Bay, it’s supposed to be clear Thursday night. The forecast calls for a high temperature of 31 degrees and a low of 24.

That could make this the coldest pre-December game the Titans have played going back to 1999, when the franchise formerly known as the Houston Oilers became the Titans. The kickoff temperature was 25 degrees when the Titans hosted the Pittsburgh Steelers on Nov. 17, 2014.

The Packers released wide receiver/punt returner Amari Rodgers on Tuesday, two days after his fumble led to a Cowboys touchdown. Rodgers had fumbled five times this season and lost two of them.