Tom Brady is back, but he's hardly the only story for Bucs 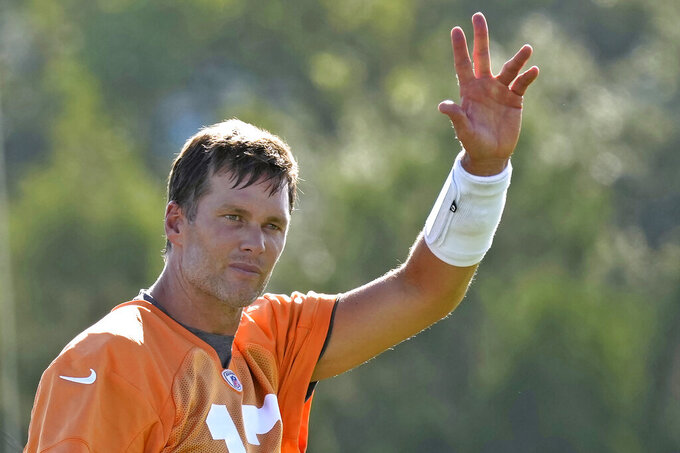 TAMPA, Fla. (AP) — Tom Brady is back for a 23rd season, his third with the Tampa Bay Buccaneers.

But that’s hardly the only major storyline for the defending NFC South champions as they begin training camp.

Todd Bowles is starting his second stint as a NFL head coach and the Bucs are stockpiling high-profile offensive talent to help Brady pursue an eighth Super Bowl title — as evidenced by the signing Wednesday of seven-time Pro Bowl receiver Julio Jones.

Brady, who turns 45 soon, led the NFL in passing yards and touchdowns last season and cited “unfinished business” as one of the reasons he decided to end the brief retirement he announced in February.

The Bucs did have another retirement to contend with: tight end Rob Gronkowski, who announced he was stepping away — again — in June. They signed veteran Kyle Rudolph as his replacement.

“We’ve got to replace Gronk’s catches. We’ve got an extra weapon, especially in the red zone and out in the field, and we’re going to put him to use,” Bowles said of Jones. “It gives us a chance to be more creative in some of the things we do. We’re happy to have him.”

Jones played 10 seasons for the NFC South rival Atlanta Falcons before injuries sidelined him for seven games two seasons ago and contributed to the worst statistics of his career with the Tennessee Titans last season (31 receptions for 434 yards and one touchdown in 10 games).

“I’m looking forward. I’m not looking backward,” Jones said. “It’s a great opportunity for me to be a part of something special. ... Just looking forward to getting to work.”

The Bucs topped Jones’ wish list for potential destinations: A chance to play with Brady and pursue a Super Bowl ring simply was too good to pass up.

“It’s a surreal moment. It’s amazing. I’m ready to go," Jones said. "At the end of the day, it’s all about accountability. I have to be accountable for him, the team and everybody.”

Jones is now part of an already dynamic group of playmakers, including receivers Mike Evans, Russell Gage and Chris Godwin, who’s recovering from surgery to repair the anterior cruciate ligament and medial collateral ligament in his right knee.

“When all is said and done, I’ve still got to come to work. I still have to put the work in,” Jones said. “You can see Julio is with the Bucs, and we’ve got Mike (Evans), we’ve got Tom (Brady), but we’ve all got to put the work in. Nobody is going to give us anything.”

Bowles is the one who'll be responsible for a cohesive team. He succeeds Bruce Arians, who announced his retirement in March shortly after Brady ended his six-week retirement.

The 58-year-old who played eight seasons in the NFL joked Wednesday that “we might be here for 24 hours” if he tried to detail the difference between taking over the Bucs now as opposed to the Jets seven years ago.

“When you’re a first-time head coach, no matter what they tell you, there are some things that are going to happen that you’re going to have to deal with that you’re not sure about making decisions that you have to make them on,” Bowles said after practice.

“Having seen everything, understanding my strengths, my weaknesses, understanding everyone around me — it’s different because I’ve been here for three years,” Bowles added. “I didn’t have to build a staff and get acclimated to the building or anything else like that. So that part, from a camaraderie standpoint, that’s been great. It really feels like it hasn’t changed for me.”