Too many mistakes for short-handed Chargers in loss to Lions 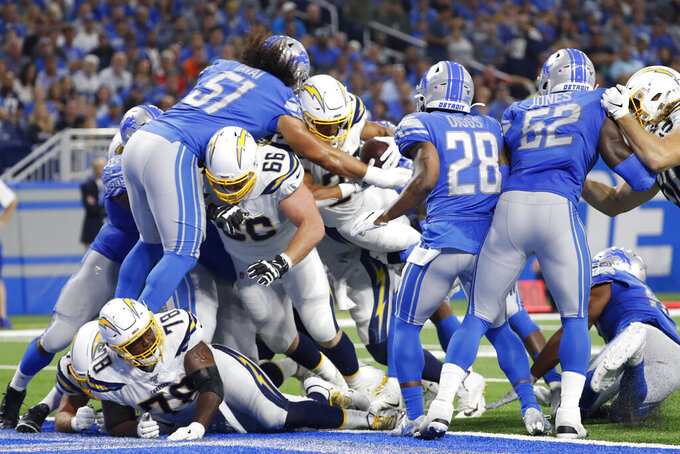 DETROIT (AP) — Philip Rivers rattled off a lengthy list of problems for the Los Angeles Chargers, trying to avoid using his team's health issues as an excuse.

"Nothing we did out there today, from the fumbles, the interceptions, to the two touchdowns called back, to a couple third-and-shorts we didn't convert — that had nothing to do with injuries," Rivers said. "That's all self-inflicted."

Rivers left out one important area — a struggling kicking game — but he was right that the short-handed Chargers had plenty of chances to pull away from Detroit on Sunday.

Instead, they let the Lions stay in the game until the fourth quarter, when Detroit took the lead and won 13-10.

Los Angeles is without safety Derwin James (foot), tight end Hunter Henry (knee) and cornerback Trevor Williams (quad), and on Sunday, the Chargers were also missing kicker Michael Badgley (groin). Ty Long, the punter, made a 39-yard field goal at the end of the first half, but he also missed from 39 and 41 yards in the second half.

But the Lions made mistakes of their own. Kicker Matt Prater missed a field goal and an extra point, and Matthew Stafford threw two interceptions. Rivers and the Chargers led 10-6 in the third quarter and appeared poised to increase their advantage.

Justin Jackson broke free for a 60-yard touchdown run, but that was called back for holding toward the end of the play. Then Rivers threw a 22-yard touchdown pass to Austin Ekeler, only to have that brought back for an illegal block.

It still appeared Los Angeles would reach the end zone. The Chargers had first-and-goal from the 1 — but Ekeler fumbled trying to leap toward the goal line. He'd scored in similar fashion earlier in the game.

The Lions recovered the fumble, and the Chargers never did score again. After falling behind, they drove into field goal range, but on third-and-19 from the Detroit 28, Rivers threw deep into coverage for Keenan Allen and was intercepted by Darius Slay with 1:03 remaining.

"We were just trying to make a play at the end of the game, probably was too aggressive," Allen said. "If we could do it again, probably drop it off short and go for a field goal."

Rivers said no matter how the play looked, he didn't think it was any kind of desperation throw.

"Slay's back was turned to me, so I thought, Keenan maybe, interference maybe, or incomplete and let's go kick it," Rivers said. "I certainly didn't think interception or I wouldn't have thrown it."

It was a frustrating ending for Los Angeles on a day the Chargers rolled up 424 yards.

"We can't fumble the ball on the 1-yard line, we can't have two touchdowns called back with penalties, we've got to make our damn kicks," Lynn said.