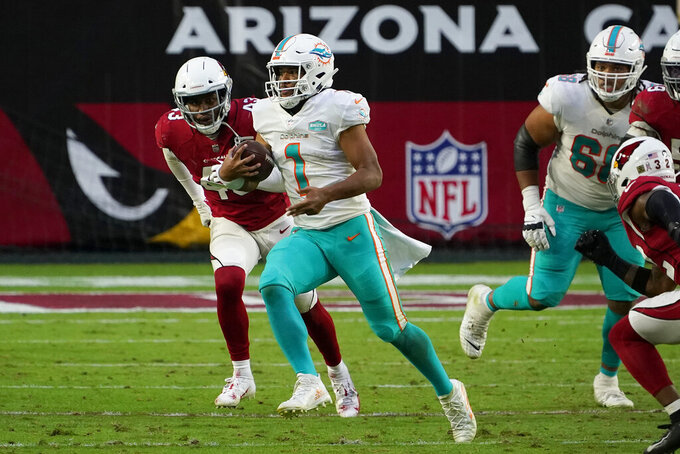 MIAMI (AP) — The Miami Dolphins delayed returning home from their latest victory because of a tropical storm in South Florida, and at the moment, bad weather seems the only thing that can slow them down.

Coach Brian Flores' team finally flew back Monday from Phoenix still basking in a 34-31 victory over Arizona and a four-game winning streak, the Dolphins' longest since 2016. They improved to 5-3, which matched their best record at the halfway point in a season since 2001.

And in the Tua Tagovailoa era, the Dolphins remain unbeaten. The rookie quarterback has won his first two career starts and made a big leap forward against the Cardinals, showing the accuracy, mobility and poise that made him such a sensation at Alabama.

“He played well,” Flores said Monday. “He led the way in the fourth quarter, and made some plays throwing it and running it.”

After besting Arizona's Kyler Murray with a late comeback, Tagovailoa faces another matchup of young guns Sunday when the Dolphins play host to Justin Herbert and the Los Angeles Chargers.

The showdown marks the start of an inviting four-game stretch against opponents who were a combined 7-24-1 through Sunday, which should allow the Dolphins to strengthen their case for the franchise's first playoff berth since 2016.

“We still have a long way to go,” Flores said. “We have to make a lot of improvement the second half of the season.”

The Dolphins drew special satisfaction from Sunday's narrow win because it was their first this year. Previous victories were by a combined score of 126-47, and the Dolphins are still annoyed about losing close games the first two weeks of the season.

They faced a deficit for the first time in more than a month before Tagovailoa led a 93-yard drive in the fourth quarter for a 31-31 tie. Jason Sanders’ 50-yard field goal with 3½ minutes left provided the winning margin — and the sort of boost that accelerates Miami's rebuilding project in Year 2 under Flores.

“Early in the season we couldn’t finish in the fourth quarter,” center Ted Karras said. “To have a fourth-quarter battle and win it and feel how it is to win those kind of games is really important going forward.”

The Dolphins have made huge strides since Flores took over, but he has yet to get the ground game going. Last year it was so bad that the Dolphins' leading rusher was 37-year-old quarterback Ryan Fitzpatrick, and this season they again rank last in the NFL in yards per carry at 3.6.

A line that has started three rookies has been unable to create holes with any frequency, and the options at running back are such that 2019 seventh-round pick Myles Gaskin became the starter before he was sidelined by a knee injury.

It’s increasingly clear the Dolphins have finally found keepers at the two most important positions — head coach and quarterback.

Tagovailoa’s performance Sunday suggested the coach’s timing was right in making the widely scrutinized switch at quarterback from Fitzpatrick. Flores kept the rookie mostly under wraps in his first start, but Tagovailoa matched Murray highlight for highlight, and finished with 248 yards passing and 35 rushing.

On defense, Flores integrated five new starters into a unit low on star power but high on collective effort and enthusiasm.

“When we make good plays, obviously we’re going to celebrate and high-five and slap hands,” cornerback Byron Jones said. "The beauty of football is really bringing your own juice and then having that energy like you’re 7 years old in the backyard. So we’ll just keep it rolling and keep having some fun.”

Veteran newcomers Jordan Howard and Matt Breida have failed to provide an upgrade at running back, combining for 65 carries for 161 yards, a 2.5 average. First-round draft pick Noah Igbinoghene struggled early at cornerback and has played little in recent weeks.

The Dolphins have remained relatively healthy, but the toll on offense is beginning to mount. Receiver Preston Williams left Sunday’s game because of a foot injury, and Flores said his status would be determined day by day. Tight end Durham Smythe was evaluated for a concussion.

Plus-61 — The Dolphins’ point differential is fifth in the NFL, and a measurement of their improvement in the past 12 months. At midseason in 2019 they were minus-153.

After facing the Chargers, the Dolphins play the Broncos, Jets and Bengals, and all four teams are under .500. Then comes a daunting finishing stretch against the Chiefs, Patriots, Raiders and Bills, who were a combined 22-11 through Sunday.