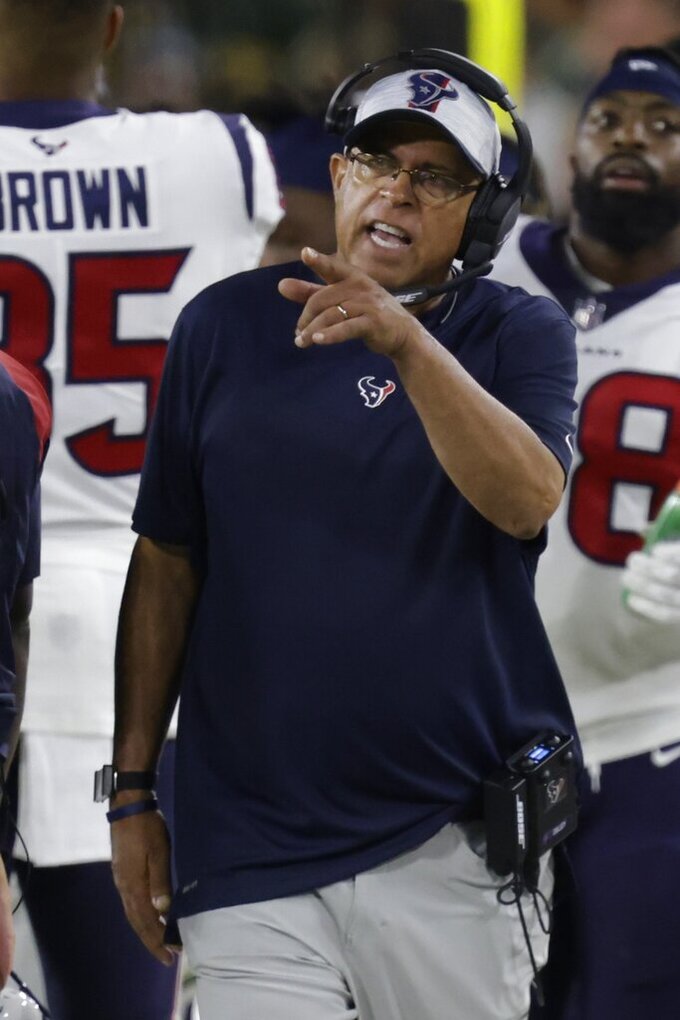 HOUSTON (AP) — Though Jacksonville’s Urban Meyer and Houston’s David Culley are both making their debuts as NFL head coaches Sunday when the Jaguars and Texans meet, that’s the only possible way you could think of them as rookies.

The two men, who are involved in one of the two Week 1 matchups of new coaches — Philadelphia at Atlanta is the other — have more than 75 years combined of college and NFL coaching experience as they begin these jobs. They’ve both been coaching so long that the only time they coached on opposing sidelines was more than 30 years ago.

On Sept. 22, 1990 Meyer was the receivers coach at Colorado State when the Rams faced UTEP, where Culley was the offensive coordinator.

Culley didn’t remember that game and asked who won. Told that Meyer and Colorado State got a 38-20 victory, Culley smiled.

Meyer, who led his teams to three national titles, has a 187-32 record as a college head coach and has won 17 consecutive openers.

His Jaguars are 2 1-2-point favorites against the Texans, according to FanDuel SportsBook. Meyer was asked how important winning the opener will be for the team to have a successful year after going 1-15 last season.

“It’s just a little different... you can’t lose a game in college,” he said. “Professional football, reality is reality. But yeah, heck yeah, this is a tone-setter, this is a setter for everything.”

Jacksonville looks to begin its turnaround behind quarterback Trevor Lawrence, the top overall pick in this year’s draft, who led Clemson to a national championship in 2018.

Lawrence, the first rookie quarterback to start an opener in franchise history, admitted that he’ll have some butterflies Sunday. But the 21-year-old Lawrence has a plan he believes will help quell those nerves.

“This won’t change every week, but just do what I do, don’t try to do too much,” he said. “That’s the thing, I have great players around me, just trusting those guys, trusting ... everybody to put me in a good position.”

Houston also has a new quarterback this season with veteran Tyrod Taylor scheduled to start in place of Deshaun Watson. Taylor gets the nod with Watson’s future with the team uncertain after 22 women filed lawsuits alleging sexual assault or harassment after he requested a trade.

Taylor gets another shot to start after starting only one game for the Chargers last season before being sidelined when a team doctor accidentally punctured his lung when giving a painkilling injection for a rib injury. By the time he recovered he had lost his starting job to Justin Herbert.

“Everything that has happened in my career up to this point has prepared me for this moment,” Taylor said. “I’m having fun, playing with a peace of mind and just looking forward to going out and making plays and helping our team win.”

Don’t expect Lawrence to have many, if any, designed runs. The Jaguars want to protect their franchise quarterback by keeping him out of harm’s way.

“Lamar Jackson can go out there and run the zone read 10 or 12 times a game and be successful, but I’m not really that type of guy,” Lawrence said. “Definitely that’s something that we have the ability to do, but, no, I’m not really lobbying for that.”

Lawrence ran for 943 yards and 18 touchdowns in three years at Clemson.

“I think I’m faster than I look, for sure, but I’m not going to blow anyone’s socks off with my speed,” he said. “I can definitely move when I need to. … You have to be able to use your legs.”

The Texans will have a new kicker Sunday after Kaʻimi Fairbairn, the team’s placekicker for the last four seasons, was placed on the injured reserve Wednesday with a leg injury. Culley said he wasn’t yet sure who would fill in for him, but with no other kickers on the roster, the job will likely go to Joey Slye, who was signed to the practice squad Tuesday and could be promoted to the active roster for the game.

“There’s always a chance,” he said with a smile.

Meyer wants to have the best special teams units in the NFL this season. It’s something the longtime college coach feels passionate about and believes can make a huge difference in close games.

So he signed 2017 All-Pro returner Jamal Agnew in free agency along with safety Rudy Ford, whom Meyer calls the best gunner he’s ever seen. He also set the 53-man roster with an eye on special teams, even trading two potential starters – linebacker Joe Schobert and cornerback Sidney Jones – partly because they lacked special teams prowess.

Throw in Josh Lambo, the NFL’s most accurate kicker over the past four seasons, and one of the league’s top punters in Logan Cooke, and Meyer thinks Jacksonville has something, well, special in store.

“It wasn’t very good for a minute and (then) they worked their tails off,” Meyer said.

By Dan Greenspan 23 minutes ago
By Maryclaire Dale an hour ago
By W.g. Ramirez 2 hrs ago
By Michael Marot 3 hrs ago
4 hrs ago