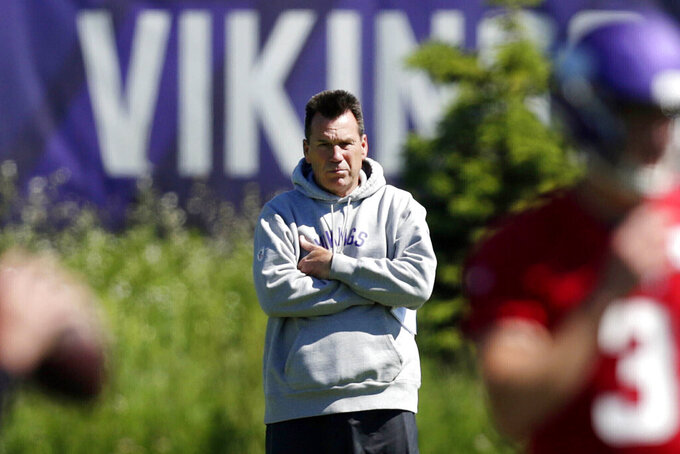 FILE - In this June 13, 2019, file photo, Minnesota Vikings assistant head coach and offensive advisor Gary Kubiak watches quarterbacks during drills at the team's NFL football training facility in Eagan, Minn. As coach Mike Zimmer prepares for his eighth season with the Minnesota Vikings, he might need to hire yet another offensive coordinator with Gary Kubiak uncertain to return. (AP Photo/Andy Clayton- King, File)

MINNEAPOLIS (AP) — Minnesota Vikings offensive coordinator Gary Kubiak has retired after a 36-year career as a player, coach and adviser in the NFL, the team announced Thursday.

The decision, though widely expected, will force head coach Mike Zimmer to hire a sixth offensive coordinator in six seasons.

Kubiak, who took over the role in 2020 and followed Kevin Stefanski, John DeFilippo, Pat Shurmur and Norv Turner under Zimmer, steered Minnesota's most productive offense in more than a decade. The Vikings ranked fourth in the league in total yards and tied for sixth in offensive touchdowns.

“I’ll miss the competition, the planning, game days and being part of a team. But, more than anything, I’ll cherish the friendships I’ve made along the way with players, coaches and staff," Kubiak said in a statement distributed by the Vikings. "I love the game of football and will forever be its biggest fan.”

The 59-year-old Kubiak joined the Vikings in 2018 as an offensive adviser. Zimmer asked him to become the primary play-caller when Stefanski was hired as Cleveland's head coach.

Kubiak participated in seven Super Bowls as a player or coach, winning four titles. His most recent ring came after the 2015 season as the head coach for Denver, the team he played nine years for as a backup quarterback. He stepped down from that post after two seasons for health reasons, which also ended an eight-year run as head coach in his native Houston.

Texans defensive end J.J. Watt tweeted his admiration and congratulations, calling Kubiak the quintessential players' coach “who knew how to grind when it was time to grind and when to have a beer with you when it was time for a beer.”

Kubiak spent a total of 24 seasons with the Broncos.

“Few people have impacted one team in more ways than Gary," team president and CEO Joe Ellis said in a statement. “Gary will always have a special place in our championship history."

NFL rules require the Vikings to interview at least one external minority candidate for the vacancy. Kubiak's son, Klint Kubiak, is currently the quarterbacks coach and expected to receive strong consideration for the job to satisfy Zimmer's desire to maintain continuity on that side of the ball.

“Gary did a tremendous job with us at the Vikings over the past two seasons. I have a great deal of respect for him as a coach and as a person, and I’m glad I was able to coach with him. He has had one heck of an NFL career as a player, assistant coach and head coach, and I am really happy for Gary and his wife Rhonda as they head off to their ranch,” Zimmer said in a statement. “We will all miss Gary at the Vikings organization and wish him the very best.”