Vinatieri looking to rebound after missing 3 kicks in opener 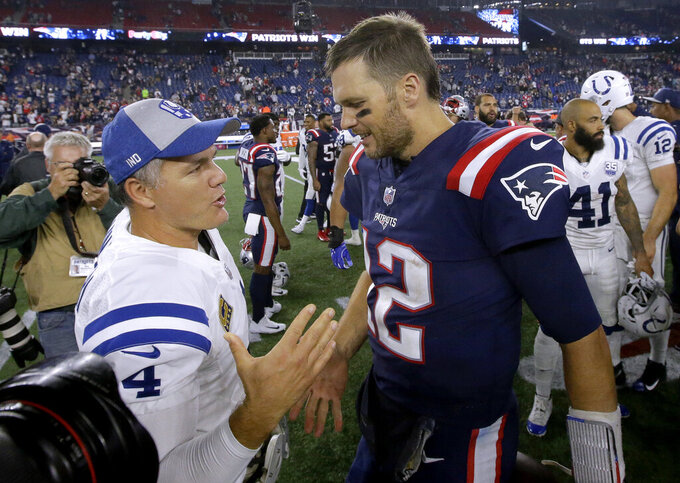 FILE - In this Oct. 4, 2018, file photo, Indianapolis Colts kicker Adam Vinatieri, left, and New England Patriots quarterback Tom Brady speak at midfield after an NFL football game in Foxborough, Mass. The NFL isn’t exclusively for the young. From fortysomethings such as Tom Brady and Adam Vinatieri to those nearing a fourth decade from Eli Manning, Philip Rivers and Terrell Suggs, there’s still a place for the aged in football. (AP Photo/Steven Senne, File)

Then the NFL's career scoring leader inexplicably missed three kicks, and the 24-year veteran long dubbed the best clutch kicker in league history started fielding questions about what went wrong in the Colts' overtime loss. On Thursday, the questions were back.

"Unfortunately, if you play long enough you're going to have a lousy game every once and a while," Vinatieri said. "One day you're off, and you come back and figure out how to kick 'em straighter."

Sounds like a simple solution to, perhaps, the worst game of his career.

But those bad days have been rare for the NFL's career scoring leader. Never before had Vinatieri missed two field goals and an extra point in the same game — two to the left, one to the right — and it marked only the fourth time in his career he missed a field goal inside 30 yards.

"I just didn't kick well," he said. "There were a few things that didn't go our way but the majority of them were my lousy kicking, so I totally let them down."

It didn't take long for others to start contemplating whether father time had finally caught up to Vinatieri, the league's oldest player now at age 46.

He sat out part of the preseason with tendinitis in his left knee. He finished last season by missing two extra points and a field goal in the Colts' final three games after contending with a lingering groin injury. Then came the performance nobody saw coming on a bright, sunny southern California day.

"He was the same old, Adam," Rhodes said. "We had great warmups and stuff, he was extremely confident. But he's done it so long, I know he'll jump right back."

If stats are any indication, Rhodes could be right.

Vinatieri's field-goal percentages have hovered in the 80s or 90s for seven straight years and he's produced eight of his 12 best single seasons since 2010. He's missed just 19 extra points in the NFL, nine coming since the league voted to move line of scrimmage for the attempt from the 2-yard line to the 15.

Here, in this locker room, everybody roots for Vinatieri.

"He's a great guy, his mindset is the same as mine," 24-year-old All-Pro linebacker Darius Leonard said. "He loves the game, he loves being in this locker room, and you can tell. He doesn't just go to meetings and things, he's in here with us."

Vinatieri couldn't bring down Desmond Howard or Devin Hester on their kickoff returns for touchdowns in the Super Bowl. Vinatieri finished the 2009 season on injured reserve after having surgery on his right knee, When the Patriots let him walk away in free agency following the 2005 season, he landed in Indianapolis' domed-stadium where he's now scored a franchise record 1,446 points and became the first player in league history to top 1,000 points with two teams.

There was even that time, a month into his rookie season, when Vinatieri needed to make a 40-yard field goal in the wind and rain against Jacksonville to keep his job.

He made it look as easy then, as coach Frank Reich expects this weekend at Tennessee (1-0), without Vinatieri's personal stakes being so high.

"I have watched him in pregame, I have seen him every day in practice. (I have) no concerns that there is any deteriorating of anything physically, and certainly not mentally," Reich said Monday. "This guy is the toughest mental athlete I have ever been around."

"I think every single day, every person is playing for their job," Vinatieri said.