Wentz leads key trio of Colts back onto practice field 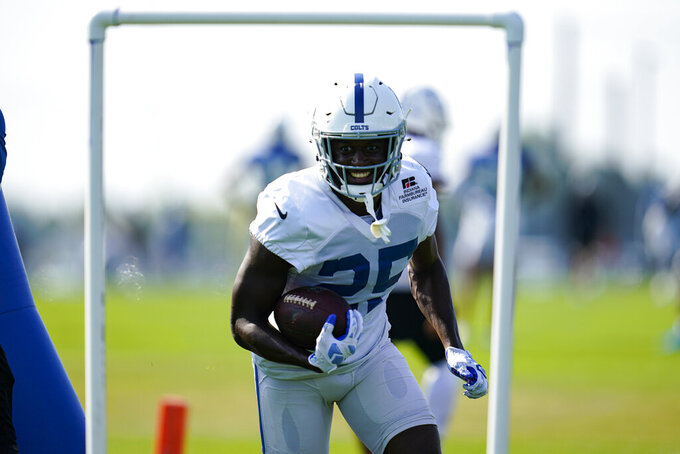 WESTFIELD, Ind. (AP) — Carson Wentz got back to work with the Indianapolis Colts on Monday — and looked sharp.

Three-time All-Pro guard Quenton Nelson and center Ryan Kelly joined him at practice for the first time since late July.

Yes, all three starters returned from injuries, finally giving the Colts a glimpse of what they might look like at full strength. Wentz and Nelson hadn't worked out since having surgery in early August to remove bone fragments from their feet. Kelly had been out with a hyperextended left elbow. All three are expected to do limited work this week.

“It was a lot of fun, honestly," said Wentz, the new starting quarterback acquired from Philadelphia in a March trade. “I don’t like watching practice, I’d much rather be doing it and it was fun. It was fun to get out there today and to not think about it a lot and just play ball. I came out of it very confident."

Colts coach Frank Reich and receiver Zach Pascal liked what they saw from Wentz, too, acknowledging he appeared to be in sync with his teammates despite missing three weeks.

It's a promising sign after watching second-year quarterback Jacob Eason and rookie Sam Ehlinger, a sixth-round pick, split most of the first-team snaps in Wentz's absence. While both showed promise, each also has struggled at times — perhaps something to be expected given neither had thrown against an opposing NFL defense until Aug. 12. Veteran quarterback Brett Hundley has been third on the depth chart.

But Wentz's return three weeks after surgery and a week sooner than Reich anticipated might be the most promising indication Indy's offense could have the entire trio ready for the Sept. 12 season opener against Seattle.

All three spent last week rehabbing behind the scenes but now must demonstrate they can complete practices on successive days. Each, Reich said, also will be monitored closely between workouts. Nelson has never missed a start in his first three seasons and has told teammates and coaches he doesn't intend to start now.

The bigger question is Wentz, who has a long injury history and has been told by team officials not to rush the recovery.

Still, having the trio back at practice was a welcome sight for Reich, who missed the first week of training camp after testing positive for COVID-19.

Reich’s team has been dealing with injuries ever since.

On his first day back, he announced Wentz would miss five to 12 weeks with surgery. The next day he announced Nelson had the same prognosis with the same injury. All-Pro linebacker Darius Leonard also missed the first two weeks of camp while recovering from ankle surgery in June.

So Monday was the first time Indy was near full strength since reporting to Westfield, Indiana, on July 27. Camp wraps up Wednesday before the final preseason game Friday at Detroit.

“We were in stretch and I see these guys in stretch and a couple other guys healthy and I’m like, ‘It looks like we have a squad out here. I think we’re going to be all right,’” Reich said.

Wentz thinks he will be, too.

“Unfortunately, I’ve been here before with limited reps and had to go play," he said. “It wasn’t one of those injuries where you go rehab and you’re away for a while. I’ve been involved in all the meetings and everything except for really one day. I still feel confident with that timeline and everything.”