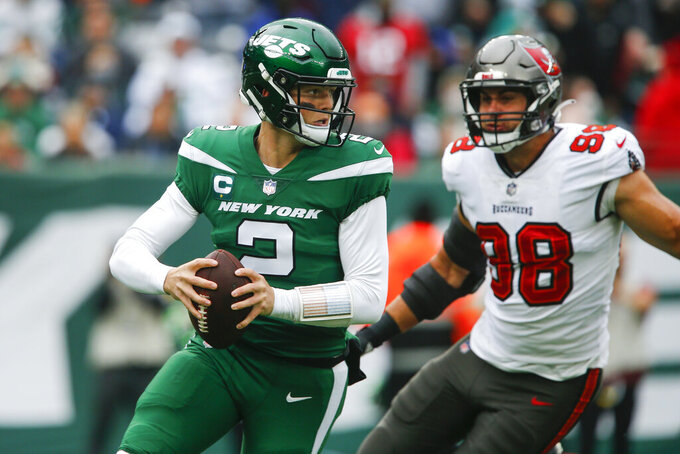 FILE - New York Jets quarterback Zach Wilson, left, looks to throw during the first half of an NFL football game against the Tampa Bay Buccaneers, Sunday, Jan. 2, 2022, in East Rutherford, N.J. There was something different about Zach Wilson when the second-year quarterback arrived at the New York Jets' facility last week. His teammates could sense the increased confidence — and they liked everything about it. “My guy came back with a little more swag,” offensive tackle George Fant said of Wilson on Wednesday, April 27, 2022.(AP Photo/John Munson, File)

NEW YORK (AP) — There was something different about Zach Wilson when the second-year quarterback arrived at the New York Jets' facility last week.

His teammates could sense increased confidence — and they liked everything about it.

“My guy came back with a little more swag,” offensive tackle George Fant said of Wilson on Wednesday. “He's ready to go, man.”

The immediate focus is on the NFL draft, which kicks off Thursday night with the Jets holding the fourth and 10th overall picks. New York will have four of the first 38 selections in a draft that's crucial for the franchise and general manager Joe Douglas, with all intentions on the Jets competing for a playoff spot this season — and snapping the league's longest active drought at 11 years.

But to get there, New York needs Wilson to show marked improvement and show why he was the No. 2 overall pick a year ago.

“For me, it’s just how efficient can I be?” Wilson said during a Zoom call. "How can I get the ball out of my hands quickly? How can I help out our O-line with my pocket presence, my ability to step up and get the ball out of my hands to our running backs, go down the field to our receivers and let those guys make plays? How can I just be confident within the pocket, be accurate?

“I think everything takes care of itself once everyone starts doing their own job — I think it’s perfect.”

Wilson had a down-and-up rookie season that started with some major struggles, followed by a knee injury that sidelined him for four games and capped by him not throwing an interception in his last five games. The overall numbers weren't eye-popping — 2,334 yards, nine touchdowns, 11 INTs, a 55.6 completion percentage — but his cutting down on mistakes down the stretch was a sign of optimism.

“I 100% see greatness,” Douglas said on ESPN NY's ”The Michael Kay Show" last Friday. “I see a young quarterback that really went through the ringer to start the year. And what was most encouraging about Zach was when he came back, he maybe had one turnover over the last six games. He was taking care of the football. He was playing within the scheme."

The game clearly slowed for Wilson, and he needs to keep it that way.

He'll have a full offseason with offensive coordinator Mike LaFleur's playbook, and Wilson has regularly watched film of the good and, more importantly, bad plays from last season. Wilson also spent a chunk of the offseason working out in a few locations with various teammates — including wide receivers Elijah Moore, Corey Davis. Denzel Mims and Braxton Berrios — to continue building a rapport.

“I think that stuff kind of goes a long way,” Wilson said. “These receivers, they want to be great. My job is to let them be great and to get the ball into their hands.”

Wilson continued to work with John Beck, his personal quarterbacks coach who spent time on the Jets' staff late last season. Wilson also threw to BYU players while he was home in Utah, using that time to work on passing to receivers running live routes.

Meanwhile, Douglas was busy this offseason adding playmakers around Wilson by signing the likes of tight ends C.J. Uzomah and Tyler Conklin, and guard Laken Tomlinson. New York was aggressive in trying to trade for Tyreek Hill, and has been mentioned as a potential trade partner for San Francisco's do-it-all dynamo Deebo Samuel.

Wide receivers are also likely to be on the Jets' wish list early in the draft — perhaps as early as the No. 10 pick.

“I’m extremely excited about the plan,” Wilson said. “I feel like the organization as a whole, everybody is very tied together as far as being on the same page with everything. I know my trust with the ownership and Joe D. as well and what they’re doing, I feel like they have a really good plan.”

And the ultimate success of that plan starts with Wilson.

“He's doing everything he should be doing,” Fant said. “Definitely happy to see him back in the building. Excited for him this next season coming up. So yeah, he definitely came back with a little something different.”

NOTES: Fant said he had a knee scoped during the offseason and is currently rehabilitating, but expects to be fully healthy by training camp. He also said his agents and the Jets have talked about a contract extension, and he wants to play the rest of his career with the Jets. ... Wilson on the possibility of the Jets acquiring Samuel: “Obviously, Deebo is a great player. There’s definitely no hesitation there.”