Winless Lions go into bye with fans staying away from games 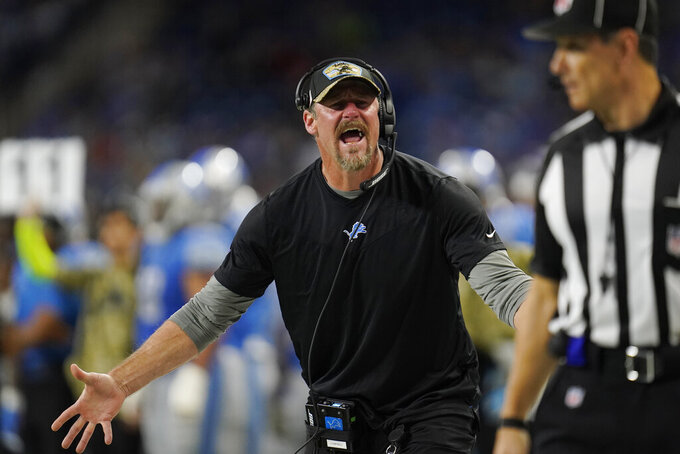 Detroit Lions head coach Dan Campbell argues a call during the first half of an NFL football game against the Philadelphia Eagles, Sunday, Oct. 31, 2021, in Detroit. (AP Photo/Paul Sancya)

DETROIT (AP) — The Detroit Lions have a lot of long-suffering fans and they're starting to show their displeasure by simply not showing up for games to watch the NFL's only winless team at Ford Field.

“When you don’t win a game and you’re 0-8 and you’ve lost at home, I’m not going to be upset with that," Campbell said Monday. “I understand and my job is to try to find a way to help us win so that they want to come watch a winning product."

The Lions announced a crowd of 47,192 on Sunday, when they were thoroughly dominated by the Philadelphia Eagles 44-6. It was clear that a lot of people with tickets chose not to use their tickets or could not get rid of them because there were many rows throughout the stadium with unoccupied seats.

Detroit is averaging 52,046 tickets sold at home games this season, leading only Washington in attendance numbers per game this season.

With apathy setting in with fans, who have faithfully supported a team despite it having one playoff win in six-plus decades, the Lions will have to win to get them back.

Week by week, there are more doubts that will happen this season.

The Lions are going into their bye after a humiliating defeat against an Eagles team that had won just two of its first seven games.

Detroit was coming off a relatively respectable showing against former teammate Matthew Stafford and the Los Angeles Rams on the road, where they went into the fourth quarter with the lead. And, the Lions have been competitive in a handful of other games this year.

Philadelphia, though, pushed the Lions around on both sides of the ball to control the game.

The Motor City's NFL franchise is idle until playing at Pittsburgh on Nov. 14 and it doesn't return to Ford Field for a game until hosting Chicago on Thanksgiving.

“Am I frustrated? I am," Campbell acknowledged. “Am I upset that we’re where we’re at? Yeah, I am, but I have not lost confidence because I still know we are not the team that played (Philadelphia). That’s not who we are. I don’t believe that one bit. We’re good enough to beat teams in this league."

T.J. Hockenson has become productive again after teams figured out a way to limit Detroit's go-to player on offense. The standout tight end had a career-high 10 receptions for 89 yards against the Eagles. He has averaged eight receptions the last few games after a three-week stretch in which he had a total of eight catches.

Jared Goff was sacked a season-high five times and his backup, David Blough, was sacked once. The Lions have struggled all season to throw the ball down the field and the lack of protection makes it even more difficult.

Running back Godwin Igwebuike, a converted safety, became the first NFL player to have 125 yards on kickoff returns, 40 yards receiving and 15 yards rushing since New Orleans' Alvin Kamara did it in 2017.

After limiting the Rams to 2.5 yards per carry and a total of 47 yards rushing, the Lions allowed Philadelphia to have two backup running backs score twice and help the team gain 236 yards rushing.

“We did want to make them beat us with the run game, and they certainly did that," Campbell said.

Detroit has to decide later this week whether it will put offensive tackle Taylor Decker on the active roster to at least potentially return this season, or to keep him out to help his finger heal 100% for 2022.

2.4 — The offensively challenged Lions were losing 17-0 at halftime to Philadelphia in part because they averaged 2.4 yards per play in the first half.

Campbell plans to give veterans a break to rest their body and minds while putting younger players through competitive situations in practice to let them develop and get evaluated by the coaching staff.