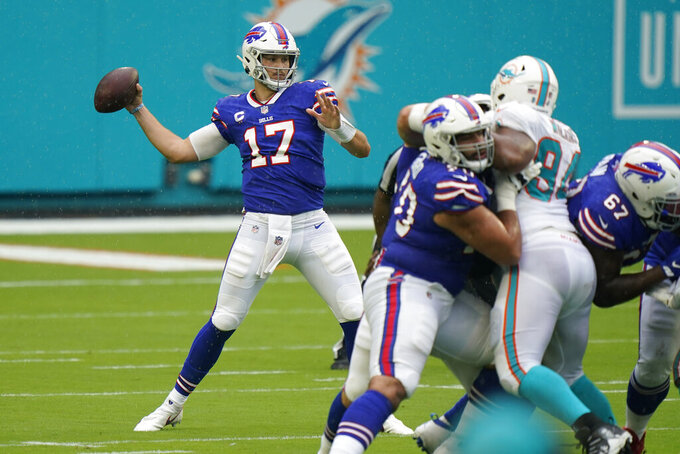 Buffalo Bills quarterback Josh Allen (17) looks to pass, during the first half of an NFL football game against the Miami Dolphins, Sunday, Sept. 20, 2020 in Miami Gardens, Fla. (AP Photo/Wilfredo Lee)

ORCHARD PARK, N.Y. (AP) — Josh Allen not only lifted the Buffalo offense in matching the third most prolific passing performance in team history.

The third-year starter provided the Bills' weary and injury depleted defense a tremendous boost in capping his seventh-career fourth-quarter comeback in a 31-28 win over the Miami Dolphins on Sunday.

And don’t think the defenders didn’t notice in a game Buffalo was missing its interior core with linebackers Tremaine Edmunds and Matt Milano sidelined.

“We couldn’t get off the field,” safety Micah Hyde said of a unit which allowed the Dolphins to take a 20-17 lead with 10:11 remaining, when Jordan Howard scored on a 2-yard run to cap a 10-play, 44-yard drive.

“And then the offense, man, they just stepped it up,” Hyde added. “We don’t like giving up, I think it was 28 points. That’s not winning football on our side of the ball. But, the offense picked us up. ... They have our backs.”

On a team previously known for its sturdy defense, which finished among the league’s top the in fewest yards allowed in each of the past two seasons, the Bills' offense is finally showing signs of carrying its share of the load.

More significant, perhaps, was the victory, which has Buffalo off to a 2-0 start, marking the first time the Bills have won when allowing 28 or more points since now-Dolphins starter Ryan Fitzpatrick rallied the team to a 34-31 win over New England on Sept. 25, 2011.

Since then, the Bills had lost 38 consecutive games when allowing 28 or more points, and were 9-67 when allowing 21 or more — including 3-19 in three seasons under coach Sean McDermott.

The offensive eruption is a combination of Allen maturing into the job, the continuity he’s enjoyed in his third season with offensive coordinator Brian Daboll, and the dynamic dimension offseason addition Stefon Diggs has provided a group of receivers rounded out by John Brown and Cole Beasley.

Diggs, who had eight catches for 86 yards in a season-opening 27-17 win over the Jets, entered Monday with 239 yards receiving, tied with Atlanta’s Calvin Ridley for the league lead.

Allen’s 729 yards passing, meanwhile, currently lead the league. And he became just the fourth NFL player to top 700 yards with at least six touchdowns and no interceptions in the first two weeks of a season, joining Peyton Manning (2013), Tom Brady (2015) and Patrick Mahomes (2019).

A year ago, Allen had 750 yards passing through his first three games, and was held under 200 yards six times overall, That offense failed to score 21 or more points 11 times, including a 22-19 overtime loss to Houston in an AFC wild-card playoff.

“Josh is our leader, and he’s a guy that all of us are following,” safety Jordan Poyer said. “Every week you come out there wondering what crazy stuff is Josh going to do.”

Shoring up the middle of the defense should Edmunds (shoulder) and Milano (hamstring) miss more time. The Dolphins exposed the weakness with tight end Mike Gesicki catching eight passes for 130 yards — both career highs — and a touchdown.

Rookie kicker Tyler Bass bounced back in hitting a 39-yard field goal and all four extra-points a week after missing two of four field goal attempts.

CB Levi Wallace struggled in coverage in a game Buffalo allowed 328 yards passing, the most since giving up 384 in a 30-27 win over Tampa Bay on Oct. 22, 2017. Offseason free-agent addition Josh Norman was competing with Wallace for the starting job before hurting his hamstring last month. Norman will miss at least one more game.

Edmunds, who practiced on a limited basis last week, has a chance to return, while Milano’s status is uncertain. Tight end Dawson Knox remains in concussion protocol after being hurt Sunday.

2-0 — Josh Allen joins Hall of Famer Jim Kelly, Joe Ferguson and Jack Kemp in being the only Bills QBs to lead the team to 2-0 starts in consecutive seasons.

Allen and Co. will have to continue holding up their end with the Los Angeles Rams making their first visit to Orchard Park, New York, in eight years. The Rams (2-0) have topped 400 yards offense in both games, and are coming off a 37-19 win at Philadelphia, in which tight end Tyler Higbee scored three touchdowns.