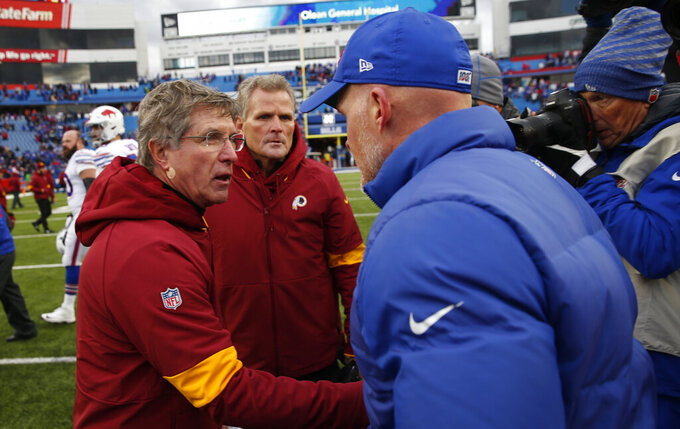 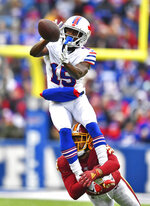 ORCHARD PARK, N.Y. (AP) — Micah Hyde sees no reason why the Bills should apologize for taking advantage of a soft season-opening schedule.

The Buffalo safety needed only to point to how the Bills have flipped their record, going from 2-6 a year ago to 6-2, following Sunday's 24-9 win over the Washington Redskins, who dropped to 1-8 in rookie quarterback Dwayne Haskins' first career start.

"I'm done apologizing for wins," Hyde said. "I'm not too worried about the strength of schedule or anything like that. It starts with each and every week getting a win and we got that this week."

Buffalo is off to its best start since going 7-1 in 1993. But skeptics can point out the Bills' six wins have come against teams that entered this weekend with a combined 7-31 record.

The Bills didn't exactly ease concerns following an inconsistent performance against an opponent that has already changed coaches and turned to Haskins with starter Case Keenum in the NFL's concussion protocol.

After leading 17-3 following its first three possessions, Buffalo allowed Washington to cut it to eight before rookie Devin Singletary scored on a 2-yard run with 2:21 left.

"Listen, we're a work in progress," coach Sean McDermott said. "We're 6-2 with a lot of games to play and we've got to continue to improve."

Washington matched its worst start to a season since 1998. Its offense has now gone 13 quarters since scoring a touchdown, dating to Keenum's 33-yard TD to Terry McLaurin in a 17-16 win at Miami.

"It's frustrating. It's kind of the similar template to how we've been playing in recent weeks," interim coach Bill Callahan said. "We get in a position and whether it's a penalty or an incomplete pass or we get stuffed on a run, we don't make up, and we just don't close out a third-down red-zone play."

Haskins was efficient in going 5 of 8 for 57 yards in the first half, when running back Adrian Peterson was exposing holes in Buffalo's suspect run defense by gaining 101 yards on 10 carries.

But the Ohio State product was unable to fill the offensive void in the second half, when Peterson was limited to 7 yards on eight carries.

Haskins finished 15 of 22 for 144 yards while Dustin Hopkins accounted for all of Washington's points with three field goals, the longest from 39 yards.

"We've got to score touchdowns. That's the key to the game," said Haskins, who received words of encouragement from Peterson.

"He talked to me before the game about taking ownership of this," Haskins said. "And even though we lost, I think we took a good step as far as me taking command of the offense."

The Bills endured issues on both sides of the ball.

Buffalo's run defense started the game by continuing its porous performance from a week earlier, when it allowed a season-worst 218 yards rushing in a 31-13 loss to Philadelphia.

The defense responded in the second half by limiting Washington to 78 yards of offense and a field goal.

"It's a great way to bounce back after what happened last week and not let that hangover drag on to the next week," defensive end Jerry Hughes said.

Up 17-9, the Bills finally put the game away in the final six minutes, starting with cornerback Tre'Davious White sacking Haskins for a 9-yard loss. That forced Washington to punt from its own 4 to set up Singletary's score on the following drive.

Singletary finished with a season-best 95 yards rushing and 140 yards from scrimmage — the most since LeSean McCoy had 147 two years ago. The rookie took advantage of his most playing time this season, appearing to displace Frank Gore as Buffalo's featured running back.

It didn't get much better for Gore in the fourth quarter, when he was dropped for a 3-yard loss on third-and-1 from Buffalo's 31.

"He reminded me once asking him what would it be like if I ever coached against him," Frazier said, laughing. "And he said, 'Be careful what you wish for.'"

Washington: After a bye, host the New York Jets on Nov. 17.

Buffalo: At the Cleveland Browns on Nov. 10.