Column: NFL delivers draft when it matters most 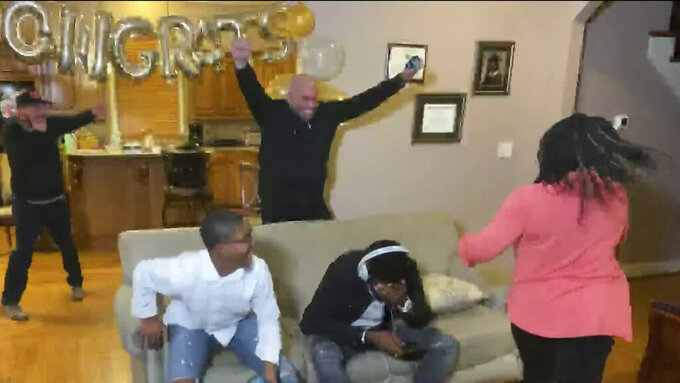 In this still image from video provided by the NFL, Noah Igbinoghene seated right, reacts during the NFL football draft Thursday, April 23, 2020, in Trussville, Ala. Igbinoghene was selected by the Miami Dolphins. (NFL via AP)

For a moment, at least, it looked like the NFL had made a late trade with the White House for Dr. Anthony Fauci to announce the 2020 draft picks.

He didn’t, but Alabama receiver Henry Ruggs was ready in his white quarantine robe anyway.

That wasn’t the only fashion statement made by Ruggs. After being taken by the Las Vegas Raiders with the 12th pick Thursday night he became the first person to officially don a hat celebrating the team’s new city, something that would have surely been more satisfying had it happened in front of huge throngs on the Las Vegas Strip instead of a few family members in his living room.

Roger Goodell made some fashion news of his own, appearing from his basement in a pullover sweater instead of his usual suit and tie. Indeed, casual was the theme of the night as a draft no one could have imagined even a few months ago played out across the nation before viewers starved for sports of any kind.

For the most part it wasn’t riveting television, though the same could be said about the last dozen drafts in normal times. And no one will be calling Goodell to audition to replace Jimmy Fallon on “The Tonight Show.”

But 32 players now have pro teams to play for. And fans now have plenty to get excited about, even if the actual 2020 season remains very uncertain.

Goodell and the NFL delivered, just when the country needed it most.

The biggest drama on this night wasn’t who was going to be the No. 1 pick — Joe Burrow sewed that up a long time ago — or how the top 5 would shake out. It was whether the NFL could pull off a draft from 100 or so remote sites to an audience that surely exceeded the millions who regularly tune in for the league’s biggest off-season exercise.

What they saw was a relatively smooth production with only occasional glitches, something that was remarkable just by itself. Yes, there was too much filler, too many commercials, and way too many talking heads, but the people behind the ESPN telecast did a marvelous job taking us around the country to peek in on the biggest day in the lives of 32 of America’s top players.

That the reactions mostly consisted of players looking into their phones didn’t exactly make it must-see TV. But there were smiles everywhere for this draft, if only because people were actually doing something normal in times that aren’t normal.

That included Dallas owner Jerry Jones directing picks from his $250 million yacht, and Bengals coach Zac Taylor making his from what looked like a conference room at a Hilton Garden Inn. We saw GM’s with their kids jumping up and down in delight behind them, and we saw coaches who for once didn’t seem to need to be in control of everything happening around them.

We saw Ruggs in his bathrobe, too, though that may have been more about product placement than fashion. And who knows what Giants GM David Gettleman was thinking when he donned a white face mask after making his pick despite seemingly being all by himself in a large room.

Fauci was a nice touch starting things off with words of both caution and hope to a country aching for the return of sports. So was Saints coach Sean Payton, who spoke of his gratitude for medical workers as he recovered from the coronavirus.

But the draft is all about the players, and we got to see them on their home turf for the most part. They mostly sat on their couches with a few family members, no commissioner to hug and no fancy suit to wear.

Chase Young had a large picture of his late grandfather in front of him as he was picked second by Washington, a touching scene even without words. Others hugged their mothers, fathers, significant others, though they all kept the gatherings to less than 10 people as mandated by social distancing guidelines.

It wasn’t perfect, but it was real. So real that Burrow could hear the cheers from his home in impoverished Athens, Ohio.

“I was going to go to Vegas and walk across that stage and it was going to be awesome,” Burrow said. “But as soon as the pick came in, people were driving by the house, honking their horns, screaming out the window — that’s the kind of place that it is here.”

It turned out to be quite a night for the No. 1 pick.

And not too shabby for the NFL either.