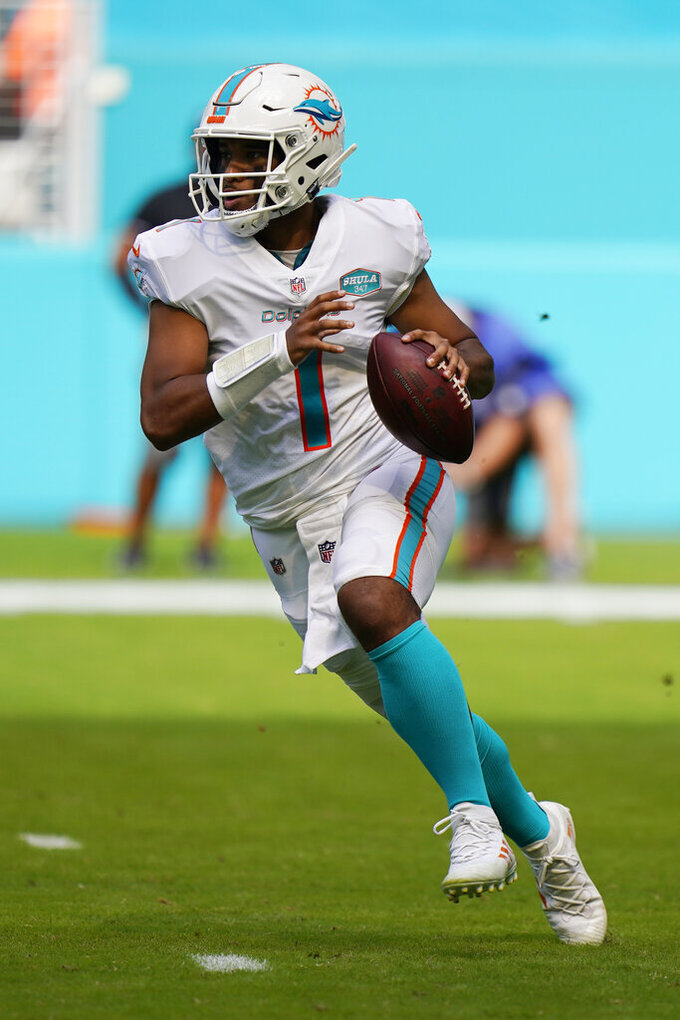 Miami Dolphins quarterback Tua Tagovailoa (1) looks to pass the ball, during the first half of an NFL football game against the Los Angeles Rams, Sunday, Nov. 1, 2020, in Miami Gardens, Fla. (AP Photo/Wilfredo Lee)

MIAMI (AP) — One thing in Tua Tagovailoa’s favor the rest of this season is that he won’t have to face his own defense.

While the attention lately has been on the rookie quarterback for the Miami Dolphins, they’ve forged a three-game winning streak by dominating defensively. It’s a unit that has undergone a remarkable transformation in the past 12 months under coach Brian Flores, from last in the NFL in points allowed to first.

The latest gem came Sunday in a 28-17 win over the Los Angeles Rams. Strip sacks accounted for half of Miami's scoring, including Andrew Van Ginkel's 78-yard fumble return for a touchdown, and an interception led to another TD.

“It’s a blast," Van Ginkel said Monday. “The coaches do a heck of a job putting us in the right spot to succeed and make plays like this. That's what we enjoy doing.”

By harassing Jared Goff all afternoon with a package of blitzes, the defense took pressure off Tagovailoa. The heralded rookie threw for only 93 yards but came away a winner in his first career start as the Dolphins improved to 4-3.

A year ago, in Flores' first season as coach, the Dolphins were 0-7 and allowing 34.0 points a game. They went on to surrender the most points in franchise history.

This year, with five new starters, the Dolphins are giving up 18.6 points per game. They're tied for second-best in takeaways per game at 1.9, and in third-down conversions at 33%.

The dramatic improvement has come with little fanfare or star power. Not one Dolphins defender made the Pro Bowl last year.

"People keep sleeping on our defense, and that’s fine,” safety Eric Rowe said. "We’re going to show up every week.”

While Flores' Dolphins were winless at this time a year ago, they're 9-7 in the past 12 months.

"The heart of it is the players — credit goes to them," Flores said. "I'm not out there tackling anybody. Nobody wants to see that.”

The defense might be good enough to buy time for Tagovailoa to go through growing pains, and that was the case Sunday, when the rookie led an offense that netted only 145 yards.

“Some good plays, some bad plays,” Flores said of Tagovailoa. “A lot of things we can get fixed. Hopefully we see some improvement next week."

Tagovailoa looked overmatched at times, such as when he fumbled and was body-slammed by 305-pound Michael Brockers the first time he tried to pass. At least the rookie showed he can take a hit in his return from a hip injury that ended his Alabama career.

“There were certain plays where I could have stepped up and made the right throw, made the right decision,” Tagovailoa said. “But I heard it many times from the guys in the locker room: It’s good that we still came out with the win.”

The Dolphins are above .500 for the first time in 23 games under Flores, and they've joined the postseason picture with wins over two other contenders, the Rams and 49ers.

Miami is second in the AFC East, two games ahead of longtime nemesis New England, and has by far the division's best point differential at plus 58. For the first time in six years, the Dolphins have won three games in a row by at least 10 points.

Myles Gaskin and Matt Breida combined for 60 yards on 22 carries against the Rams, which lowered Miami's season average to 3.6 yards per attempt, second-worst in the league.

The promotion of Tagovailoa sent to the bench last year’s leader rusher, Ryan Fitzpatrick. Maybe Flores should try the 37-year-old quarterback at running back.

First-round draft pick Austin Jackson, who started the first four games before he went on injured reserve with an ankle injury, might return this week.

5 — Rowe had a career-high total in passes defensed, which tied for the most by a Miami player since at least 2000. He also made an interception, but dropped a pass that could have been a pick-6.

“I’m hurt, because I know all I had was just grass after that," Rowe said. "It’s probably going to eat at me all the way until next game.”

The Dolphins already have two wins against the tough NFC West and are scheduled to play Sunday at Arizona (5-2).

The schedule could change, however, because two Cardinals tested positive over the weekend for the coronavirus.