On Football: Brady in the way of Chiefs' 2nd straight title 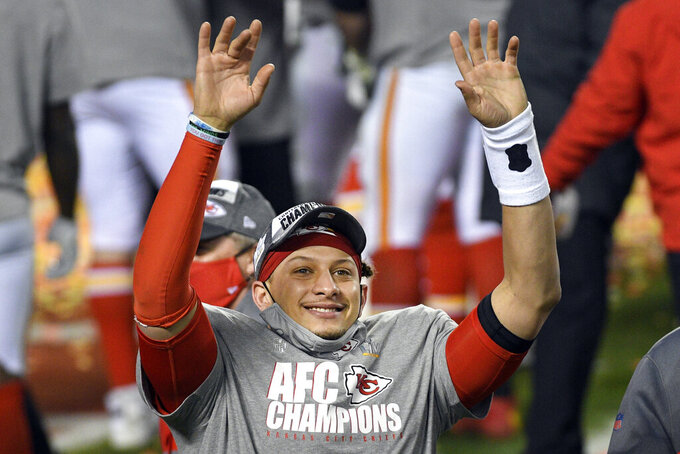 Considering that there has been no repeat NFL champion since the 2004 season, clearly some major obstructions have gotten in the way.

For the Chiefs, that hurdle wears a No. 12 jersey and is the last guy to pull off the feat.

After demolishing Buffalo for the AFC title, the Chiefs head to Tampa looking to complete the double. It's been done eight times, twice by the Steelers. But there's never been such a gap for a repeat winner, and after winning its first Super Bowl in a half-century last year, Kansas City seems primed to end that string of failures.

Except for that massive roadblock named Tom Brady.

“The job’s not finished," Chiefs quarterback Patrick Mahomes acknowledges. "We’re going to Tampa, we’re trying to run it back.”

To do so, young Mr. Mahomes, you'll need to beat that old man and his penchant for collecting trophies and rings.

“We’ve just got to be ourselves," added Mahomes, at 25 a mere 18 years younger than Brady. (Heck, Mahomes' father is only 50 years old.) "I trust my guys over anybody.”

The rest of the world has learned to trust Brady over most anybody.

The quarterback of the Patriots when they took the Lombardi Trophy for the 2003 and 2004 seasons, Brady owns a nonpareil six rings altogether. He's headed to his 10th Super Bowl, and the big game will be played at Raymond James Stadium, which happens to be the Buccaneers' home field. Add another record to Brady's ledger.

“The belief he gave everybody in this organization, that this could be done,” says Bucs coach Bruce Arians of Brady. “It only took one man.”

When Brady signed as a free agent with one of the historically worst franchises in the sport — the Bucs won their only visit to the Super Bowl 18 years ago, hadn't been to the playoffs since the 2007 season, and have a 278-429-1 overall record — faith was reborn in Tampa.

A leap of faith, it seemed. Like needing a Hail Mary for the Bucs to rise to the championship level. Then they went 11-5 to become a wild-card team spending all of January on the road.

Big deal. After victories at Washington, New Orleans (which beat the Bucs twice in the regulars season) and Green Bay, they head back home. To host a Super Bowl they are playing in.

“We were at 7-5 seven games ago, not feeling great,” Brady explains. "We felt like we needed to find our rhythm. We played four games down the stretch the last quarter of the season, and then after that, it was just all bonus. The guys came through. Everyone stepped up to the challenge.

"It takes everybody, and everybody plays a role. I’m just so proud of this whole team and blessed to be a part of it.”

The Chiefs are well aware of what Brady means in a championship chase. For those two decades when New England was dominating the AFC, Kansas City enviously watched. What the Chiefs witnessed then is what is playing out now: Brady as the centerpiece — and by far the most important piece — of a franchise.

He's stamped himself as the overriding reason the Patriots were so good; look at them now without him. And look at what the Bucs have achieved already with him.

When Brady won those successive Super Bowls, he was only beginning to establish his championship pedigree. He hadn't won an MVP award; he now has three. Nor had he won Offensive Player of the Year; he now has two.

He hadn't set many league records of note, either.

Today, he is the most successful player in the NFL's modern era. Even when he throws interceptions on three consecutive series, which he did Sunday at Lambeau Field, he and his team still find ways to win.

That's what Mahomes and his magic must overcome, and the Chiefs are early three-point favorites to do so. They come from the stronger conference. They win even when they aren't at their best, as happened last week against Cleveland. They shrug off deficits the way Travis Kelce shrugs off defenders. They boast a confidence reminiscent of, well, the QB in Tampa.

And that guy is the most challenging obstacle to get past.