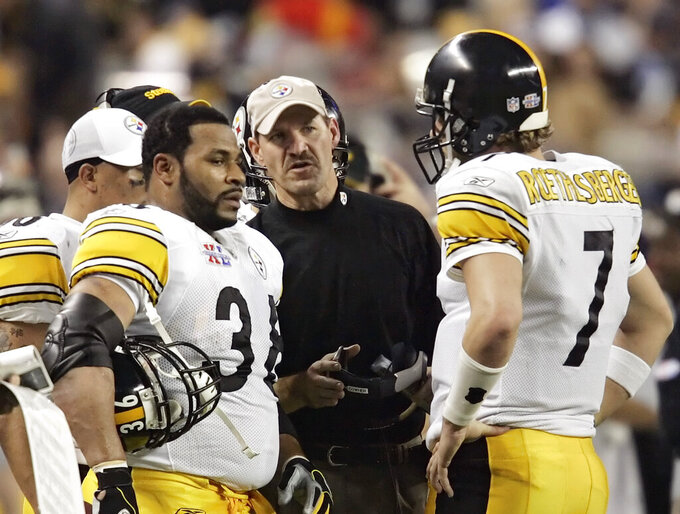 FILE - In this Sunday, Feb. 5, 2006 file photo, Pittsburgh Steelers head coach Bill Cowher talks with Jerome Bettis (36) and quarterback Ben Roethlisberger (7) in the second quarter against the Seattle Seahawks in the Super Bowl XL football game in Detroit. Former Pittsburgh Steelers coach Bill Cowher has been elected to the Pro Football Hall of Fame. Cowher, an analyst for CBS, was surprised by the announcement made live on air in studio before the Tennessee Titans-Baltimore Ravens AFC divisional round playoff game Saturday night, Jan. 11, 2020. (AP Photo/David J. Phillip)

Hall President and CEO David Baker delivered the news live in studio to Cowher, an analyst for CBS, during the network's “The NFL Today” pregame show broadcast.

“This isn't right that this is happening right now, but ...” a grinning Cowher told Baker, who then officially welcomed the former coach into this year's Hall of Fame class to be inducted this summer.

An emotional Cowher, now 62, hugged Baker and then his wife Veronica and daughter Meagan, who were standing off to the side of the set during the announcement. The rest of Cowher's CBS broadcast team, including James Brown, Boomer Esiason, Phil Simms and Nate Burleson also gave him congratulatory hugs.

They all later held up black T-shirts with “Hall of Fame” and "Bill Cowher" in gold letters.

Cowher was the coach of the Steelers for 15 seasons from 1992 to 2006, and led them to 10 playoff appearances including two Super Bowls and winning one — beating Seattle in 2006. His Pittsburgh teams won nine division titles.

“Football is a total team sport,” Cowher said while fighting back tears. “I had some great players, some great coaches, the best organization in football. I've lived a blessed life. I've come to the best network on TV. It's a family here, like it was a family that we had there.

"And to have to give back just something to the game of football, that's been a part of my life, the virtues that it teaches you, the morals that you have the obligation to move on, the platforms that we have, you know, I'm a blessed man and I've been very blessed to have been surrounded by some very special people."

The centennial slate includes 10 "seniors" (players who last played more than 25 seasons ago), three "contributors" (an individual other than a player or coach) and two "coaches" (who last coached more than five seasons ago) and were voted on from a list of 38 finalists. The remainder of the 15-person centennial slate will be revealed live on "Good Morning Football" next Wednesday.

The Hall's overall class will consist of 20 members, including an additional five who will be added the day before the Super Bowl, when the modern-era player finalists are voted on by the Pro Football Hall of Fame selection committee.

“I don't think it's hit me yet," Cowher said. "I mean, what can I say? I just think about the players. I just think about the Pittsburgh franchise, and Dan Rooney when he hired me, he took a chance on a 34-year-old kid from Crafton, Pennsylvania, and my first goal was just to not get fired before my 20th high school class reunion.”

Cowher went undrafted out of N.C. State in 1979, but signed with Philadelphia as a linebacker before joining Cleveland the next year and playing three seasons with the Browns. He was traded back to the Eagles in 1983 and played two more seasons as primarily a special teamer before beginning his coaching career.

His first stop was with Cleveland as Marty Schottenheimer's special teams coach, a position he held for two seasons before moving to defensive backs coach for two years. He followed Schottenheimer to Kansas City in 1989 and served as the Chiefs' defensive coordinator for three seasons.

Cowher was hired by Pittsburgh as its head coach in 1992, and he succeeded Chuck Noll. He gained a reputation for being a fiery and emotional coach, with his square chin making him an instantly recognizable figure on the sideline.

Cowher enjoyed success early in his head coaching career with the Steelers, winning five AFC Central titles in his first six years — and lost in the Super Bowl to Dallas in the 1995 season. After Pittsburgh missed the playoffs for three consecutive years, Cowher returned the Steelers to the postseason in 2001 and delivered the franchise its fifth Super Bowl title four years later.

He coached one more season with Pittsburgh before stepping down to spend more time with his family, including his first wife Kaye, who died from skin cancer in 2010. Cowher has been with CBS as an analyst since 2007.

“Bill was always a family man and made the tough decision to walk away at a young age to focus on them,” Steelers President Art Rooney II said in a statement tweeted by the team. “I am so happy for his entire family, and I'm sure this summer in Canton will be (a) special time for Bill and all of Steelers Nation.”

Current Steelers coach Mike Tomlin, who was hired to replace Cowher in 2007, said he was “so happy” for Cowher.

“Bill had an incredible career and left his mark on the @steelers organization, Pittsburgh and the NFL," Tomlin tweeted. “The @ProFootballHOF got themselves a great addition with @CowherCBS. Congrats Bill. You deserve this great honor.”

Several of Cowher's former Steelers players offered their congratulations on social media, including Hall of Fame running back Jerome Bettis.

“My coach in Pittsburgh,” Bettis wrote on Twitter, “and now my forever coach in Canton!!”