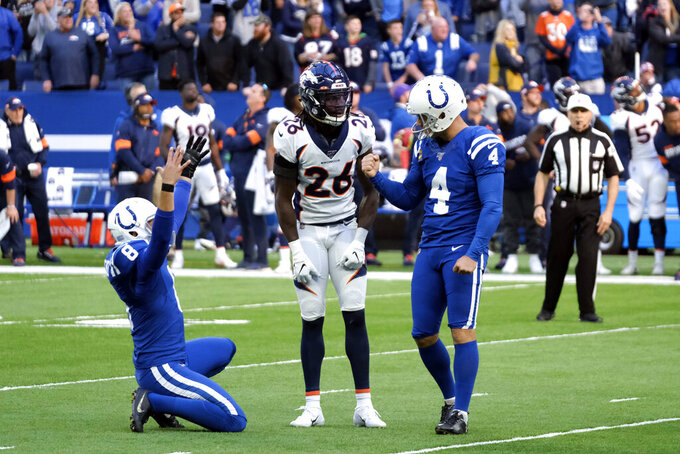 They beat Kansas City by playing ball control. They beat Houston when quarterback Jacoby Brissett delivered his best game as a pro. On Sunday, they beat Denver by scoring the final 12 points, overcoming two missed kicks and getting a strip sack on the final play of the game.

While some critics contend the Colts aren't earning many style points or much respect winning five games by a total of 20 points, coach Frank Reich calls it a thing of beauty.

"If we want to be a good team, we've got to prove we can win games like the one yesterday not just once in a while but consistently," he said Monday on a conference call. "We feel really good about our players just hanging in there and winning any type of game."

It's hard to quibble with the results.

Sunday's 15-13 come-from-behind victory over Denver was Indy's third straight, keeping it atop the AFC South with division wins over Tennessee and Houston already on the books.

They've won despite losing franchise quarterback Andrew Luck to retirement, despite the three-game absence of All-Pro linebacker and defensive leader Darius Leonard, despite playing musical chairs at safety and receiver. They've won with a steadily improving defense and without an offensive line that hasn't yet reached the high performance of last season.

Players and coaches believe that means only better things ahead for the Colts (5-2) as they build momentum.

"I've been on teams here — a bad thing happens and we fold, thinking back to 2017 or whatever," tight end Jack Doyle said. "Not this team, man. The players, the coach, it just, it can rally a team and give you confidence. You want to play for those guys."

That much has been clear almost from the moment Reich returned to Indy in February 2018.

He never fretted about Luck's health before being hired and acknowledged repeatedly that even if Luck didn't come back he believed he could win with Brissett.

Reich managed to get the locker room to rally round the message then and now as they take control of the division race with Pittsburgh and Miami up the next two weeks followed by three straight division games.

And Reich insists the Colts have the perfect mix.

"I think we have tough-minded players who have the mindset of figuring out how to play winning football and trying to do the little things right," he said. "One of the points of emphasis every team makes but we harp on it a lot is all the situational stuff — the little things, the penalty things that didn't play out so well for us yesterday. But I think we're doing, for the most part, the little things you need to do to win close games."

Defense in the red zone. After holding Houston to two touchdowns in five red zone trips last week, Indy forced Denver to settle for field goals of 21 and 29 yards with only one TD.

Avoiding penalties. The Colts have been among the league's most successful teams in this category most of this season. On Sunday they were flagged 10 times for 103 yards, including two defensive penalties on the Broncos' only TD drive.

RB Marlon Mack. The rollercoaster season continues for Indy's top back. After being held in check by Houston, Mack produced 76 yards on 19 carries against Denver and scored Indy's only TD.

Wide receivers. The Colts threw 25 passes against Denver with less than half going to the outside receivers. T.Y. Hilton, Chester Rogers, Zach Pascal and Parris Campbell combined for four catches for 67 yards and no scores.

S Khari Willis did not return Sunday after suffering a foot injury. He had been among the league's top rookie tacklers this season, and Reich said Monday the preliminary reports were "positive."

10. In Year 2 under defensive coordinator Matt Eberflus, the Colts thought they could become a top-10 defense. They've improved steadily and after Sunday have cracked the top-15 in passing defense, rushing defense, total defense and scoring defense.

The Colts need to find more consistency on offense as they head to Pittsburgh on Sunday.

Dan Greenspan 44 minutes ago
By Dennis Waszak Jr. 2 hrs ago
By Dave Campbell 3 hrs ago
3 hrs ago
By Joe Reedy 4 hrs ago