Jags acquire LB Correa from Titans for 6th-rounder in 2021 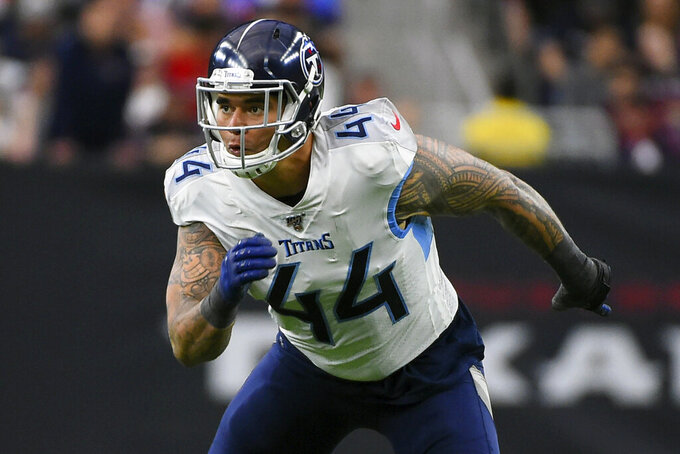 FILE - In this Dec. 29, 2019, file photo, Tennessee Titans outside linebacker Kamalei Correa rushes against the Tennessee Titans during the first half of an NFL football game in Houston. The Jacksonville Jaguars acquired ] Correa from the Tennessee Titans on Wednesday, Oct. 14, 2020, for next to nothing. The Jaguars sent a sixth-round pick in 2021 to the Titans for Correa and a seventh-round selection. (AP Photo/Eric Christian Smith, File)

JACKSONVILLE, Fla. (AP) — The Jacksonville Jaguars acquired linebacker Kamalei Correa from the Tennessee Titans on Wednesday for a late-round pick.

The Jaguars sent a sixth-round selection in 2021 to the Titans for Correa and a seventh-rounder.

Tennessee coach Mike Vrabel said earlier in the day the team was preparing to release Correa, who was activated off the team's reserve/COVID-19 list before Tuesday night's game against Buffalo. He was inactive for the victory after spending two weeks on the COVID list.

“Now, things change, someone may reach out and that would be another situation that could happen,” Vrabel said. “But as of now, I think we’ll plan on going in another direction and moving on.”

Jacksonville did, looking for depth at the linebacker position. The Jaguars (1-4) played without starter Myles Jack (ankle) last week at Houston and lost backup Dakota Allen (foot) in the team's fourth straight loss.

Tennessee (4-0) re-signed Correa in March after he tied for second on the team with five sacks in 2019. But he became expendable with the addition of veteran pass rushers Vic Beasley and Jadeveon Clowney.