Jets feeling sense of urgency for season after just 1 game 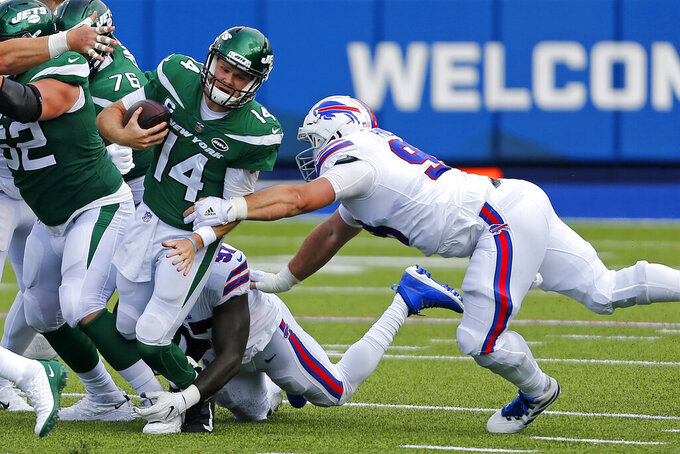 That's all it took for the New York Jets to feel a sense of urgency to get things turned around.

After a 27-17 season-opening loss at Buffalo on Sunday during which coach Adam Gase acknowledged “there was no complementary football,” the Jets have to get ready to host the San Francisco 49ers. Oh, and the defending NFC champions also are 0-1 after blowing a fourth-quarter lead to Arizona and surely looking to rebound against a squad that looked lost in every phase.

Jenkins said during the summer he was tired of losing. The 2016 third-round draft pick has gone through four straight losing seasons, and New York hasn't made the playoffs since 2010.

That was on all sides of the ball. There were questionable play calls by Gase, bad decisions by quarterback Sam Darnold, some dropped passes, missed tackles and blown assignments.

It all added up to an 0-1 start that has many Jets fans concerned that they've got another long season in store.

“We don’t have a choice,” Gase said. "We have to get better. We cannot play like we did this last game.”

Well, not much, really. When rookie punter Braden Mann is a bright spot after punting six times for a respectable 46.3 yard gross average, you know things are probably grim.

The offensive line, which had five new starters from Week 1 a year ago, wasn't bad. First-round pick Mekhi Becton held his own in his NFL debut at left tackle.

“Considering last year that it felt like it was a constant avalanche, it didn't feel that way this time around,” Gase said. “It felt like our guys did a better job of giving Sam some time.”

You name it, the Jets need it. It starts with Darnold, though, and he knows it.

The third-year quarterback made some bad mistakes against the Bills and never appeared to be comfortable. He overthrew a few receivers, hurried throws and had bad footwork at times.

“We definitely left some yards out there on the field and it's things that we can control,” Darnold said. “We've just got to get better. ... They're definitely fixable mistakes, which is a good thing.”

Marcus Maye. There was lots of concern over how much the Jets were losing when they traded star safety Jamal Adams to Seattle, but Maye looked good filling the role his former secondary teammate handled as a disruptive playmaker.

“He's just an athlete,” Jenkins said. “He's not going to back down from anybody and get it done. He's just going to go out there and be a ballhawk.”

Darnold. His final numbers look mostly respectable: 13 of 26 for 157 yards with a touchdown and an interception. But consider this: Darnold was 8 of 9 for 58 yards during the Jets' final drive. That one score was also a short throw to Jamison Crowder, who turned it into a 69-yard touchdown.

It certainly wasn't the start he — nor the Jets — expected to kick off the season with.

“I kick myself a lot for missing throws, and missing three in a row that I usually don't miss," Darnold said. “For me, it's little things. It's taking a deep breath, playing a little slower, quieting my feet down. And the little details that we can clean up in the run game and the pass game.”

Gase acknowledged he needs to do a better job with helping his young quarterback.

“Early, we couldn't get into a rhythm,” Gase said. “I was trying to find the right call to get him going a little bit. ... I've just got to get him more in a rhythm early in the game.”

Running back Le'Veon Bell (hamstring) and inside linebacker Blake Cashman (groin) could both miss a few weeks with injuries. Bell was hurt late in the second quarter and returned in the second half before he was pulled out of the game. Gase won't put a timetable on either player's return because they're soft-tissue injuries, but he remains optimistic Bell could be back sooner than anticipated. If Bell can't play Sunday, 37-year-old Frank Gore will likely start in his place.

18:44 — That was the Jets' time of possession, compared with the Bills' 41:16. That ties Minnesota for the shortest time in the league with the ball, heading into Monday night's games. Six of New York's 11 offensive drives were three-and-outs.

It would seem to have to be all up from here, but a hungry opponent looking to shake off a tough loss stands in the way. Darnold, who shouldered the blame for the Jets' opening loss, remains confident that he — and the rest of the team — will get things turned around. And soon.

“We’ve got to put it all together," Darnold said. "And when we do, we’re going to start having success.”