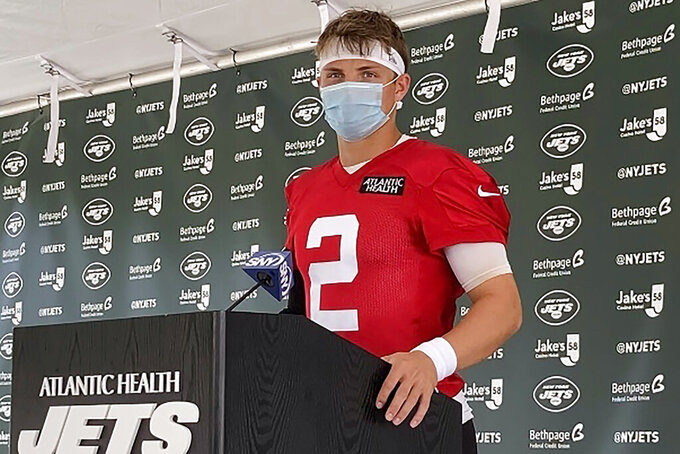 FLORHAM PARK, N.J. (AP) — Zach Wilson dropped back for his first pass of his first practice of training camp and let loose.

A pretty, rainbow-like toss was snagged in coverage by Elijah Moore, and the 40-yard play had the New York Jets' offense fired up. It turned out to be the best moment of the understandably rusty rookie quarterback's day.

Wilson missed the first two practices of camp while waiting to have his contract issues settled, and then was on the field Friday trying to quickly get up to speed.

“I wouldn't say I'm behind,” Wilson said. “It's just my first live bullets again, you know? It's just getting back into the mix. I know the plays, I know my assignments. I've just got to execute.”

The No. 2 overall pick signed a four-year, $35.15 million contract Thursday, ending his brief holdout after the Jets and Wilson's agents worked out the deal following haggling over some of the terms. He took a red-eye flight Wednesday night from California, where he was working out with personal trainer John Beck, and got to the facility Thursday to ink the deal.

Wilson had been in touch with offensive coordinator Mike LaFleur while he was away, and the former BYU quarterback tried to keep up with the playbook and the installation of the plays.

“You can only do so much on an iPad, right?” Wilson said. “It’s not simulating a real game. And so, it’s in my head. I’ve studied it and now it’s like, how can I translate it to the field? ... Now it’s just applying it here.”

After that first throw, which came on Wilson's second snap of team drills and he called “not the greatest ball,” he mostly struggled.

He was 5 of 10 in 11-on-11 sessions and was intercepted by Marcus Maye with the receiver nowhere in the vicinity. After Mike White and James Morgan split first-team snaps over the first two days, Wilson took them all Friday, as well as a few others with the second-team offense.

“For him, it’s getting caught up, find a way to get better every day,” Saleh said. “I know sometimes we can get focused on results, but there’s process. He’s got a tremendous process. You can’t control certain things that happen play in and play out, but you can control your process and how you approach things day in and day out.

No, there's no panic.

Not after one practice; he hadn't gone up against a defense in six weeks. Wilson's timing was a bit off, and so were his throws. He doesn't expect that to be the case much longer.

"That’s what practice is for,” Wilson said. “Every day is going to have something frustrating. That’s why I’m out here. I’m just trying to learn each day, just knowing my plays better and the different looks the defense is throwing at us. It’s going to be a process.”

With no veteran quarterback on the roster and neither White nor Morgan having thrown a pass in a regular-season NFL game, it would appear but a certainty that Wilson will be under center when the Jets travel to Carolina to face the Panthers — and their former QB Sam Darnold — on Sept. 13.

Despite all that, and the fact Wilson is already the new face of the franchise, Saleh wasn't about to declare anything just yet.

“Call it the inside lane,” Saleh told the media. “I mean, it’s his to lose, but I never want to make a promise I can’t keep. Hopefully you guys understand that part. But you guys saw, he took all the first-team reps. So it’s just a matter of him continuing to get better like we know he will and progress the way we expect him to.”

Wilson spent extra time after practice talking to LaFleur and quarterbacks coach Rob Calabrese, both of whom will be key in the young QB's development. The loss of Greg Knapp will be tough to overcome, though, after the passing game specialist died last Thursday from injures suffered when he was hit by a car while riding his bicycle near his home in California on July 17.

“At first, it was shock because I had just been talking to him the day before the incident happened,” Wilson said. “It was almost like I didn’t believe it. I felt like I could have called him right then and he would have picked up the phone and answered.”

Wilson will look to draw on what he learned from Knapp and keep devouring the playbook, so his first-day struggles soon become a distant memory.

“He’s got tremendous confidence,” Saleh said. “He walks into the huddle and he’s not stuttering. He’s giving a play call. He gets to the line of scrimmage, he gets people lined up. So he’s got that leadership and presence to him. And it’s only going to get better.”

Oh, and any big plans for some dream purchases after getting his deal done?

NOTES: The Jets signed K Matt Ammendola and released kicker Sam Ficken, who had been with New York since 2019. Ammendola was most recently with Carolina this offseason after going undrafted out of Oklahoma State in 2020. He'll compete with Chris Naggar for the placekicking job. Ficken had a shaky start to training camp, missing from 53 and 55 yards on Friday. He was 32 of 42 on field goal attempts with the Jets the last two seasons, and 35 of 41 on extra points.