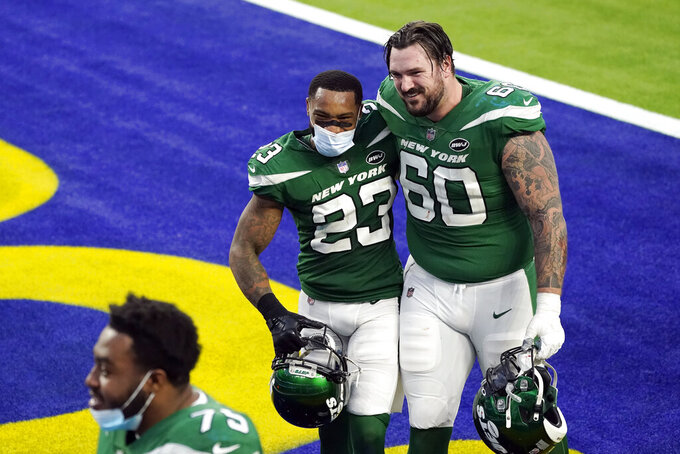 NEW YORK (AP) — The New York Jets know how many of their fans feel today. They also know this can’t happen again.

A 23-20 victory over the stunned and embarrassed Los Angeles Rams on Sunday ended a nightmarish crawl to a potential 0-16 season and a dubious spot in NFL history.

It also might have ended the Jets' chances of getting the No. 1 pick and Clemson quarterback Trevor Lawrence in the NFL draft in April.

Having players happy but fans angry about a win — and both be right — says everything about the state of the franchise. The task for the Jets, and it's a massive one, is to make sure both sides are never again in this awkward spot.

“It’s a huge relief for a lot of the guys in the locker room to be able to get this win,” quarterback Sam Darnold said Monday, “and it means the world to us.”

For many fans, though, there was just sheer disappointment. Check Twitter or Facebook, or turn on sports radio today and there's no shortage of frustration. And, that's after a win.

Rookie left tackle Mekhi Becton has been one of the few bright spots for the Jets while quickly pancake-blocking his way to being a fan favorite. But even he ticked off some of those same supporters when he questioned fans' loyalty during a postgame interview with SNY.

“You ain’t really a fan if you didn’t want us to win, honestly,” Becton said. “I mean that in the nicest way possible. I don’t mean that in a disrespectful way. But I mean if you wanted us to lose, you’re not a real fan, honestly. We've worked too hard to just go out there and take a loss every week.”

This is where the unfortunate separation in perspectives has occurred.

Tanking is never in the game plan for coaches and players, even when losing now could pay off in the future. For the fans who have gone years — and, some, decades — waiting to feel good about their team, the bigger picture represents the hope for the future in the face of losing.

Jacksonville is now the front-runner to pick first in the draft, with the Jets sitting at No. 2. There will be massive changes this offseason for New York, starting first with the likely firing of coach Adam Gase. From there, the Jets brass will need to decide on someone to lead the franchise and whether Darnold is still the quarterback of the present and future.

If not, general manager Joe Douglas will be able to target someone — likely other than Lawrence — with that pick. Or, maybe he goes for a sorely needed edge rusher. Or, he could trade down and collect more selections.

Either way, the Jets have to make it up to their fans. By winning — and everyone being happy about it. Not just the players.

“The excitement they had on the way home,” Gase said of his team, “it was fun to see as somebody that’s been through a lot of different things in my career, I don’t think I’ve seen a group more excited after a game than what I saw last night.”

Third-down defense. This has been a problem for the Jets all season, but they were able to clamp down on the Rams on Sunday. Los Angeles came in ranked sixth in the league in third-down offense, but went 2 for 11 in those situations against New York — including 0 for 7 in the first half.

Closing games. They let one slip away against Las Vegas two weeks ago, thanks to that all-out blitz call by since-fired defensive coordinator Gregg Williams. They nearly let another get away against the Rams, who actually scored a go-ahead touchdown but Cam Akers’ 18-yard run was erased by a holding penalty. New York led 20-3 in the third quarter before letting the Rams back into it with scores on three of their four second-half possessions.

Braden Mann. Yes, the punter. And not just because of the rookie's kicking. He made a touchdown-saving tackle on Rams punt returner Nsimba Webster late in the game when a score would have put Los Angeles in front. Mann hasn't been shy about mixing it up; he has four solo tackles this season.

Jets fans' hopes for Lawrence. With the Jaguars in the driver's seat for the Clemson QB, it might be time to brush up on the film and scouting reports for Ohio State's Justin Fields and BYU's Zach Wilson.

Defensive lineman Quinnen Williams is in the concussion protocol and his availability this week is uncertain. ... Linebacker Harvey Langi is continuing to be evaluated for a neck injury.

8 — That's how many consecutive games in which the Jets have scored on their opening drive, with three touchdowns and five field goals in that span. It's a franchise record and the longest active streak in the NFL.

The Jets try to put together a winning streak when they host Baker Mayfield and the Cleveland Browns on Sunday. The Browns are on the verge of clinching their first playoff berth since 2002, but New York wouldn't mind playing spoiler and getting win No. 2 in the process.