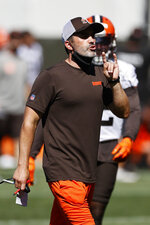 North Carolina State has paused all athletics activities due to a coronavirus cluster within its programs.

The school announced the move Monday evening, though it didn’t specify which programs were impacted by the cluster. In a separate release, the school said that not all of 27 positive cases reported involved athletes.

In a statement, athletics director Boo Corrigan said the school is working to determine “the most responsible path moving forward.”

In a tweet Monday, athletics spokesman Fred Demarest said the athletics department has conducted 2,053 tests to athletes, coaches and staff with 30 total positives for an infection rate of 1.5%. But those figures include 693 tests and 22 positives in the most recent set of results.

Louisville anticipates admitting 18,000 spectators at Cardinal Stadium with appropriate seat distancing along with increased physical distancing at entrances. The plan is subject to change and the school is working with state officials.

Plans call for the former ticket office and a store at one gate to be removed for 16 openings and 32 entrances, with additional staffing. Safety measures include distancing inside the 60,800-seat stadium and parking lots for tailgating, temperature checks and face coverings.

Louisville opens on Sept. 12 against Western Kentucky in its lone non-conference game before a 10-game Atlantic Coast Conference schedule.

The board of directors of the National Baseball Hall of Fame and Museum has voted unanimously to reschedule this winter’s two Era Committee elections because of concerns associated with the COVID-19 pandemic.

Hall of Fame Chairman Jane Forbes Clark says the Era Committee process requires in-person dialogue involving the members of the 16-person voting committee. In view of those concerns, she said the board decided that the Golden Days Committee and the Early Days Committee will instead meet during the winter of 2021.

The Golden Days Era Committee considers Hall of Fame candidates whose primary contributions to the game came from 1950 to 1969, and the Early Baseball Era Committee considers candidates whose primary contributions came prior to 1950. Each committee will consider a ballot of 10 candidates compiled by the Baseball Writers’ Association of America’s Historical Overview Committee, and those candidates will be announced in autumn 2021. Both committees will consider the ballots later that year and anybody elected will be enshrined in 2022.

Clemson football coach Dabo Swinney and men’s basketball coach Brad Brownell are among 15 members of the school’s athletic department taking a voluntary 10% salary cut as a way to offset expected losses due to the coronavirus pandemic.

The university also announced Monday a furlough program for affected employees starting Sept. 1 through the end of the year.

Clemson said about half of its full-time employees will be impacted by the cost-saving measures. University President Jim Clements is also subject to the 10% voluntary salary reduction.

An attorney representing the families of 11 Nebraska football players says Big Ten commissioner Kevin Warren has not responded to a letter seeking documents and other material outlining specifics of how the conference decided to not play football in the fall.

Mike Flood said in a statement that his "clients believe that transparency in decision making is not too much to ask when the health of student athletes, their future opportunities and the very survival of men’s and women’s sporting programs are at stake.”

A former speaker of the Nebraska Legislature, Flood asked the conference to produce documents relating to voting by the university presidents as well as meeting minutes and audio and video recordings and transcripts of meetings where votes were cast. He also asked for copies of studies, scientific data and medical information or advice considered by the presidents.

Flood threatened to file a federal lawsuit if he didn’t receive the requested material.

Iowa’s athletic department is working to secure a $75 million loan to cushion the blow of losing a projected $100 million in revenue because of the coronavirus pandemic.

Athletic director Gary Barta said the Hawkeyes had built a strong financial foundation before the coronavirus forced cancellation of the NCAA men’s basketball tournament and led to the Big Ten’s postponement of football until after Jan. 1. Now the athletic department faces a $60-$75 million deficit.

Iowa announced initial budget reductions in July, and after the Big Ten pulled the plug on fall football earlier this month the Hawkeyes announced Friday they would drop men’s gymnastics, men’s tennis, and men’s and women’s swimming and diving.

Barta said there are no plans to eliminate other sports and figures it will take about 15 years for the athletic department to pay off the loan. He said he had a “guestimate” for how much money Iowa could bring in from post-Jan. 1 football, but he declined to disclose the figure.

The Baltimore Ravens won’t have any fans at home games for the first part of the upcoming season because of the coronavirus pandemic.

The team had outlined a plan to accommodate a crowd of 7,500, but decided against it “based on the recommendations of public health experts.”

In a statement, the team said that “for the time being, it is in the best interest of the general public and our organization that fans not attend games.”

The Ravens said they will continue to work with health officials about finding a way to eventually make the stadium safe for fans during home games.

Jamaican world record holder Usain Bolt says on social media he is awaiting the result of a coronavirus test and is quarantining himself as a precaution.

The 34-year-old retired sprinter who won gold in the 100 and 200 meters at the last three Olympics posted a video Monday on his official Instagram account to explain the situation.

“Good morning everybody. Just waking up. Like everybody, checked social media and saw that social media says I’m confirmed of COVID-19,” he said. “I did a test Saturday, because I work. I’m trying to be responsible, so I’m going to stay in and stay here for my friends.”

Bolt added he has no symptoms.

“Just to be safe, I’ll quarantine myself and just take it easy,” he said.

Stefanski was at home with his wife and three children when he got word that he may have the virus.

“It wasn’t fun,” Stefanski said on a Zoom call. “I can laugh about it now, but truly it wasn’t fun to have that phone call very early in the morning and not get news that it was potentially an error until later.”

Stefanski said he immediately left his house as not to put his family in any more danger. He went to a condominium near the team’s facility where he stayed before moving his family to Ohio from Minnesota in the offseason. He spent the previous 13 seasons on the Vikings’ staff.

It took four hours before Stefanski learned he was negative. He was not able to coach on Sunday, when the Browns initially called off their workout before holding it when they learned of the flawed lab results.

Stefanski did not disclose how many false positives affected the Browns. He said 12 more players need to be cleared before they can practice Monday.

The 38-year-old coach praised the Browns for the way they handled “a fire drill” with their virus protocols.

Army has finalized its football schedule and the Black Knights will play 11 games, eight at home. Navy and Air Force remain on the schedule.

Attendance for the first two games in West Point, New York, is expected to be limited to the Corps of Cadets and exclude the general public.

Decisions on fan attendance for the remaining home games at Michie Stadium will be decided later.

The Black Knights will open the season Sept. 5 at home against Middle Tennessee State. The rest of the home slate includes Louisiana-Monroe, BYU, Abilene Christian, The Citadel, Mercer, Air Force and Georgia Southern.

Road games are at UTSA, Tulane and Philadelphia for the 121st Army-Navy matchup.

Bundesliga team Schalke has reported a positive case of the coronavirus in an unidentified member of staff at its training camp in Austria.

“The affected person is currently self-isolating after the test result. Contact tracing is already underway,” the club says on its website.

Schalke was due to play Würzburger Kickers in a friendly game later Monday but that has been called off as the club conducts further tests.

Team doctor Patrick Ingelfinger is liaising with local authorities on what the club should do next.

“We will do everything we are told to do by the authorities. The health and safety of everyone involved is the most important thing,” sports director Jochen Schneider said.

Duke will open its season for football and other fall sports with no fans at home games because of the coronavirus pandemic.

Duke says traditional parking lots used by fans on gameday will be closed. The school will contact football fans who have purchased season or single-game tickets or have seating and suite contracts in Blue Devil Tower regarding potential options.

The school will allow fans to purchase a fan cutout of a person or pet to be placed in seats for football games. The school will offer varied packages and stadium locations along with weekly prize drawings and the ability to have football coach David Cutcliffe autograph the cutout.

The school says sales proceeds will go to Duke Athletics for student-athlete support.

Athletics director Kevin White says it is “imperative to be both adaptable and compliant in anticipation of hosting fans in the near future.”

The Norwegian government says it will make an exception from its travel ban to accommodate a Nations League soccer game against Austria on Sept. 4 in Oslo.

Culture and sports minister Abid Q. Raja says “we make this exception to ensure that both teams can field a full crew.”

Raja adds “this is not a general exception ... this is an exception for this match.”