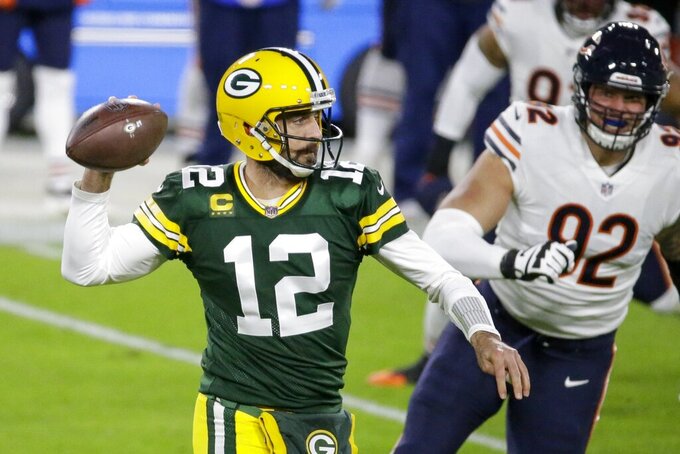 Green Bay Packers quarterback Aaron Rodgers is making a push for a third MVP honor as he celebrates his 37th birthday.

Rodgers, who turned 37 on Wednesday, has thrown 33 touchdown passes and is on pace to shatter his previous career high of 45 from his 2011 MVP season. Rodgers also was named MVP in 2014.

“You’re talking about one of the all-time greats regardless of position,” Packers coach Matt LaFleur said. “I don’t know how he does it, but he’s doing it.”

Rodgers says he owes much of the credit to his improved leg strength. He attacked offseason workouts with the approach that a veteran quarterback’s production starts to drop once his legs wear down.

He wanted to delay that process as long as possible.

“You’re always going to be able to throw it,” Rodgers said. “Being able to throw it is something that stays with you. I’ve said this before, I’m sure that (Dan) Marino can still sling it around and (John) Elway – guys that have big arms – (Bret) Favre-y, I know, can still throw it around. That doesn’t really go, but it’s the legs.”

The results aren’t evident in his rushing stats. Rodgers has four seasons of 300-plus yards rushing in his career but has run for only 90 yards so far this year.

But he believes his improved leg strength has made him a better passer this season.

“I just haven’t lifted this way, I don’t think, in a long time, where I’m having PRs squatting week to week,” Rodgers said. “That just doesn’t happen, especially not for an older guy. I don’t know what the science says, but I do know what it feels like. I know I’ve felt a lot better with my legs underneath me, and it’s allowed me to play in rhythm so much more this season.

Rodgers’ 33 touchdown passes represent his highest total since 2016, when he had 40. He has helped Green Bay (8-3) take a three-game lead in the NFC North standings heading into Sunday’s game with the Philadelphia Eagles (3-7-1).

He has stepped up his touchdown production while continuing his uncanny knack for avoiding mistakes. Rodgers has thrown four interceptions this year and hasn’t been picked off more than eight times in any single season since 2010.

“You always try to coach in terms of what a quarterback’s progression is and where he puts his eyes,” LaFleur said. “But there’s certain things that he does that it is very, very hard to coach, certain little subtleties that he sees that nobody else sees. And it’s interesting sometimes when you’re watching the tape and you’re like, ‘How the heck did you see that?’ “

Rodgers already has exceeded his touchdown total from last year, when he threw for 4,002 yards and 26 touchdowns in LaFleur’s first season. Rodgers has praised what he calls the “subtle simplicity” that LaFleur has brought to the offense this year as the Packers have averaged 31.7 points, up from 23.5 last season.

“You see everything more in sync and in rhythm,” Eagles coach Doug Pederson said. “Aaron obviously has a great command of the offense and everything runs through him and how he controls things, and that’s kind of what you see in games and on tape – just how smooth things are operating and Aaron really kind of thinking the same way the play caller’s thinking.”

Rodgers’ banner year has followed an offseason that focused on how much longer he might play in Green Bay after the Packers traded up four spots to take Utah State quarterback Jordan Love with the 26th overall pick in the draft. He has taken the attention away from his future and brought it back to the present as Rodgers chases a second Super Bowl berth at the place where he’s spent his entire 16-year NFL career.

“I’ve really enjoyed all the special moments here, so many of them,” Rodgers said. “And like I said, I just feel really fortunate to have grown up here and just have a lot of great memories that I’ve made here that I’ll take with me one day. Hopefully that day isn’t too soon, but if you had told that 21-year-old he’d still be sitting here at 37, I’d be pretty happy about that, as happy as I am today to still be here.”