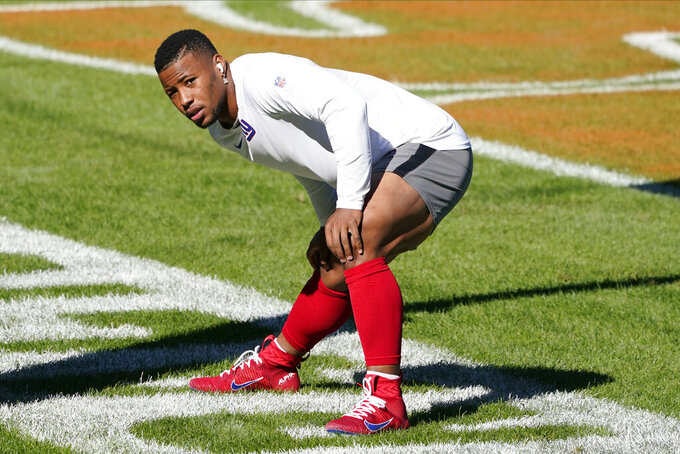 FILE - New York Giants running back Saquon Barkley warms up before an NFL football game against the Chicago Bears in Chicago, in this Sunday, Sept. 20, 2020, file photo. Saquon Barkley says his surgically repaired knee is doing well, though the New York Giants star running back won’t set a target date for his return. Barkley, the 2018 NFL Offensive Rookie of the Year, tore his right ACL in Week 2 and missed the rest of the 2020 season. (AP Photo/Charles Rex Arbogast)

Saquon Barkley says his surgically repaired knee is doing well, though the New York Giants star running back won’t set a target date for his return.

Barkley, the 2018 NFL Offensive Rookie of the Year, tore his right ACL in Week 2 and missed the rest of the 2020 season. The Giants finished 6-10, one win short of winning the dreadful NFC East.

“I’m doing really well in rehab,” Barkley said on the AP Pro Football Podcast. “Very lucky to have a great team around me, great trainers, great doctors. Everyone has been very beneficial to me and very helpful to me. So whenever the opportunity I’m able to get back on the football field with my team, I’m definitely going to cherish that moment and I just honestly can’t wait for that day to happen soon.”

Most players return from ACL injuries after around 10 months or fewer, so Barkley should be ready for Week 1 unless he suffers a setback.

“You have to start all over and you have to teach yourself how to walk, jog, run, sprint, cut and all that stuff again,” Barkley said. “But the mental part, especially when I hurt myself, at the moment I felt I was letting all my teammates down. To watch those guys on Sundays was very emotional. But everything happens for a reason. I have to continue to work. You control the things I can control and let the rest take over.”

Barkley, the No. 2 overall pick in 2018, ran for 1,307 yards that season and caught 91 passes for 721 yards. He had 15 touchdowns combined rushing and receiving. Barkley had 1,441 yards from scrimmage in 2019 but missed three games because of a high ankle sprain.

He is eager to get back running behind a revamped offensive line, which improved down the stretch last season. The unit finished with two rookies on the left side in left tackle Andrew Thomas and left guard Shane Lemieux. Thomas overcame early struggles against outstanding players and played well. Nick Gates played center for the first time in his career and guard Kevin Zeitler and tackle Cam Fleming were the veterans on the right side.

“Very excited,” Barkley said. “Obviously things were a little shaky in the beginning of the year. ... I got hurt, they started getting things clicking and I think you saw when we got the running game going, we were very hard to beat. When you have a great running game, a great defense and a great quarterback and talent all around, which I believe we have, we can take that middle portion toward the end of the season when we played some of our best ball and start off with that, I think we’re going to be in a very good place.”

Barkley said his initial impression of first-year coach Joe Judge, who previously was a Patriots special teams coordinator, changed after he had a chance to get to know him.

“When he came in and gave his speech, he let everyone know he was about business,” Barkley said. “When I first met him, I couldn’t stop looking at his eyes. It was like I was talking to a sergeant. And through time when you got to see him, he got to show his personality, even through Zoom. ...

“When I got hurt, I was trying to be this tough guy and stay strong in the locker room. And then I kind of started breaking down in front of him. He looked me in the eye and told me, ‘It’s going to be one hell of a story.’ And that’s the type of guy he is. He’s got your back and he’s a guy that’s for his players and he’s a guy who is going to push you and get the best out of you no matter what.”

Judge had a rule where players who messed up in practice had to run laps afterward. Barkley said there was a day where he didn’t get caught making a mistake but he ran laps after practice on his own.

“I’m just a big believer in buying in,” Barkley said. “That’s the only way it’s going to work. It’s not going to work if we don’t buy and the culture won’t work. And I think he came in and established a culture. And for me, being one of the leaders, I try to buy in as best as I can.”