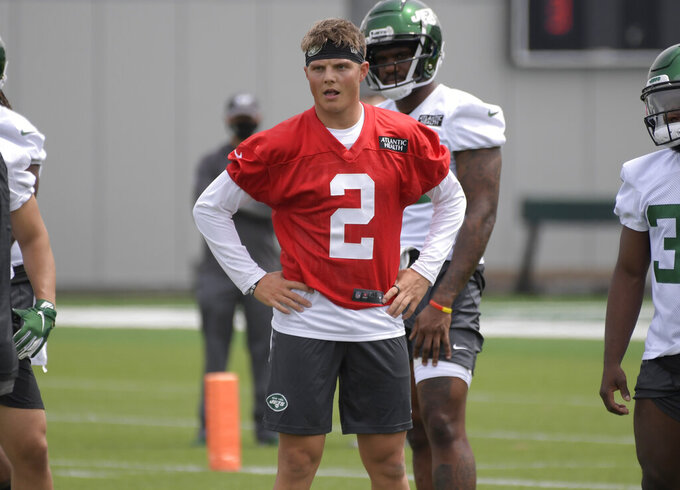 NEW YORK (AP) — Zach Wilson has been busy working the phones in his first week-plus as the newest quarterback of the New York Jets.

Calls, video chats, texts and social media messages have all been part of the playbook for the No. 2 overall draft pick, who is wasting no time making a good first impression on his new teammates.

“Talking to him on the phone, I could tell he's like a general just by what he was saying,” said wide receiver Elijah Moore, the Jets' second-round selection. “He's super excited to be here as well. His passion comes out through the phone.”

The 21-year-old Wilson understands the task at hand and fully embraces it. He's the blond, blue-eyed face of a franchise thirsting for a return to respectability.

“He wants to get to know us,” said guard Alijah Vera-Tucker, the No. 14 overall pick. "Bring us all in and turn this organization around.”

The Jets have the NFL's longest active playoff drought at 10 seasons — and their search for a consistently successful quarterback has lasted decades.

Many might see Wilson as a savior. The former BYU star is taking things one step at a time, and for now that means establishing quick rapports with his teammates and coaches.

“I feel like that connection with your guys is super important,” Wilson said Saturday before his second rookie minicamp practice. “There's still more guys I want to reach out to, get to know.”

“It shows these guys care and they want to win and they want to do everything they can,” said Wilson, who plans to organize a get-together for the players in the offseason. “It's been exciting to get to know all these guys by name and start to find the similarities we have.”

While Wilson can't work with veterans until later this month, he is getting plenty of time with the rookies this weekend.

“I’m ready to put this helmet on," Moore said with a smile, "and I’m just ready to watch him look pretty throwing me balls.”

Coach Robert Saleh made it clear to Wilson during a call moments after the Jets selected him last week that it will be the responsibility of the entire team to lift him up — and his teammates — and not the other way around.

He has reiterated that to Wilson while also recognizing that all eyes will be on the quarterback from here on out. Saleh thinks Wilson has some innate qualities that will allow him to handle that spotlight and thrive in it.

Saleh has split rookie camp practices into sessions, with offensive and defensive linemen taking the field in the mornings and skill players going in the afternoons. So, it's a low-key approach as the players acclimate to life in the NFL.

As for Wilson, his practice debut on Friday received positive reviews from Saleh.

“He did a really nice job," the coach said. "The ball got in and out of his hands very crisp. He was in rhythm, he was on time. Players were running the right routes. The ball was barely on the ground, so it was a very, very good first day for him. Now he's just got to stack it up and get better every day.”

That's the priority for Wilson, who is digging into offensive coordinator Mike LaFleur's playbook to grasp every aspect.

“The littlest details," he said, "are what make the biggest difference.”

It would seem a foregone conclusion that Wilson will be the starter in the Jets' season opener in September, especially with no veteran quarterbacks on the roster right now. But he refuses to assume anything, not with so much work ahead of him.

“Obviously, that's important, but that's not my focus right now,” Wilson said. “My focus is to learn the offense, keep getting better every single day and do what I can with the guys around me. And I think the rest takes care of itself.

"That position has to be earned.”

NOTES: Wilson has been wearing the No. 2 during rookie camp and acknowledged he'll “most likely” stick with that jersey number, although he's still thinking about it. He wore No. 1 at BYU. ... Saleh said he spoke to S Marcus Maye, who signed his franchise tag a few weeks ago, before the offseason program began and hopes a long-term contract "happens soon." Saleh added the front office is “working relentlessly” to make that happen. The sides have until July 15 to work out a deal or Maye will play out this year on the tag and become a free agent after the season.