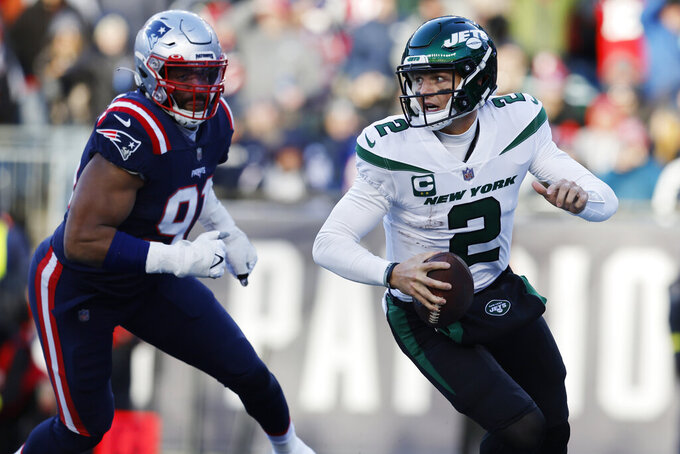 Zach Wilson found out wins and losses aren’t the only stat that matters.

The New York Jets benched Wilson this week despite his 5-2 record as a starter. Wilson, the No. 2 overall pick in 2021, has struggled in his sophomore year. He has the NFL’s second-worst passer rating and was awful in a 10-3 loss at New England on Sunday.

The 23-year-old Wilson then failed to take accountability after the game.

The Carolina Panthers and Houston Texans are also switching QBs but they have nothing to lose. Both teams are heading nowhere. Sam Darnold replaces Baker Mayfield in Carolina. Kyle Allen is expected to take over for Davis Mills in Houston.

The Panthers (3-8) and Texans (1-8-1) should be in a prime spot to draft a potential franchise QB next April.

The Jets (6-4) are in a different position. Wilson is supposed to be their guy after Darnold wasn’t. They have a shot for their first winning season since 2015 and first playoff appearance since 2010.

But New York has been winning in spite of Wilson, not because of him. Plus, leadership counts.

Wilson has completed just 55.6% of his passes with four touchdowns and five interceptions in seven games since returning from a knee injury that forced him to miss the first three games.

Wilson won’t even dress Sunday against the Chicago Bears. Joe Flacco will be Mike White’s backup while Wilson gets to “reset,” according to Jets coach Robert Saleh.

“We haven’t wavered in our belief that he’s going to be the future of this franchise,” Saleh said about Wilson. “Is it a small step back? Absolutely for him. But do I think it’s going to be a great leap forward when he does get a chance to rest himself? Absolutely.

“This is not putting a nail in his coffin. This is not that, this is not anything close to that. But I do believe at the end of this he is going to be a rejuvenated, renewed young man that once he reconnects to all the different things we’re trying to reconnect to – he’s going to show why he was the second pick.”

Saleh is taking a risk. If White plays well and the Jets win, he can’t go back to Wilson right away. He has to wait.

The Jets have two difficult road games coming up after the Bears. They face the Vikings (9-2) and Bills (8-3) so perhaps Wilson comes back for Buffalo. He had his best game against the Bills earlier this month, completing 72% of his passes for 154 yards, one TD and a 101.1 passer rating.

The Commanders are sticking with Taylor Heinicke, who has led them to a 4-1 record since Carson Wentz broke his finger. Wentz returned to practice this week but is expected to be inactive for Sunday’s game against Atlanta. Rookie Sam Howell will continue to serve as the backup for Washington (6-5).

Heinicke has similar numbers to Wilson but he’s been lauded for the team’s resurgence. Heinicke has completed 60.8% of his passes with five TDs, four picks and an 81.8 passer rating. Wilson’s QBR is 44.9 while Heinicke’s is 46.5. The Commanders aren’t winning because of Heinicke; they’re winning with him. Washington’s running game has improved and the defense has played well.

“It’s been the play of the defense some, it’s been the play of the guys up front on the offensive line,” Commanders coach Ron Rivera said. “It’s been some of the play on some individuals that have just done some really good things and just kind of everything’s been coming together and heading in the right direction. I mean, there’s a lot of things to point to. Is there one specific thing? I don’t think so.”

Wentz was inconsistent in his six starts, throwing 10 TDs and six picks with an 84.1 passer rating and 32.8 QBR.

The Commanders have more incentive to keep Wentz on the sideline for at least another game. They would owe the Colts a second-round pick instead of a third-rounder if Wentz plays at least 70% of Washington’s offensive snaps in 2022.

If Washington keeps winning, there’s no reason to sit Heinicke.

After all, it’s usually all about winning.