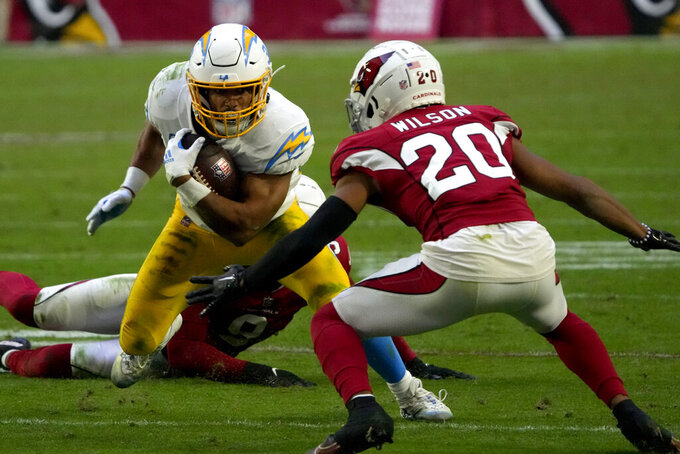 LAS VEGAS (AP) — When the Los Angeles Chargers last came to Las Vegas, a tie would have put them and the Raiders in the playoffs.

Both teams looked as though they were heading there together in overtime last January — before the Raiders decided to go alone with a 47-yard field goal as time expired.

Now the Chargers are back to play the Raiders on Sunday, and only one team appears to be playoff contention. Los Angeles (6-5) is just outside the postseason picture. The Cincinnati Bengals and New York Jets, each 7-4, are just inside.

That's not the case for Las Vegas, which at 4-7 is trying to work its way to .500 after consecutive overtime road victories.

“You look closer to that record and how the games have actually been played, I think they’ve lost six games by one score,” Chargers coach Brandon Staley said. "You know that this is a dangerous team from the first time we played them, and they’re still a dangerous team.”

The Chargers won the first meeting 24-19 in the season opener after holding off a late Raiders rally. Los Angeles has since dealt with injuries to players such as linebacker Joey Bosa and wide receiver Mike Williams, and the Raiders underperformed expectations.

“The depth of their roster has really been challenged, and they’ve used a lot of people,” Raiders coach Josh McDaniels said of the Chargers. “They’ve gone in there and played good football. I don’t say it’s a completely different team, but there are some changes from the first time we played them three months ago to now.

"So a lot of our focus is going to be on just getting familiar with the people that we’re going to be lined up against, which is a little different than the first game."

The Chargers have allowed at least 157 rushing yards in five straight games and six 100-yard rushers on the season. It doesn’t get any easier this week with Josh Jacobs.

The fourth-year running back has only one 100-yard game in six meetings, but that came in last year’s Week 18 overtime thriller in Las Vegas.

Jacobs rushed for 57 yards in the Week 1 meeting, but averaged 5.7 yards per carry. The Chargers are giving up 5.44 yards per carry, which is the highest a team has allowed in its first 11 games since the merger.

“They know how to run the ball. They have an identity. They have tight ends who can block, which makes the running game go a lot better,” Staley said. “You can’t block everything perfectly, you have to have running backs that can create on their own. Josh is as good as anybody at that because he can make you miss and he can run through you. He’s a very dangerous player. They’ve really established a consistency in that phase.”

Justin Herbert hasn’t had a 300-yard passing game since Week 4 at Houston, but the passing attack is beginning to show signs of progress with Keenan Allen in the lineup the past two games.

Allen has 10 catches for 143 yards and a touchdown since returning from a hamstring injury that caused him to miss seven of the first nine games. Allen originally sustained the injury during the first half against the Raiders on Sept. 11.

Williams is dealing with an ankle injury, which has prevented the Chargers from going downfield consistently. But Herbert is being able to throw more on intermediate 10- to 20-yard routes since Allen’s return compared to mainly checking it down near the line of scrimmage, which was the case for two games when both Allen and Williams were out of the lineup.

Running back Austin Ekeler continues to be a scoring threat with 12 touchdowns, including five receiving. He is also Herbert’s most-trusted target with 80 receptions, the most by a running back through 11 games in NFL history.

NOT FRIENDS THIS WEEK

Mack has bragging rights in their relationship after sacking Carr three times in the opener.

“At the end the day, we’re friends,” Carr said. “We’ll be friends forever. He’s one of my favorite teammates I’ve ever had, one of my closest friends have ever had playing football.

"Not this week, obviously.”

The Chargers’ special teams, which has made huge strides under coach Ryan Ficken.

Despite having to use three kickers, Los Angeles has made 18 straight field goals. The punt coverage unit has also allowed a league-low 3.9 yards per return.