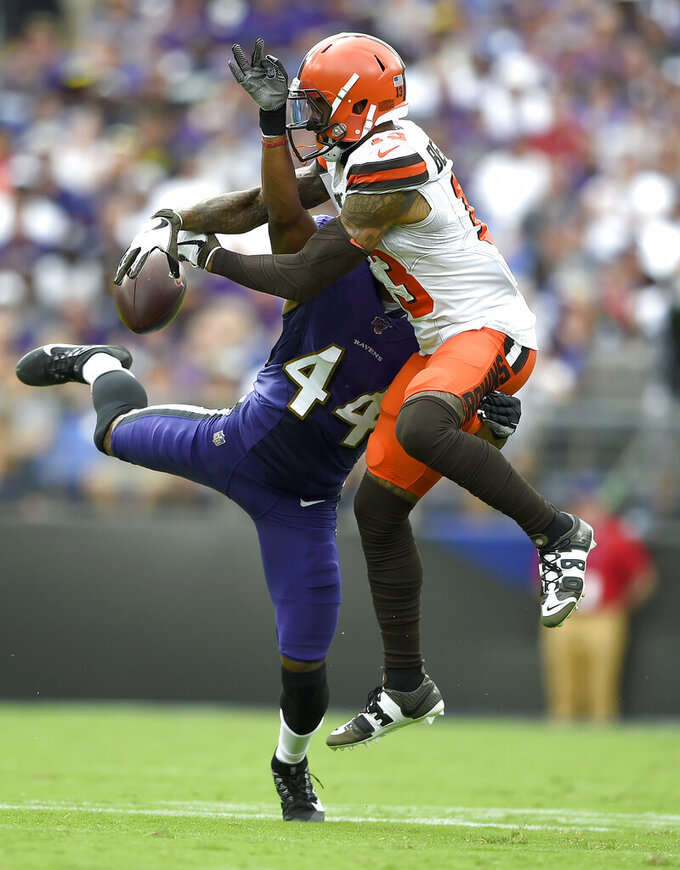 Kitchens said Monday that he wishes the league's officials were more consistent calling penalties in the aftermath of Beckham being choked by Ravens cornerback Marlon Humphrey during Cleveland's 40-25 win on Sunday.

Beckham got into a heated fight with Humphrey, who pinned the three-time Pro Bowler to the ground and had his hands around his throat before being pulled away.

Both players were assessed personal fouls, but neither was ejected. Kitchens felt Humphrey should have been thrown out, but Shawn Hochuli said the actions didn't rise to the level of a "disqualifying foul."

"Here's my big deal with that: I just want to have consistency on how we're going to deal with things, OK?" Kitchens said during a conference call. "I don't like seeing our player on the field and someone's hands around his throat. I don't like that. I don't think that needs to be in our game and I would be the first to say that if it was our guy doing it.

"And I want everybody held to the same standard. That's all I want."

Following the game, Kitchens indicated he was going to call head of officiating Al Riveron before the Browns flew home from Baltimore. He changed his mind.

"It's against the rules to call before 9 a.m. I want to make it very clear that I did not call last night," Kitchens said. "But we're still in the process of talking through some things with that."

He didn't say if he had spoken with Riveron.

"I don't know what you get fined for and what you don't get fined for so I'm not going to even answer that," he said. "But I can promise you this: Hopefully I'll have a better understanding of what we want it to look like on game day."

Beckham, who has a history of scrapping with defenders, was blocking Humphrey when things got out of control. Humphrey overpowered Beckham and had him in a vulnerable position before others intervened.

Browns center JC Tretter ran to help Beckham and was also penalized on the play.

"I wouldn't change anything I did," Tretter said. "Seeing a teammate pinned down like that, I'm not just going to stand there and let that go on."

Kitchens said Hochuli explained the decision not to eject Humphrey and he credited the officials with not letting things escalate.

"Shawn and those guys did an excellent job of maintaining control of the football game," he said. "They did do that. They did an excellent job of that. So my hat's off to them in that scenario, because that can get out of hand in a hurry. And I'll compliment our players on maintaining their composure in that situation. But again, one of their teammates was on the ground too, so we just need to decide what direction we want to go with that, you know?

"I don't like seeing our guys on the ground getting choked."

Ravens coach John Harbaugh wasn't nearly as opinionated on the matter as Kitchens.

Harbaugh didn't condone Humphrey's behavior, but he didn't condemn it either.

"I don't know about an ejection," Harbaugh said. "I just try to focus on what I'm going to say to our player, because you can't control the way the officials see it. I'm not exactly sure why (Humphrey) got the foul, but I'm sure they'll tell us what they thought they saw. Based on the close up that we have of the footage that we had, (Humphrey) pinned him on the ground after about three or four things happened. And I don't want to alleviate him from any responsibility, because we can't get flags in that situation.