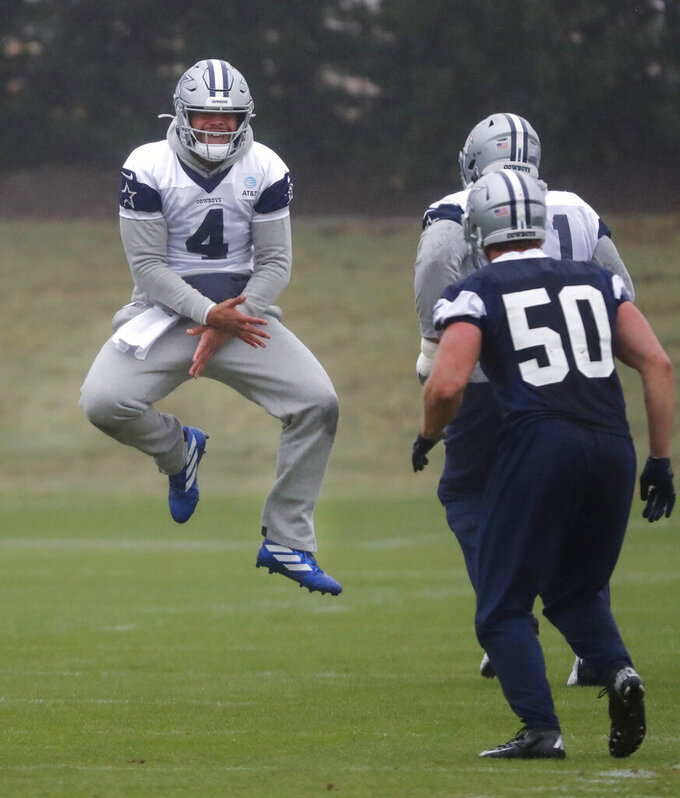 EAST RUTHERFORD, N.J. (AP) — It's easy to assume games between Dallas and the Giants are going to be a running backs' showcase featuring Ezekiel Elliott of the Cowboys and Saquon Barkley of New York.

What's interesting is Barkley and Elliott haven't been the stars in the past three games between the NFC East rivals.

It's been Cowboys quarterback Dak Prescott, and he will get another chance at having his way with the Giants when the teams play on Monday night at MetLife Stadium.

The division-leading Cowboys (4-3) are coming off a bye week, while the Giants (2-6) will be looking to snap a four-game losing streak.

The Cowboys have owned the Giants in recent seasons, winning five straight, including a 35-17 victory in Dallas in the season opener.

Prescott has been phenomenal in the past three. He is 68 of 101 for 1,053 yards, nine touchdowns and no interceptions.

"Ouch," Giants coach Pat Shurmur said after hearing the statistics. "He's a really good player. That's something that we have to get fixed this week when we play them. He's an outstanding player. He has outstanding players around him. He has people that will block for him. Oh by the way, when it breaks down, he can run. So, he's a challenge."

The Cowboys also are facing a challenge, going against rookie quarterback Daniel Jones in his first start against Dallas. He played some in the opener in finishing up for Eli Manning.

"It's pretty cool to go against somebody that you didn't go against before," Cowboys defensive end DeMarcus Lawrence said. "He can move around. He's got a strong arm. He's athletic. He can be good in this league, but he's also got to play against us twice a year."

A trade for a defensive lineman has again raised the question for the Cowboys of how a player will handle protesting during the national anthem. When the issue flared two years ago, Jerry Jones was the first owner to say he would bench any player who protested during the anthem. Players have kneeled, sat and raised fists during "The Star-Spangled Banner" to protest police brutality, social injustice and racial inequality.

The first test was Robert Quinn, who was acquired in the offseason. The defensive end had raised a fist during the anthem when he was with the Dolphins and Rams. Quinn was vague about what he would do anytime the question came up, and he has not protested so far.

Now it's Michael Bennett, acquired during the open week from New England for a conditional late-round pick in the 2021 draft and set for his Dallas debut against the Giants. He stayed in the locker room with Philadelphia and the Patriots. Coach Jason Garrett said he didn't anticipate it being an issue. "There's one thing," Quinn said this week. "It's called freedom of speech."

The Giants have been showing up 15 minutes late during their skid. They have been outscored 38-0 in the four games, including 14-0 by both Arizona and Detroit in the past two games. There have been too many mistakes. Jones had a lateral returned for a touchdown by the Lions early and a first-quarter interception the week before led to a Cardinals' TD. The Patriots got an early touchdown on a blocked punt.

The Giants got help earlier this week, acquiring defensive end Leonard Williams from the Jets for two draft picks. The sixth pick overall in 2015 has 17 sacks and 240 tackles in his four-plus years. New York uses a 3-4 defensive alignment. The Jets employ a 4-3 front that had Williams working mostly on the inside. He can play nose tackle, too. Watch to see what the Giants do.

NO WORSE FOR THE WEAR

Dallas linebacker Leighton Vander Esch and Quinn appeared to come through OK after potentially serious injuries in the victory over Philadelphia two weeks ago. Vander Esch sustained neck injury early against the Eagles, and Quinn went out with a rib injury not long after. "I think they're doing better," Garrett said.

This might be the first time Jones has all his skill players. WR Sterling Shepard looks ready to return after sitting out two games with his second concussion. TE Evan Engram is healthy. WR Golden Tate has played in four straight after returning from a suspension for using performance-enhancers. Barkley will be playing in his third straight after sitting out three with an ankle injury.