End game: Browns star Garrett off to dominant start in 2020 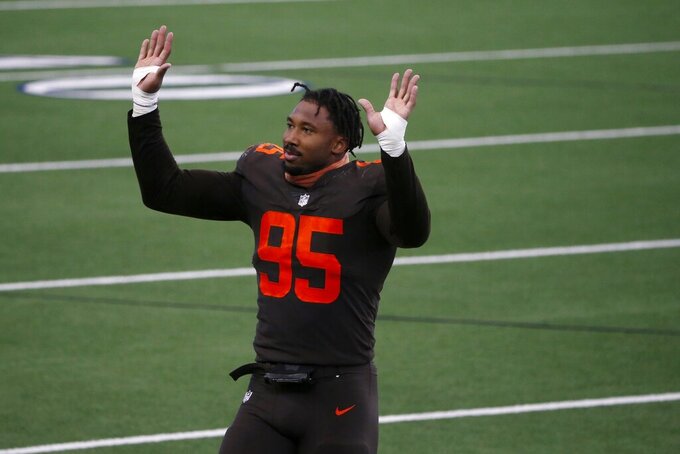 CLEVELAND (AP) — Myles Garrett shrugged off his latest award with the same ease he shows when blasting past a helpless right tackle on his path to the quarterback.

“It is something they should have done already by now," the Browns powerful defensive end said Friday. “But whenever you start picking up traction, just don't lose it. Now I am just trying to keep the momentum."

He's rolling, but Garrett has much loftier goals.

“I want to be the greatest,” he said.

Garrett put on quite a show last week during a homecoming game in his hometown of Arlington, Texas. He roughed up the Cowboys and hopes to do the same this week at home against the Indianapolis Colts (3-1).

In Cleveland's 49-38 win over Dallas, Garrett had two sacks — including his third strip sack in three straight games — and spent the afternoon wreaking havoc while pursuing Cowboys quarterback Zak Prescott, who made sure to locate No. 95 every time he broke the huddle.

It's been like that most of the season for Garrett, who is tied for the NFL lead with five sacks and proving to be worth the five-year, $125 million contract extension the Browns signed him to in July.

“I had nine sacks in high school in one game, if that counts,” he said, laughing. “If I do that, then I really hope I get that (AFC Defensive Player of the Week) award.”

If Garrett appears to be on a mission, he is. After being suspended for the last six games in 2019 for striking Steelers quarterback Mason Rudolph in the head with a swung helmet, Garrett is out to prove he's the league's gold standard among edge rushers.

His versatility is a huge luxury for Cleveland's defense, which despite a lengthy list of injuries since training camp opened leads the league with 11 takeaways.

Because of Garrett's unique blend of size, power and speed, defensive coordinator Joe Woods can line him up inside, on the left side or right. He forces double- and triple-teams, necessitates running backs to drop into pass coverage, and is a constant threat.

Woods knows he has a special weapon.

“You have one of those flamethrowers out there, that is what allows you to do certain things in coverage,” said Woods, who was in charge of San Francisco's vaunted D-line last season. "I always try to put Myles in good situations because I feel like if we can get him one on one, I feel like he has a chance to win every time.

"Just what he has done over the last few games, it speaks to the level that he is playing at right now.”

Woods admitted his heart was racing in the late stages of last week's game as the Cowboys trimmed a 27-point deficit to three in the fourth quarter before the Browns put it away on Denzel Ward's late interception. As the Cowboys stormed back, Woods said one thought kept crossing his mind: Come on, 95, make a play.

“That was the plan the whole way,” Woods said, smiling. "A big part of me calling things a certain way is based on how we are rushing up front. When you have Myles, you feel like if you can make (the quarterback) hold it for a second, then he will get it.”

Garrett appreciates that Woods has the confidence in him to come up with the big play.

“I am glad he has his faith in me, if he is calling on me to make a play,” he said. “I am trying to answer that call every time I go out on the field. Not just down the stretch, it is every time, and it is hard.”

The Cowboys threw everything they had at Garrett, who forced Dallas to bench the starting right tackle during the game because he was being dominated.

Garrett said where he lines up is a group decision: Cleveland's coaches often ask his preference, and sometimes it's his call.

“It just depends,” he said. "Usually, I will get the call that I am supposed to go somewhere else, but some of the time, I get to pick and choose who I get to attack.”

If he keeps it up, he'll have his choice of awards too.