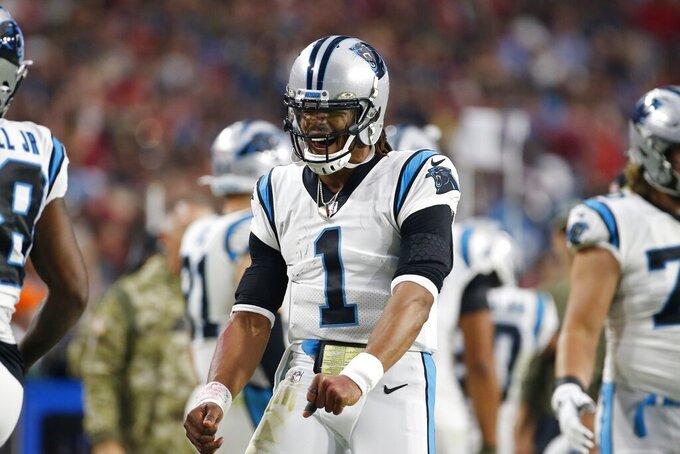 Carolina Panthers quarterback Cam Newton celebrates after a Panthers touchdown against the Arizona Cardinals during the second half of an NFL football game Sunday, Nov. 14, 2021, in Glendale, Ariz. (AP Photo/Ralph Freso)

With only two teams on byes, it’s a week without a huge need for streaming. For those of us who do need streamers, the options — in theory — should be better than usual.

Tua Tagovailoa fits as a traditional streamer against a New York Jets defense that ranks 32nd in Adjusted Defensive Passing Net Expected Points (NEP) per play allowed. Tua, in three games against defenses ranked outside the top 20 in adjusted pass defense, has averaged 21.1 fantasy points per game by way of 259.3 yards and 2.0 touchdowns per game.

The simulations are back on Cam Newton, who had a strong goal-line role in Week 10 that led to touchdowns on his first two plays. He’s “trending” toward starting, according to Carolina coach Matt Rhule. He’s a long-term option in addition to a Week 11 streamer.

Joe Burrow has had a pretty easy schedule this year and has faced six pass defenses outside the top 20, via numberFire’s metrics. In these games, Burrow has averaged 19.6 fantasy points, stemming from 297.2 yards per game and 2.2 passing touchdowns. He gets another easy matchup this week: the Las Vegas Raiders are 25th.

Derek Carr is also in play in that game against the Cincinnati Bengals, who are stingier against the run (seventh by numberFire’s metrics) than against the pass (20th). Notably, he has still gotten to 278.5 yards and 1.5 touchdowns per game in his past two (without Henry Ruggs) albeit with worrisome passing efficiency. He’s not a top priority, but is in the conversation if needed.

The simulations definitely don’t treat Russell Wilson as a must-start. He struggled mightily in his Week 10 return. Wilson generated only 161 yards on 43 drop backs. His Passing NEP per drop back of -0.38 was abysmal (NFL average is 0.11). The Arizona Cardinals are third in adjusted pass defense, as well.

Since 2012, quarterbacks facing divisional opponents that are also top-six adjusted pass defenses have thrown for 300 yards in just 18% of their games (compared to a full-sample average of 26%).

Bench if possible: These quarterbacks are under 35% likely (19th or worse) to net a top-12 result and likely aren’t in the one-quarterback-league conversation.

We see 16 running backs tagged with at least a 60% chance to finish as a top-24 performer this week. Again, it’s a light bye week, and the state of running backs is pretty solid overall with Christian McCaffrey back and Leonard Fournette, James Conner, Michael Carter, A.J. Dillon, and Myles Gaskin no longer mired in total committees for one reason or another. That leaves little room for the next tier to get into the top 24 at a consistent rate within the slate simulations.

David Montgomery wouldn’t have surprised me if he had made it into the upper crust of the sims. He returned in Week 9 to play on 84.5% of the Chicago Bears’ snaps and handle 13 of 17 running back carries and 2 of 2 running back targets. The main concern here would be the matchup against the Baltimore Ravens, which profiles to be extremely run-heavy. That can grind clock and reduce plays. However, after the elite role in Week 9 and a bye week to get healthier, Montgomery is not someone to bench because of the matchup unless you are flush at running back.

(asterisk) Mark Ingram’s RB1 status might have been short-lived, as Alvin Kamara returned to practice in a limited fashion on Wednesday. Overall, if Kamara plays, you’ll be playing him. Even at a half projection, Kamara and Ingram are in the RB2/FLEX tier.

(asterisk)(asterisk) We could get replacement-level production from Wayne Gallman and Mike Davis, as Cordarrelle Patterson is unlikely to play. We’ll know early in the week, as the Atlanta Falcons play the New England Patriots on Thursday to kick off Week 11.

(asterisk)(asterisk)(asterisk) If you added Rhamondre Stevenson within the past two weeks or if you’re awaiting for Damien Harris' return, you’ll find out Thursday, which helps for lineup preparation. Similar to the New Orleans Saints’ backs the simulations like both backs even at half projection well enough to consider unless we’re flush with running backs at the top tier. The Atlanta Falcons rank 22nd in rushing success rate allowed to running backs.

There’s a big tier for Week 11 of start-able receivers who are under 50% to finish as a top-24 wideout. With few byes, we don’t have to get too cute, so our start/sit decisions will come down to stronger options than usual. This also led to a change of the usual cutoff of 40%.

From Week 5 onward to help account for Tee Higgins’ return and Ja’Marr Chase’s breakout, we still see Higgins accrue 23.7% of the Cincinnati Bengals’ targets while clearing 100 air yards per game. The game against the Las Vegas Raiders profiles as a back-and-forth shootout. The total is 50.0 points, and the spread is only 1.0 points in favor of the Bengals, via FanDuel Sportsbook.

Michael Pittman Jr. has a tough matchup this week. The Buffalo Bills are numberFire’s second-ranked adjusted pass defense overall, and they rank second in adjusted fantasy points per target allowed to opposing receivers. In three games against top-12 adjusted pass defenses, Carson Wentz, Pittman Jr.‘s quarterback, has averaged just 191.7 yards and 1.7 touchdowns with worrisome passing efficiency. But in these games, Pittman Jr. has a 28.2% target share with per-game averages of 10.3 targets, 6.7 catches, 86.3 yards and 1.0 touchdowns.

Start with confidence: These guys are the Big Six now.

With six of the slots inside the will-be top 12 considered more-likely-than-not accounted for, we see a pretty fast drop for the rest of the tight ends in top-12 odds.

Dalton Schultz is part of the game of the week against the Kansas City Chiefs, who rank last in the NFL in adjusted fantasy points per target allowed to tight ends. With Michael Gallup back in the lineup last week, Schultz saw just two targets for 14 yards, but still ran 25 routes (71.4%) in a lopsided win. We don’t have to bail on Schultz yet, as this game shouldn’t be a blowout on either side.

Pat Freiermuth remains in play even with Eric Ebron back. Ebron played just 33.3% of the Pittsburgh Steelers’ snaps in Week 10, allowing Freiermuth to play on 61.7% of the snaps. Freiermuth carved out an 18.4% target share while playing alongside Mason Rudolph, who may get the start again this week. The Los Angeles Chargers are stingy against receivers (first in adjusted fantasy points per target), but soft against tight ends (30th).

Since Week 5, Dan Arnold has been a key cog in the Jacksonville Jaguars’ offense. He has averaged 7.4 targets per game (19.8%), targets which are generally close to the line of scrimmage (his average depth of target is 6.3 yards). Despite this, few tight ends have such a strong role; he’s eighth in target market share among the position since Week 5.