Giving big-money to quarterbacks guarantees nothing 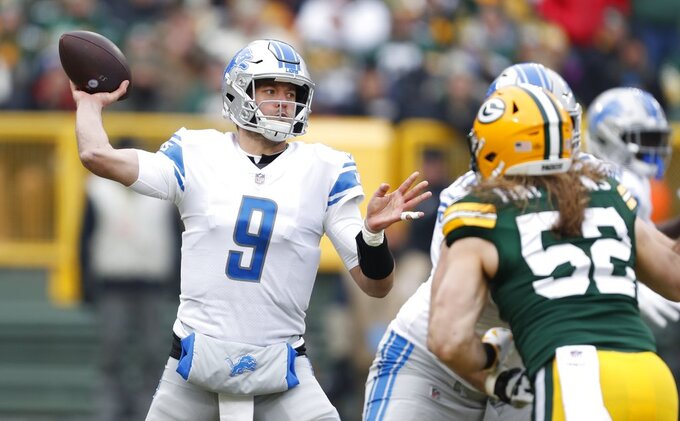 Only Cousins had a winning record (8-7-1), and he failed in a do-or-die game in the regular-season finale. Cousins, who received a three-year, fully guaranteed, $84 million contract, struggled in a 24-10 loss to the Chicago Bears that eliminated the Vikings.

Of the top six on the salary list, only Rodgers has won a Super Bowl. Ryan is 4-6 in the playoffs, Stafford is 0-3 and Cousins is 0-1. Carr and Garoppolo haven't made a postseason start.

Among the 12 starting quarterbacks still playing, six are still under their rookie contract and another — Nick Foles — is a backup.

SETTING RECORDS: New Orleans quarterback Drew Brees broke his own record with a 74.4 completion percentage, the highest in a season in NFL history. ... Philadelphia's Zach Ertz set a record for most receptions by a tight end (116). ... San Francisco's George Kittle set a record for most yards receiving by a tight end (1,377). ... Teams combined to score 1,371 total touchdowns, the highest total in a season. ... Eight quarterbacks had a passer rating of 100 or higher, most in a season.

WORST TO FIRST: The Bears (12-4) and Texans (11-5) won their divisions after finishing in last place in 2017. The Eagles won the Super Bowl last year after going worst-to-first in the NFC East.

THE NEWCOMERS: Seven teams who weren't in the playoffs last season qualified this year. All seven — Baltimore, Chicago, Dallas, Houston, Indianapolis, the Los Angeles Chargers and Seattle — will play this weekend. Since the 12-team playoff format was adopted in 1990, at least four teams have qualified for the playoffs in every season that were not in the postseason the previous year.

TOUGHEST ROAD: The Eagles and Colts are each trying to become only the third No. 6 seed to win a Super Bowl, joining the 2005 Steelers and 2010 Packers.

STINGY DEFENSE: In three of the past four seasons, the teams with the stringiest regular-season scoring defense have advanced to the Super Bowl. The Bears led the league with the fewest points allowed per game (17.7) this season.