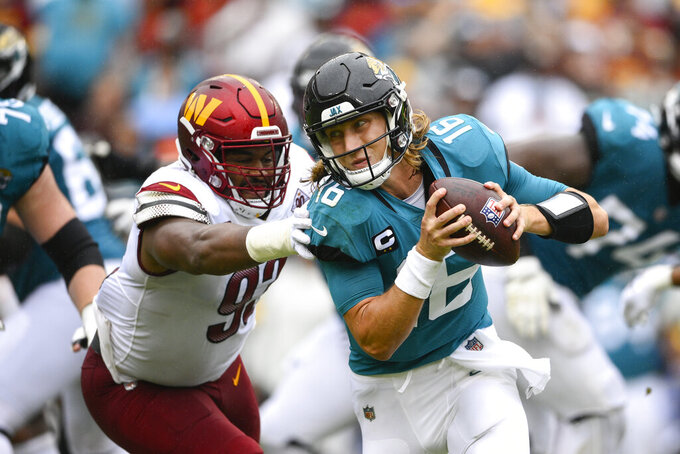 The Jaguars roared back Sunday from a deficit before allowing two late touchdown drives to the Washington Commanders. For a team that lost 29 of 33 games the previous two seasons, losing a winnable game showed what could be the start of a turnaround.

“We beat ourselves,” Pederson said. “Some costly mistakes at the wrong time. Games come down to three to five plays every week, and we got to finish better.”

Had the Jaguars finished what should have been an easy pitch and catch from Trevor Lawrence to former Clemson teammate Travis Etienne, or converted on fourth and goal from the 3, or had kicker Riley Patterson not doinked a 37-yard field goal attempt off the right upright, the Jaguars could have pounced on some Washington mistakes and changed the course of the game.

Instead, Lawrence forced a throw with just over a minute left that was intercepted, and he and his teammates were left to lament — again — what went wrong.

“We’re frustrated, obviously, because we’re good enough to win that game and we should win that game,” Lawrence said. “We spotted them 11 points in the first half and still found a way to fight back and have a chance to win. If we can clean up all that, we will be fine.”

There were still plenty of things to clean up, including 13 penalties adding up to 90 yards, Lawrence taking two sacks and two intentional grounding penalties and defensive coverage breakdowns on fourth-quarter touchdown passes by Washington's Carson Wentz that made up for his two interceptions.

“That’s just what I’m talking about," Pederson said. "It’s the finish, finish, finish of the game: Finish a play, finish a series, finish a drive. Those are all teachable moments, and that’s what we are going to do as a staff. We’re going to teach these guys and we’re going to show them exactly how to do that.”

Etienne, a 2021 first-round pick who was making his debut after missing all of last season with a foot injury, dropped a pass while wide open on the fourth-down play deep in Commanders territory. That, and Lawrence's overthrow in the end zone, overshadowed Etienne's 47 yards rushing and 18 more receiving.

“We missed two in the red zone,” Lawrence said. “The one to Travis, I just overshot him a little bit. He did a really good job, and he won his route. It’s on me. It’s on all of us.”

The Jaguars extended their NFL-record streak of losses to NFC opponents to 17 and lost on the road for the 18th consecutive game. The NFC skid now spans three coaches: Doug Marrone, Urban Meyer and Pederson, who conceded some nerves starting the new job.

“For me, it was exciting,” he said. “I’d be lying if I said I didn’t have butterflies before the game. It’s just the way I am being competitive.”