Jets' mistake-filled offense needs to get better in hurry 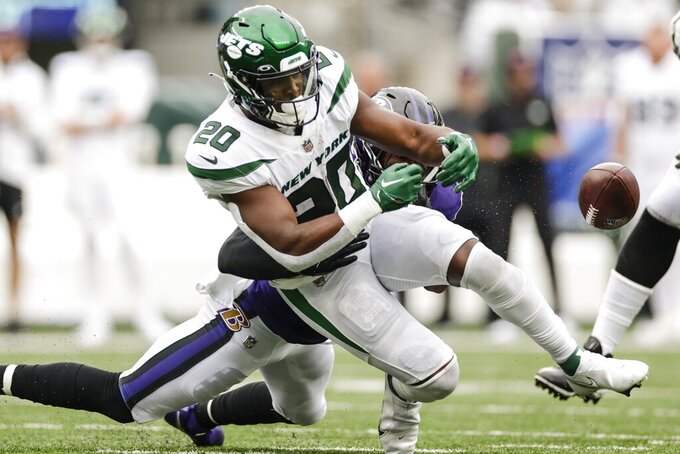 New York Jets running back Breece Hall (20) fumbles the ball during the second half of an NFL football game against the Baltimore Ravens, Sunday, Sept. 11, 2022, in East Rutherford, N.J. Ravens' Marlon Humphrey recovered the ball on the play. (AP Photo/Adam Hunger)

And that was even with Joe Flacco filling in at quarterback and a shuffled line dealing with injuries.

Well, it took just one game for the positive vibes to turn to panic for some Jets fans.

A mistake-filled performance, especially on offense, led to a 24-9 loss to the Baltimore Ravens on Sunday.

“In my opinion, we did not get beat. We lost," Saleh said Monday. "Those are two totally different things.”

The 37-year-old Flacco — filling in for the injured Zach Wilson — took the brunt of the criticism from fans and some media after the game, mainly for not being able to lift an offense that needed a spark. And that's despite throwing the ball a whopping 59 times. But time and time again, mistakes detonated drives — and it wasn't just the quarterback.

Flacco said the offense just couldn’t get into a rhythm, and there were plenty of reasons why. There was an interception when the intended receiver slipped on the wet MetLife Stadium turf. There was a fumble, including one by rookie running back Breece Hall; several dropped passes, including a wide-open Michael Carter in the end zone; costly penalties; and missed opportunities.

Saleh said the coaches were still reviewing film Monday and evaluating all positions, including quarterback.

“As of now, Joe’s our starting quarterback,” Saleh said.

When asked if he’s leaving the door open for perhaps going to Mike White on Sunday at Cleveland, Saleh said it's “more than likely going to be Joe.”

The Jets went 2 of 14 on third-down conversions, failing on their first eight and not getting one until there were 9 minutes left.

“I just think there are some easy things that we left out there early in the game and we just didn’t execute well enough in terms of some of our game-plan stuff that we really thought we’d be able to take advantage of,” Flacco said. “Maybe early on, some of that stuff was taken away and we had to just get down to the easy one a little better than we did in terms of my part.

"It was just a thing here and there.”

Offensive coordinator Mike LaFleur needs to figure out those things in a hurry, especially because that Jets' offense Sunday looked a lot like the versions frustrated Jets fans have seen the last several seasons.

Inept at times. And simply not good enough.

But Saleh insists that will change — and so will the narrative outside the facility.

“It's going to happen, he said. "We’re all taking receipts on all the people who continually mock and say that we ain’t going to do anything.

“I’m taking receipts, and I’m going to be more than happy to share them with all y’all when it’s all said and done.”

The defensive line. Considered the Jets' deepest and best overall unit, it played up to its reputation.

Lamar Jackson was mostly held in check on the ground, running just six times — including two kneeldowns — for 17 yards. The Ravens ended up with just 63 yards rushing overall. The Jets also had two sacks and five quarterback hits, putting consistent pressure on Jackson.

New York did it by keeping the big guys up front fresh, rotating nine players throughout the game. Quinnen Williams led the way, playing 36 of 56 defensive snaps.

The offensive line. It has gone through some shuffling since the summer because of injuries, but it looked porous at times while consistently being unable to protect Flacco or give him enough time to make plays. The offensive line allowed 11 pressures and Flacco was sacked three times.

D.J. Reed. He was signed to a three-year, $33 million contract in March to be a No. 1 cornerback, and he lived up to that in his Jets debut. Reed allowed no catches, forced a fumble and had a late interception that he celebrated at midfield in honor of his late father. Reed told CBS-2 New York that he learned shortly before the game that Dennis Reed Sr. had died.

Greg Zuerlein. The veteran kicker beat out Eddy Pineiro for the job in training camp but struggled in his first game with the Jets. Zuerlein was wide left on a 45-yard field goal attempt — he later made a 45-yarder — and missed an extra point.

“I’m not worried about Z,” Saleh insisted after the game. “Obviously, it wasn’t his best day and I’m very confident that he’ll bounce back just fine.”

Nickel CB Michael Carter II left with what appeared to be a hip injury but later seemed to be OK. Saleh said after the game there were no injuries to report.

13 — That's how many consecutive games the Jets have lost in the month of September, dating to 2018.

The Jets will have two more chances this month to end that ugly skid, starting with a road game at Cleveland next Sunday and then a home game against Cincinnati the following week.