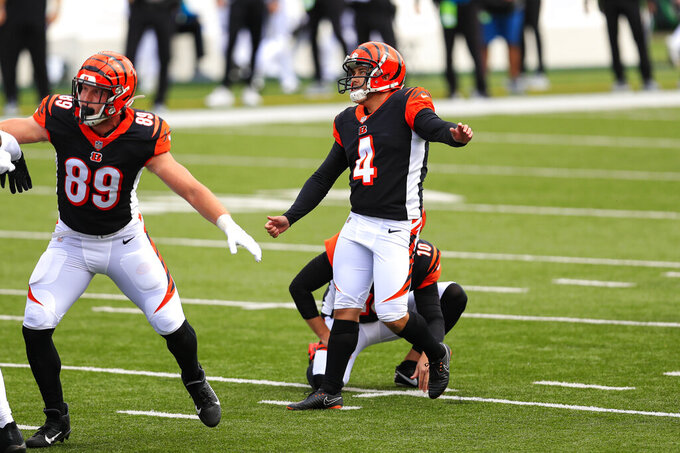 Cincinnati Bengals kicker Randy Bullock (4) kicks a field goal against the Jacksonville Jaguars from the hold of Kevin Huber in the first half of an NFL football game in Cincinnati, Sunday, Oct. 4, 2020. (AP Photo/Aaron Doster)

New England at Kansas City, 7:05 p.m. EDT. The Patriots (2-1) and Chiefs (3-0) were scheduled to square off Sunday, but New England quarterback Cam Newton and Kansas City practice squad quarterback Jordan Ta’amu were added to the COVID-19 reserve list this weekend and the game was moved to Monday night. It’s the fourth straight season the teams will meet, but they're playing at Arrowhead Stadium for the first time in that stretch. As of Sunday night, it was uncertain whether Brian Hoyer or Jarrett Stidham would start at quarterback for the Patriots. Patrick Mahomes and the Chiefs are trying for a 4-0 start for the fourth consecutive year.

Atlanta at Green Bay, 8:50 p.m. EDT. Matt Ryan and the winless Falcons (0-3) head to Lambeau Field to take on Aaron Rodgers and the undefeated Packers (3-0). Atlanta is trying to avoid its first 0-4 start since 1999. The Falcons are also hoping to end a troubling trend: They're the first team to lose twice in a season after leading by at least 15 points in the fourth quarter — doing so in each of their last two games. Meanwhile, Rodgers and the Packers have been rolling along. They're the first team in NFL history to have at least 35 points and no turnovers in each of their first three games.

— Russell Wilson, Seahawks, passed for 360 yards and two TDs to help Seattle Seahawks improve to 4-0 with a 31-23 victory over Miami.

— Dak Prescott, Cowboys, was 41 of 58 for 502 yards and four touchdowns with an interception in a losing cause as Dallas fell to Cincinnati 49-38.

— Josh Allen, Bills, threw for two touchdowns and rushed for another, leading Buffalo to a 30-23 victory at Las Vegas.

— Teddy Bridgewater, Panthers, threw for 276 yards and two touchdowns, and ran for his first score since a devastating knee injury in 2016, helping Carolina top Arizona 31-21.

— Lamar Jackson, Ravens, passed for two scores and ran for a 50-yard touchdown for Baltimore in a 31-17 victory at Washington.

— Joe Mixon, Bengals, ran for 151 yards and two touchdowns and caught a pass from Joe Burrow for another score as Cincinnati rolled past Jacksonville 33-25 for its first win of the season.

— Dalvin Cook, Vikings, rushed for 130 yards and two touchdowns and Minnesota withstood a late rally from winless Houston to get its first victory, 31-23.

— Ronald Jones, Buccaneers, had 111 yards on 20 carries in Tampa Bay's 38-31 victory over the Los Angeles Chargers.

— D'Ernest Johnson and Kareem Hunt, Browns. Johnson ran for a career-high 95 yards on 13 attempts while helping fill in for an injured Nick Chubb, and Hunt had two TD runs in Cleveland's 49-38 win at Dallas.

— Chris Carson, Seahawks, rushed for two scores and finished with 80 yards on 16 carries in Seattle's 31-23 victory at Miami.

— Mike Evans, Buccaneers, had 122 yards receiving and a touchdown on seven catches in Tampa Bay's 38-31 win over the Los Angeles Chargers.

— Odell Beckham Jr., Browns, caught two touchdown passes, including one from fellow receiver Jarvis Landry, and also went 50 yards for a score on a reverse in Cleveland's 49-38 victory at Dallas.

— Adam Thielen, Vikings, made eight catches for 114 yards and a TD to help Minnesota beat Houston 31-23.

— Sam Koch, Ravens, completed a 15-yard pass on a fake punt on fourth-and-9 to set up the first of Lamar Jackson’s two touchdown passes to tight end Mark Andrews in Baltimore's 31-17 win at Washington.

— Jordan Glasgow, Colts, blocked a punt by Pat O’Donnell on Chicago's opening drive and Indianapolis capitalized with a touchdown in a 19-11 victory.

— Jason Sanders, Dolphins, booted five field goals in a losing cause as Miami lost 31-23 to Seattle.

— Darious Williams, Rams, made a diving interception at the Los Angeles 7 with 52 seconds to play that helped preserve a 17-9 victory over the New York Giants.

— Myles Garrett, Browns, had a strip sack for the third straight game, the latest in Cleveland's 49-38 win at Dallas, and finished with two sacks overall.

Dallas' Dak Prescott had his first 500-yard passing game, finishing with 502 in a 49-38 loss to Cleveland, and became the first NFL player to throw for at least 450 yards in three consecutive games. His 1,690 yards passing are the most in a team's first four games in league history, surpassing the 1,557 Kurt Warner had with the Rams in 2000. ... Tampa Bay's Tom Brady had five TD passes in the Buccaneers' 38-31 win over the Los Angeles Chargers, becoming the third QB in NFL history with 30 games of at least four touchdown tosses, joining Drew Brees (36) and Peyton Manning (35). Brady also threw for 369 yards, tying him with Peyton Manning for the second-most games with 300 with 93. ... Buffalo's Josh Allen had his 20th career TD run in the Bills' 30-23 win at Las Vegas, his 32nd career NFL game. He's the second-fastest QB to the 20-TD mark, with only Cam Newton (27 games) reaching the mark faster. ... Cincinnati’s Joe Burrow threw for 300 yards in the Bengals’ 33-25 win over Jacksonville, becoming the first rookie quarterback in NFL history to pass for at least 300 in three consecutive games.

Seattle's Russell Wilson leads the league with 16 touchdown passes, tied with Peyton Manning (2013) for the most through his team’s first four games of a season in NFL history. ... With its 35-29 defeat against New Orleans, Detroit earned the dubious distinction of being the first NFL team to lose six straight games in which it led by double digits, according to the Elias Sports Bureau. The Lions also joined the 2011 Minnesota Vikings as the two teams in league history to lose three of their first four games after leading by at least 10 points. ... Baltimore's Marlon Humphrey forced a fumble in a 31-17 win at Washington, marking the 17th straight game in which the Ravens forced at least one turnover. It's the longest current streak in the NFL. ... Dallas allowed a franchise-record 307 yards rushing in a 49-38 loss to Cleveland and became the first team since the Raiders in 2012 to allow 38 or more points three games in a row in the same season. The only time the Cowboys had done that was during their 0-11-1 debut in 1960.

Teddy Bridgewater threw for 276 yards and two touchdowns, ran for his first score since a devastating knee injury in 2016, and the Carolina Panthers beat the Arizona Cardinals 31-21. Bridgewater scored his first rushing touchdown since Dec. 20, 2015, on an 18-yard scramble, sidestepping several tacklers to reach the end zone and give Carolina a 14-0 lead in the first quarter. It was his first TD rushing since tearing an ACL and suffering a dislocated left kneecap during a training camp practice with the Vikings.

New Orleans fell behind Detroit 14-0 in the first quarter, but then scored 35 straight points to take control in a 35-29 victory. Latavius Murray bookended the surge with touchdown runs of 3 and 6 yards. Alvin Kamara also had a 1-yard TD, and Drew Brees connected with Tre’Quan Smith 2:19 apart in the second quarter to help the Saints overcome the early deficit.

Washington coach Ron Rivera is striving to beat cancer and had plenty of ups and downs Sunday in his team's 31-17 loss to Baltimore. Watching from the sideline took its toll on the coach, who felt alternately strong and a bit weary while trying to guide Washington against one of the best teams in the NFL. The 58-year-old Rivera said there were moments he felt strong and able to walk up and down the sidelines, but he struggled during others. He had to take two bags of IV fluid before the game and would sit down during TV timeouts. During the game, Rivera wore a shirt that said, “RIVERA STRONG.” The players wore the same black shirt during warm-ups as a tribute to their coach and his strong will.

Rams cornerback Jalen Ramsey and Giants wide receiver Golden Tate scuffled at midfield after the final whistle of Los Angeles' 17-9 win over New York after a game filled with trash-talking between the two Nashville-area natives. Ramsey has two young children with Tate’s sister, and Tate was publicly upset last year when the couple went through a nasty public breakup. Ramsey and Tate both walked toward midfield when the game ended, and they immediately took swings at each other, eventually going to the turf in a heap. The veterans’ teammates pulled them apart.

Cleveland running back Nick Chubb injured his right knee in the first quarter of the Browns' 49-38 win at Dallas when his leg was rolled up on by a pair of opposing linemen engaged with each other. He limped to the locker room. Coach Kevin Stefanski said Chubb will have an MRI. He did not know the extent of the injury. ... Los Angeles Chargers running back Austin Ekeler was carted off the field in the first quarter of a 38-31 loss at Tampa Bay with what seemed like a serious hamstring injury. Meanwhile, Buccaneers tight end O.J. Howard was lost to an Achilles tendon injury, while running backs LeSean McCoy (ankle) and Kenjon Barner (concussion) did not finish. ... Jacksonville cornerback CJ Henderson (shoulder), linebacker Myles Jack (ankle), tight end Tyler Eifert (concussion) and cornerback D.J. Hayden (hamstring) all left the Jaguars' 33-25 loss at Cincinnati. The Bengals had receiver A.J. Green leave with a wrist injury.

“How can you not believe in him? He’s the greatest to ever do it. We just go in there and follow his lead.” — Tampa Bay wide receiver Scotty Miller on Tom Brady, who rallied the Buccaneers from a 17-point deficit to beat the Los Angeles Chargers 38-31.

“It means a lot just to see him come fighting. Not just today, but seeing him on Wednesdays, Thursdays and Fridays. It motivates all of us to go out there and keep fighting and never quit.” — Washington cornerback Kendall Fuller on coach Ron Rivera, who is coaching while receiving cancer treatments.