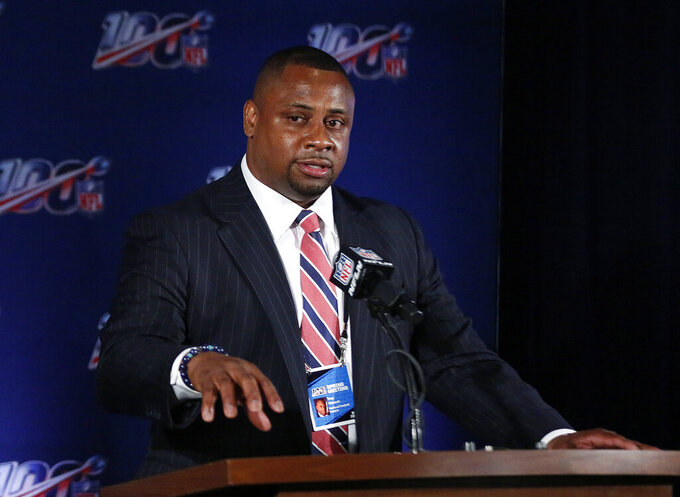 FILE - In this May 22, 2019, file photo, Troy Vincent, NFL executive vice president, speaks to the media during the owners meetings in Key Biscayne, Fla. Vincent, a former Buffalo Bills safety, was honored by the Niagara Frontier YWCA for his extensive work advocating against domestic violence and sexual assault. Vincent was presented with the association's 2019 Hero Award at a banquet in Niagara Falls, N.Y., on Tuesday. (AP Photo/Brynn Anderson, File)

Vincent was presented with the association's 2019 Hero Award at a banquet in Niagara Falls, New York, on Tuesday.

In accepting the honor, Vincent focused his attention on the evening's 22 other award winners.

"I think we heard from all the heroes," he said during a four-minute speech. "The empathy. The humbleness. The meekness. These are the real heroes. I'm just doing my part."

Vincent, the NFL's Walter Payton Man of the Year in 2002 for his off-field work, first captured the local YWCA's attention by speaking at a luncheon a year ago. He now is in charge of the league's football operations and is a former president of the NFL Players Association.

The NFL's Character Playbook program will have reached almost a half-million students in just over three years of existence.

Players across the league have been involved in the digital program that has drawn acclaim from educators everywhere. It is available to all U.S. schools free of charge for the first time.

"Today's headlines and usage of social media are making it more difficult to show, by example, how to live with empathy and compassion," says Suzanne McCormick, the U.S. president of United Way Worldwide. "That's all the more reason we should be deliberate about providing our kids the tools they need to build healthy relationships and make good decisions during their critical and formative middle school years."

Now, the NFL and United Way are also incorporating digital mental health education into the program for five schools in each of the NFL's 32 markets.

"We're excited to see the constant growth of the Character Playbook program and now be able to offer it free of charge to any school who wants it," says Alexia Gallagher, vice president of philanthropy and executive director of the NFL Foundation. "Volunteerism is also an important aspect of character building and we're thrilled that Character Playbook's Character Challenge will encourage students to donate 100 minutes of their time - part of the Huddle for 100 to honor the league's 100th season."

Dallas quarterback Dak Prescott is set for his first pro game in his home state of Louisiana when the Cowboys visit New Orleans on Sunday night.

It isn't super sentimental for the 2016 NFL Offensive Rookie of the Year because he grew up a Cowboys fan near Shreveport, not far from the Texas-Louisiana line, and starred at Mississippi State. But the Superdome is the site of the state high school championship games, a goal Prescott didn't achieve at Haughton High.

The 26-year-old was an all-state quarterback as a senior, but Haughton lost in the quarterfinals.

"It would in high school if I had made it there, it would have had special meaning," Prescott said. "But right now it's another game, going on the road, always fun, knowing this environment, knowing the Superdome, knowing how their fans are going to be, the intensity, the atmosphere. I'm excited to go in there with my team."

Prescott remembers attending a Saints game as a high school player of the week. He said he was buying about 10 tickets for family, but wasn't sure how many would attend Sunday. Prescott figures it's his high school dream delayed.

"I believe that I'd be playing in this game, whether it was high school in the state championship or like I am today," Prescott said. "So yeah, I hope those kids back home use that and see that, see somebody that they can aspire after and try to go be better than, and one day being playing in the stadium for those guys, for us or any other NFL team."

The Arizona Cardinals will induct quarterback Carson Palmer into the club's Ring of Honor at halftime during Sunday's game against Seattle.

Palmer played for five seasons in Arizona and his .642 winning percentage (38-21-1) is the best for a starting quarterback in team history. He also owns the club's single-season records with 4,671 yards passing, 35 touchdowns and 104.6 passer rating, which all came in 2015. That's the year the Cardinals made it to the NFC championship game.

"He's deserving," Cardinals receiver Larry Fitzgerald said on Wednesday. "He's a great human being and an unbelievable quarterback for many years."